Beyond Happy gets Jim Bolger off to a Derby-winning start 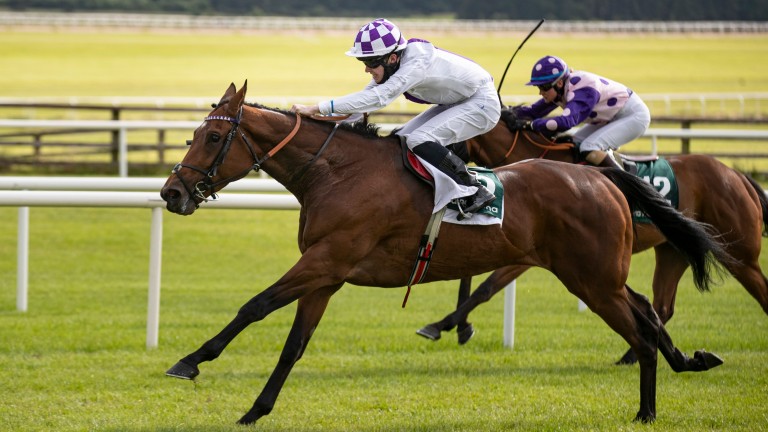 Beyond Happy and Luke McAteer win the Apprentice Derby at the Curragh
Patrick McCann
1 of 1
By Justin O'Hanlon 7:00PM, JUN 25 2021

The Derby Jim Bolger really wants to win is with Mac Swiney on Saturday, and maybe a good omen was set in the Friday night feature as his homebred Beyond Happy made almost all under Luke McAteer to land the Bord Na Mona Recycling Apprentice Derby.

It was a finely judged ride from the front by McAteer on the son of Fastnet Rock and he found enough in the last furlong to hold off the slow-starting outsider Allora Yeats by a length and a quarter.

Una Manning, representing her father, admitted she did not know whether making the running was the instruction and said: "The boss gave Luke his instructions before he came racing, he told him he thought the horse would win, and that's what he did!"

There was plenty of potential quality in the opening two juvenile maidens.

The Ger Lyons-trained newcomer Beauty Inspire quickened up in taking fashion for Colin Keane to land the opening contest and beat a good-looking bunch of equally inexperienced rivals to score by three and a quarter lengths.

The son of Mehmas has an entry in the Group 1 Phoenix Stakes here in August, which does not look remotely fanciful now.

Assistant trainer Shane Lyons said: "He's one we've always liked, he came well recommended. We don't always enter one in an early closer [Phoenix Stakes], but we did with this one. He has a very good temperament and showed us here what we think he is."

The fillies' maiden went to Alpha Centauri's sister Discoveries for Jessica Harrington and Shane Foley. She just held off the Ballydoyle newcomer Tuesday by a short-head.