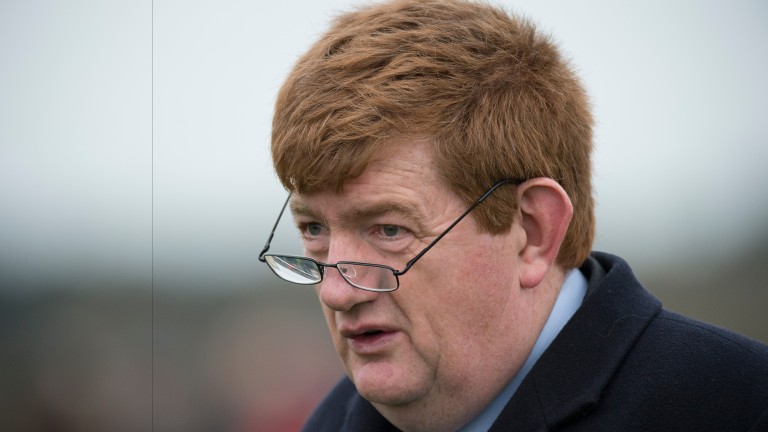 Shark Hanlon: is showing a healthy level stakes profit for the months of August, October, November and December
Edward Whitaker
1 of 1
By David Jennings 12:27PM, DEC 16 2016

Shark attacks have been more dangerous than ever since the summer. The popular Bagenalstown trainer boasts a healthy-level stakes profit for the months of August, October, November and December and Hanlon believes he will end 2016 on a high too.

Despite having only 11 horses in training, Hanlon is on course for his best season, with 15 winners in Ireland and six in Britain over jumps already, and he has devised a plan for the coming weeks that could see that tally soar.

Starting with Apache Outlaw in a handicap hurdle for lady amateur riders at Ludlow on Wednesday and finishing with Hidden Cyclone in a hurdle race at Punchestown on New Year's Eve, Hanlon has high hopes for the next fortnight.

“Things could not be going any better and I really want to finish the year off in style,” said Hanlon. “I'm sending Apache Outlaw over to Ludlow and I've booked Jodie Hughes for it. I think he might collect too. It looks the right race for him. Hopefully it will be the start of a profitable few weeks.”

Smadynium has been one of the key contributors to Hanlon's rich vein of form since the summer. Snapped up for just €4,000 from Julia Brooke, the eight-year-old grey has won at Fairyhouse and Clonmel and is now being aimed at the valuable Tim Duggan Handicap Chase at Limerick on December 27.

“Smadynium was a steal at just four grand and has been doing us proud. I am looking forward to seeing him have a go at the big handicap chase at Limerick. That looks tailor-made for him,” Hanlon said.

He added: “We are going to run Hidden Cyclone at Punchestown on New Year's Eve, Secrets Safe will go to Limerick and I have pencilled in a novice handicap hurdle at Leopardstown for Camlann who won for us at Galway. He's in good form. Mighty Stowaway will go for the maiden hurdle at Leopardstown I won a few years ago with Western Leader. We do not have a big team but we have a great team for the Christmas period.

“Rachael is a smashing girl and is a great asset to me. She has great hands and is riding out of her skin. I advised her to turn professional. Not everyone thought it was a good idea but I did and she has been doing me proud. We're on course for our best season,” Hanlon said.

FIRST PUBLISHED 12:27PM, DEC 16 2016
Things could not be going any better and I really want to finish the year off in style