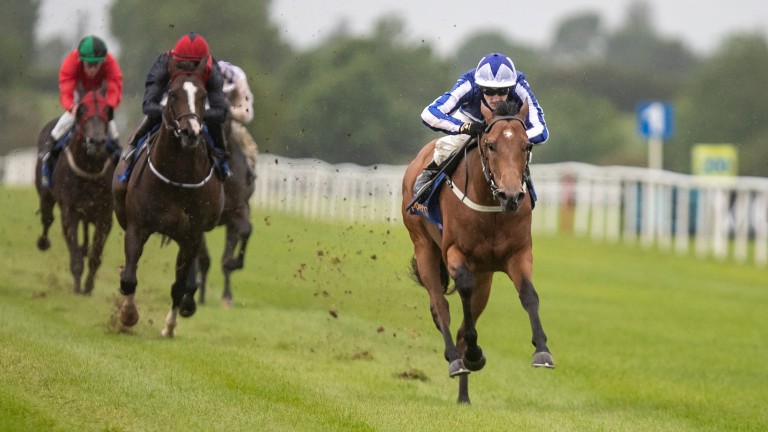 Sunday Sovereign (blue and white): makes his debut for Roger Varian in the Scurry Stakes
Patrick McCann
1 of 1
UPDATED 7:31AM, JUN 13 2020

Take this as a lesson for next week's Commonwealth Cup: over 6f at Ascot, you need to stay. The pure speedballs need not apply. Quite a few of them are running here instead, avoiding the test of the Commonwealth Cup and the long shadow of Battaash in the King's Stand.

Sunday Sovereign will draw plenty of eyes. He went off a warm order for the Norfolk last year, but things did not go to plan. That he has been absent for a year tells its own story.

Before that, he had looked an archetypal early two-year-old, all raw energy and nerviness with tons of class. His style is more explosive than new trainer Roger Varian tends to deal in, so he is an interesting experiment for this campaign.

It is fairly important on Sandown's 5f course to be drawn near the rail, in a low-numbered stall. Sunday Sovereign is in stall 3 and should have the speed to make it across, but his main rivals have avoided the widest boxes.

Immediately on his outside are Al Raya and Lazuli. The first-named won a Group 3, albeit one that was only just worthy of the name, at Chantilly when last seen in August. Lazuli still has potential, as he keeps shaping as though worth dropping from 6f and his only try at 5f came in the Cornwallis. He again pulled hard when second in a handicap off a mark of 100 last week. In theory, he should improve under these conditions.

On the inside of the big three in stall 2 is Dream Shot, who was second in the Flying Childers. He has had a run already, finishing third in the Pavilion. He could have gone to the Commonwealth Cup after that return, but a stiff 5f seems more likely to be his bag.
Keith Melrose, betting editor

James Tate, trainer of Dream Shot
He has an obvious chance. He ran very well in the Pavilion Stakes last week at Newcastle, although I don't think he stayed six furlongs, and ran well in the Dragon Stakes over this course and distance last year. I'm expecting a bold show.

Alastair Donald, racing manager to King Power Racing, owner of Sunday Sovereign
He came back from Ascot, where he ran disappointingly, with an injury that kept him off. He's been training very well and Silvestre [de Sousa] is excited about him. He's proven with some juice in the ground, so we're very hopeful he can get back to the high level of form he was showing.

John Quinn, trainer of Keep Busy
She's a very admirable filly and ran a good race at Newcastle where maybe the stiff six furlongs found her out. That was a pleasing comeback race, she's in calmer waters and the ground is perfect. I expect her to run a good race and the inside draw is fine.

Simon Crisford, joint-trainer of Al Raya
She's in good shape and I'm looking forward to her reappearance. I'm very happy with her and this looks like a good starting point.

Clive Cox, trainer of Hand On My Heart and Orlaith
Hand On My Heart was a debut winner last year and she's developed well over the winter. She's from a quick family that we know well and I just hope we don't get too much rain for her. Orlaith wouldn't mind the rain and makes her debut for us. She won at Listed level last year and is a well-mannered, good, strong filly.
Reporting by Tom Collins

FIRST PUBLISHED 6:00PM, JUN 12 2020
We're very hopeful he can get back to the high level of form he was showing