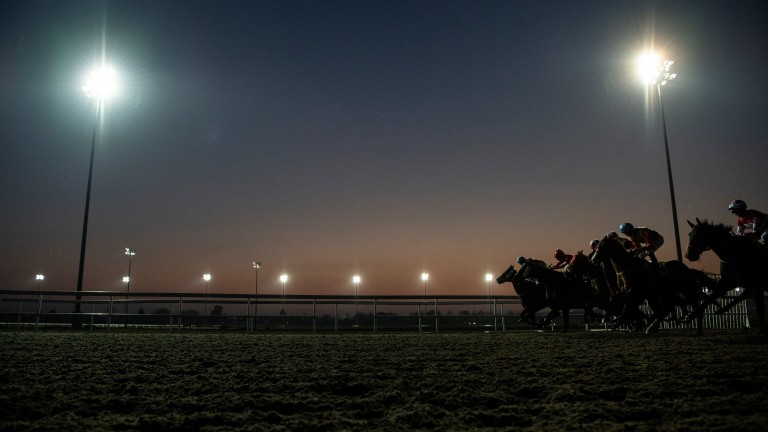 Apprentice Ryan M Moore is set for between six to eight weeks on the sidelines after fracturing three vertebrae in a fall at Kempton on Wednesday.

Moore fractured his T3, T6 and T8 vertebrae after being unseated from the John Best-trained Rodney Le Roc in the 6f apprentice handicap, with the saddle slipping following significant interference approaching the first bend.

The interference was deemed accidental by stewards and Best feels Moore, who was riding for his boss for the fifth time this year, was lucky not to be more seriously injured.

Best said: “Ryan is very sore and fractured three vertebrae but has been discharged from hospital. It’s going to take time to recover and he’s in a lot of pain. It’s frustrating for Ryan as he rides very well but he just needs a bit of luck and the one thing he didn’t need was something like this, particularly as he wasn’t at fault.

“He got knocked all over the place and they were lucky not to come down. It could have been an awful lot more serious. We thought Rodney Le Roc, who was fine this morning, had a chance of providing Ryan with his first winner so it was a shame and now it looks like it might be six to eight weeks before he'll be race-riding again.”

Punters urged to have their say on fixture list

Punters have the chance to air their views on what is right and wrong with racing's fixture list in a survey that was launched online on Thursday.

The Horseracing Bettors Forum (HBF), and independent group set up five years ago, launched its 2020 survey for all racing punters to share their views.

The survey asks for views on the number and type of fixtures, lunchtime racing and the geographic spread of meetings as racing's stakeholders discuss the 2021 fixture list.

Colin Hord, chair of the HBF which has meetings with the BHA, said: "This short survey will allow those who bet and enjoy horseracing to contribute to the debate on the size of the fixture list.

"It will also survey some perennial questions including the need for days with no racing, the quantity of racing on Saturdays, and the type of racing that should feature on a card."

No evidence was heard in the ongoing defamation case involving the Irish Horseracing Regulatory Board's head of security Chris Gordon and the Irish Racehorse Trainers Association on Wednesday due to a legal issue.

Mr Justice Barton allowed the jury to leave shortly after 3pm. The issue is expected to be cleared up by Thursday morning, when the IRTA is due to begin its case at 11am, with Noel Meade taking to the witness box.

Jockey Alison Clarke has been sidelined with a broken hip after a fall at Catterick on Tuesday.

The amateur rider was aboard Cairnshill in the 3m1f handicap chase when falling heavily two fences from home, causing a delay to the final race.

Clarke has had five winners this season, including her first which was achieved on King Golan in August.

James Wilcox has been appointed general manager at Huntingdon. A graduate from the Jockey Club Racecourses' programme, he will take over from Liam Johnson next month.

Formerly an event manager at Sandown, Wilcox joined the Jockey Club in 2015 and has completed placements in all four Jockey Club Racecourses regions.

He said: "It is a great honour to have been appointed as the next general manager of Huntingdon.

"As we saw recently with the excellent performance of Shishkin in the Sidney Banks Memorial Novices’ Hurdle, Huntingdon is a course capable attracting the country’s very best horses and I'm motivated by the opportunity to head up the team during what I’m sure will be an exciting few years to come."

The Old Berkshire Hunt's festival preview evening on Friday will feature a panel including Robbie Power, Henrietta Knight, Harry Whittington and Charlie Morlock, with Richard Pitman chairing. The event is at Uffington Village Hall and the doors open at 7.30pm.

There will be a cash bar and tickets are available and priced at £20. Apply to obhcheltenhampreview@gmail.com for tickets.

A Cheltenham Festival preview night has raised £1,556 in aid of a melanoma cancer charity. The event, which took place in Todwick, Sheffield, was put together and hosted by Bobby Beevers, who has appeared on ITV Racing.

It was held in honour of his father's charity, the Bob Beevers Memorial Melanoma Fund. 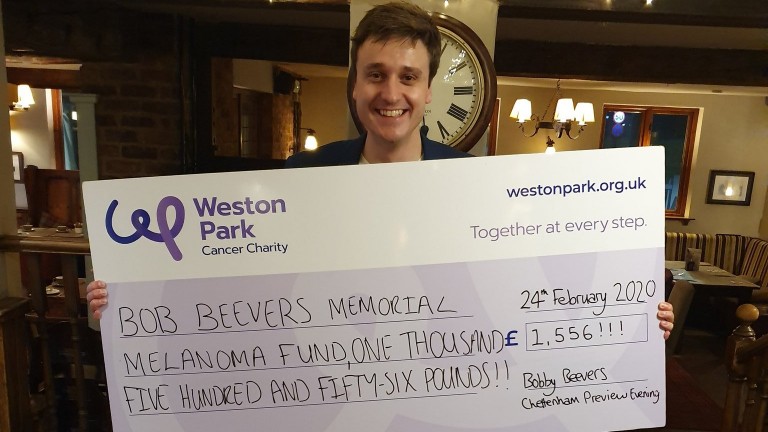 Beevers said: "It's unbelievable really. Personally I was thinking it was going to be £500-600, so to raise that amount was absolutely phenomenal. I can't thank everybody enough for their support.

"Bob Beevers was my dad, who was a huge racing fan, and it was through him I fell in love with the sport. I lost him in 2008 to melanoma cancer, and myself and my family teamed up with Weston Park Hospital in Sheffield to start the charity, and every penny we raise goes to them."

Andrew Thornton, Danny Cook, Chris Dixon and Jim McGrath appeared on the panel in front of a sold-out audience.

Fairyhouse is marking the 150th anniversary of the BoyleSports Irish Grand National by putting the call out for racing fans to submit their memories, stories and memorabilia involving the €500,000 feature.

Racegoers who have any photographs, racecards or tickets from past festivals are asked to share them, while the track is also seeking any interesting stories about Fairyhouse followers' experiences of the Easter Monday highlight.

The three-day festival, which runs from Saturday, April 11 until Monday, April 13, will feature many elements of the history and heritage, including photos and memorabilia, in an exhibition throughout the enclosure. There will also be a parade of Irish Grand National champions and a special commemorative racecard.

James Best returns to the saddle for the first time since sustaining a shoulder injury at Doncaster in December with two rides at Wincanton on Wednesday.

An unseat from Queen’s Magic in a Listed chase on Town Moor resulted in a dislocated shoulder for Best, who looks forward to riding Becher Chase hero Walk In The Mill in the Randox Health Grand National in April and praised the team at Oaksey House for their help in his recovery.

Best, who is riding Miss Harriett (4.20) and Ede’iffs Elton (4.50), said: "I can't wait to get back on the track. It’s been slightly frustrating on the sidelines and you never like missing rides but there has been an awful lot of racing off with the bad weather so I haven’t missed quite as much as I could have.

"The shoulder feels good and I've been riding out since last Thursday. Walk In The Mill was my first lot back riding out. He ran really well over hurdles on his most recent start and felt in good order the other day. I’ve been down at Oaksey House every day and they've been such a big help – we’d be lost without them."

Your chance for a say

Punters get the chance to have their say on the future of racing when the Horseracing Bettors Forum launches its 2020 survey on Thursday.

It will allow those who bet on horseracing to express their views on the fixture list, and possible changes to it, before the 2021 programme is finalised.

HBF chairman Colin Hord said: "This short survey will allow those who bet and enjoy horseracing to contribute to the debate on the number and type of fixtures there should be in the future. It will also survey some perennial questions including the need for days with no racing, the quantity of racing on Saturdays and lunchtime fixtures."

The link to the survey is http://tiny.cc/hbfsurvey and it will run from Thursday until March 31.

Kevin Schofield has been announced as the new director of communications and digital at the Betting And Gaming Council.  Schofield has an extensive background in print journalism, having worked for The Scotsman, The Herald, Daily Record, and The Sun.

Michael Dugher, chief executive of the BGC said: "The BGC is a new standards body committed to delivering big changes across the industry. To do that, we need top people.

"Kevin Schofield is one of the very best media professionals of his generation, he commands massive respect across journalism and politics, and he is an outstanding hire for the BGC.

"Kevin is joining an already top class and growing team at the BGC. This shows that we are building something exciting at the BGC as we strive to become the very best in the business."

Conor McNamara opts not to appeal

Conor McNamara will not be appealing against the ten-day ban he picked up at Fairyhouse on Saturday for his ride on Surfing Tenor.

The young conditional was hit with the lengthy suspension by the Fairyhouse stewards for failing to make a genuine attempt to achieve the best possible placing on Surfing Tenor in the 2m auction maiden hurdle.

Surfing Tenor, who was sent off 12-1, finished sixth behind Funky Dady and was found to be slightly lame post race. The horse was banned for 42 days.

Trainer Gavin Cromwell told the raceday stewards McNamara had ridden to instructions, however Cromwell was not satisfied with how the horse was ridden in the closing stages of the race.

McNamara said: "I've had a long think about it and I'm not going to appeal. I thought it was very harsh on the day, but I'm just going to keep my head down and not take it any further."

The memorial service for Gold Cup-winning trainer Robert Alner will take place on Monday, March 2, at Okeford Fitzpaine Church at 2.30pm. Alner, who saddled Cool Dawn to win Cheltenham's showpiece event in 1998 and Miko De Beauchene in the 2007 Welsh Grand National, died at the age of 76 in hospital earlier this month.

For all our exclusive free bet offers and must-have daily promotions, tap the free bets button or go to racingpost.com/freebets

FIRST PUBLISHED 5:26PM, FEB 26 2020
It’s frustrating for Ryan as he rides very well but he just needs a bit of luck and the one thing he didn’t need was something like this

'He changed the face of racing' - promotional pioneer Tony Fairbairn dies at 87 Goodwood Cup second Away He Goes lined up for 'exciting' Melbourne Cup bid 'Heartbreaking' end for mare whose trainer slept in her stable to nurse her 'Like a man folding a deckchair' - amateur legend Brod Munro-Wilson dies at 76 Family affair as apprentice jockey Elle-May Croot rides her first career winner Views from the sofa: 'Racing is not, and never will be, a team sport'