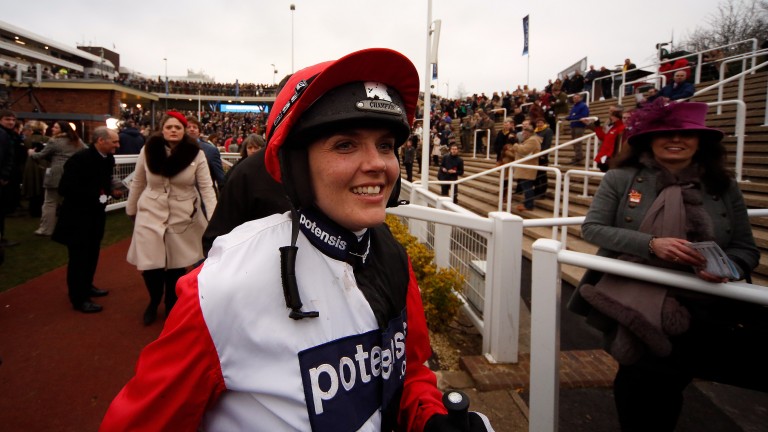 Betfair's Barry Orr has defended Victoria Pendleton, the subject of the firm's 'switching saddles' campaign, who under new BHA rules would have been preventing from riding in the 2016 Foxhunter Chase, in which she finished fifth.

Although he said he understands why new riding restrictions have been introduced for the amateur race, Orr stressed that the former Olympic cycling gold medallist had received the support and advice of an outstanding team of professionals from start to finish. He added she would not have persevered had she considered herself to be a danger to herself or others.

He said on Wednesday, a day after the changes to the Foxhunter race conditions were unveiled: "We worked within the parameters set out by the authorities throughout, but first and foremost always deferred to the team of experts we'd gathered around Victoria – Yogi Breisner, Lawney Hill and Paul Nicholls, and, most importantly, Victoria herself and whether she felt she was up to it.

"Right from the start Victoria was incredibly dedicated and Yogi was relaying to the wider team throughout where she needed to be and where she was at. At every stage she was at the proficiency level she was supposed to be at within that time frame.

"Fingers crossed it goes as well with Rio, who shows the same dedication and shares quite a few of Victoria's personal traits."

He added: "Our campaign had a successful conclusion for all concerned – not just Victoria and Betfair but racing. It's going to be more difficult to do that sort of thing in the future, but it's up to the individual and how much they want it."

Ferdinand, who brought the curtain down on one of the most decorated careers in English football in May 2015, announced last month he was training hard as a boxer, with the ultimate aim of competing professionally for a belt.

Orr said: "Rio's training hard with Richie Woodhall [former Olympic medallist and winner of various belts], who's a top quality trainer, and they're working hard. Rio has the same focus and determination as Victoria and every other elite athlete. There are a lot of parallels.

"It's one step at a time. For Victoria the first target was simply to get a licence, and it's the same for Rio as his first major step is to get his licence from the British Boxing Board of Control. Hopefully he'll reach the required level in the next couple of months or so."

There are currently 148 category B licence holders, while another 55 from the jumps fraternity are category A, as Pendleton was last year, and no longer eligible for the Foxhunter.

Two of the four who took part this year with category A licences have already graduated to category B and the others theoretically still have time, although Callum Miller, who in this year's race pulled up his own horse Lets Get Serious, points out he would need five days off work to be granted a category B.

Miller, a pupil-assistant to Karl Burke who runs a point-to-point yard with his partner Mia, said: "Riding for me was just a stepping stone towards training and as my riding career never really took off it's just for fun now, but I've been riding all my life.

"I've had point-to-point winners and winners under rules, and I'd just never gone for the category B as I'd never needed it and I'm too busy at work.

"If we had a point-to-pointer good enough to go next March I'd now have to get another rider, and that will be frustrating, because like a lot of category A amateurs, I've been riding all my life and I'm more than competent.

"Victoria Pendleton was completely different. She'd been riding for only a year."

Pendleton gets the wheels back on point-to-point career

FIRST PUBLISHED 5:46PM, OCT 25 2017
Our campaign had a successful conclusion for all concerned – not just Victoria and Betfair but racing