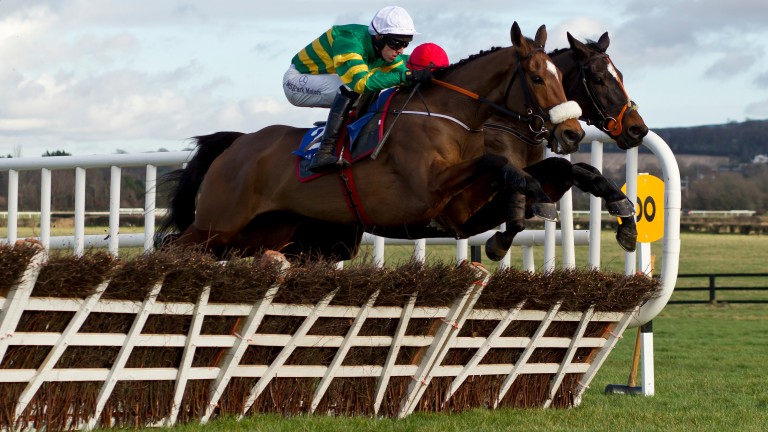 JP McManus will be making a bold bid for a third successive major hurdles win at Newbury on Saturday – but ante-post punters who have forced handicap snip Sutton Place into clear favourite for the Betfair Hurdle face an anxious wait as the team weigh up their options.

An easy winner of the Grade 3 Limestone Lad Hurdle at Naas since the weights were published, Sutton Place is officially 10lb well in, even with his 5lb penalty.

On Sunday night he was a top-priced 11-2 chance with Sky Bet and significantly shorter in most lists, but McManus owns no fewer than eight of the 41 horses in contention for the £155,000 race, including the sponsor's joint-second and fourth favourites in Movewiththetimes and Consul De Thaix.

With McManus having won the Cleeve Hurdle with Unowhatimeanharry and the Contenders Hurdle with Buveur D'Air over the past two Saturdays, punters will be eager to know his number one hope for the Betfair, a race he has won in recent years with Get Me Out Of Here and My Tent Or Yours.

His racing manager Frank Berry said on Sunday: "We'll leave a decision about running Sutton Place for a few days, and if he does travel we hope he'll have enough experience for such a competitive race.

"Of our other entries, De Name Escapes Me and Movewiththetimes are intended runners. We could run a few more, but Modus will not be running."

Backing McManus's top hurdlers ante-post has been something of a minefield of late, owing to a few late changes of plan, but trainer Nicky Henderson said he hopes to run Consul De Thaix and Hargam in the Betfair.

The absence of Modus means Renneti will head the weights. His trainer Willie Mullins said: "We have a few in the race and Renneti is an intended runner. Thomas Hobson might also take his chance, but Footpad is unlikely to run."

Footpad is instead set to wait for the Stan James Champion Hurdle or the Sun Bets Stayers' Hurdle.

Clyne, another of the market leaders and also officially well treated, is very much on course.

Trainer Evan Williams was thrilled with the seven-year-old's second to The New One in Haydock's Champion Hurdle Trial and is putting his faith in the handicapper, who has him 5lb well in.

Clyne (second right) delighted Evan Williams when runner-up to The New One at Haydock
Martin Lynch (racingpost.com/photos)
Williams, who cannot recall having a runner in the race, said: "Clyne is 100 per cent on course and everything is grand. It's going to be a very different race to Haydock, as there'll be plenty of them and it will be very, very competitive, but we're 5lb well in and that's always worth a lot.

"The handicapper is never wrong in races like this, and if Clyne runs the same race as last time he'll be there with a chance."

Williams added: "He doesn't do a whole lot at home as he's a light-framed horse, but he's well. The one thing I'd say is that to be at his best the more rain we had the better. It's soft there as we speak, but he'd handle extreme ground."

FIRST PUBLISHED 6:54PM, FEB 5 2017
We'll leave a decision about running Sutton Place for a few days, and if he does travel we hope he'll have enough experience for such a competitive race

JP McManus: if I lose I don't have a bet for two weeks - it doesn't bother me