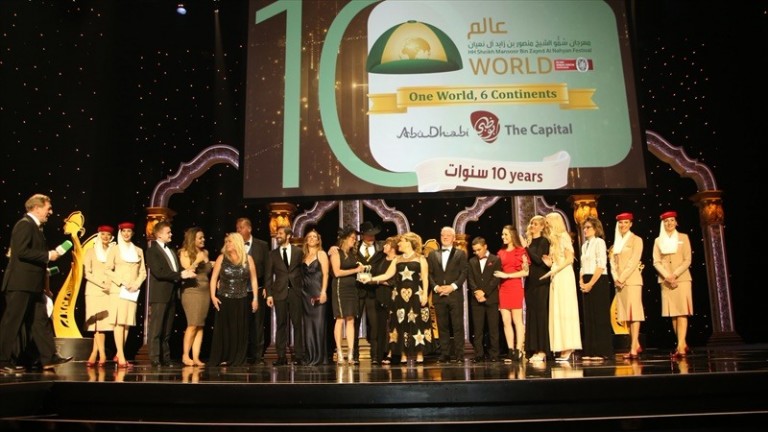 Connections of Paddys Day accept the Horse of the Year Award at the Dolby Theatre
Sheikh Mansoor Festival
1 of 1
By Zoe Vicarage 5:57PM, APR 24 2018

Hollywood, where the biggest names in the US film industry assemble every year in the Dolby Theatre for the Oscars, this month played host to a different star, the Arabian horse and the 31st annual Sheikh Mansoor Bin Zayed al Nahayan Global Arabian Horse Flat Racing Festival Darley Awards and the Sheikha Fatima Bint Mubarak Darley (International) Awards.

Over 500 guests from around the world gathered for a glittering ceremony in Los Angeles as the achievements of those who excelled in the worldwide Arabian racing programme in 2017 were celebrated.

The Global Arabian Horse Flat Racing Festival Darley Awards honour those in the US, while the Sheikha Fatima Bint Mubarak Darley (International) Awards recognise the achievements of women in racing.

This year the awards coincided with The Year of Zayed - the 100th anniversary of the birth of the founding father of the United Arab Emirates, the late Sheikh Zayed Bin Sultan Al Nahyan.

Arabian racing in Britain was strongly represented with four nominees on the night - Beverley Deutrom in the best trainer category, Heather Philpott as best owner for her mare Unity Belle, Ellie Mackenzie as best amateur jockey and Megan Rose as best photographer.

It was Deutrom who was celebrating on the hallowed stage as she was named best trainer. Having purchased her first horse, Phritz, at the age of 26 and without having a trainer or jockey Deutrom took on both roles - a decision well rewarded as she recorded three victories on him.

Thus begun her training career with Arabians and last year her biggest star was Storm Troupour, who ran three times and won over seven furlongs at Chelmsford in August.

Accepting her award, Deutrom said: “This is fantastic. I’m honoured to be here. Thank you to Sheikh Mansoor and Sheikha Fatima for their support that is allowing me to race Arabian horses around the world.”

Horse of the year: Paddys Day

Paddys Day, who last year had won the HH Sheikha Fatima Bint Mubarak Darley Award Stakes at Santa Anita under leading jockey Victor Espinoza, was unable to take part in this year’s edition as he was returning from Dubai. However, he created history at the awards as he won the horse of the year accolade for a third year in the row.

Having become the first US Arabian horse to earn more than $1 million, Paddys Day has taken Scott and Lori Powell on a remarkable journey since he hit the Arabian racing scene.

Lori Powell said: “What a whirlwind of an evening! Winning one Darley is an honour of a lifetime, but winning four in one year is unprecedented for us.

“The icing on the cake was, of course, Paddys Day again making history by his Horse of the Year honours for a third year in a row. Scott and I are so very honoured and proud of our magnificent boy.”

The familiar red and white silks of Allegro Arabians, the name under which Joe and Betty Gillis operate, came to the fore throughout, taking home the four-year-old filly award for Sweet Honey AA, owner of the year and breeder of the year award in the US section. Betty Gillis was also recognised in the international category, being named as best breeder.

Their success continued at Santa Anita a day later when their filly Quick Sand AA went one better than last time out to beat her stablemate Easter Man - also Gillis owned - in a blanket finish to the Grade 1 HH Sheikha Fatima Bint Mubarak Darley Award Stakes. 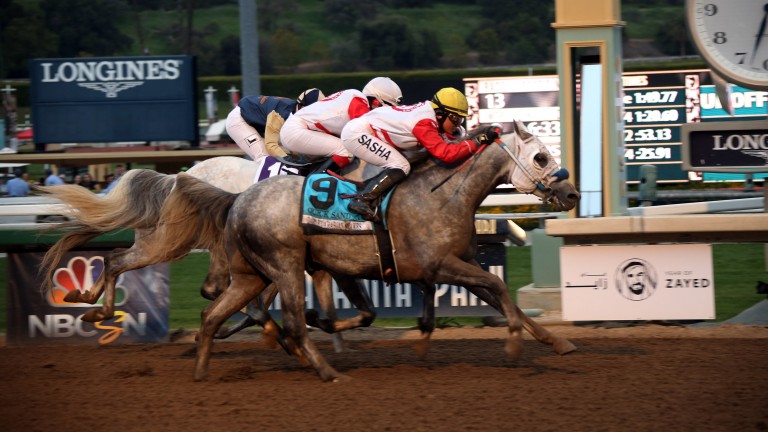 The pair had dead-heated in the Sheikh Zayed Stakes at Sam Houston racetrack in March and for Quick Sand AA’s jockey Sasha Risenhoover, it was her biggest career victory to date.

Risenhoover said: “I was confident, as I liked my horse going in. When we broke out of the gates, the way the race played out I just sat off and held him up.

“When I asked him for his life he gave it to me. I’m new to riding Arabian horses, it’s very different and I love it.

“To be able to win here at this great race place and win my first Grade 1 is great. I love this racetrack.”

Joe and Betty Gillis were unable to celebrate their string of achievements across the three days due to unforeseen circumstances but had plenty of people celebrating for them.

The HH Sheikh Mansoor Bin Zayed Al Nahyan Global Arabian Horse Flat Racing Festival executive director Lara Sawaya added: “The icing on the cake was the winning jockey of the Grade 1 $100,000 HH Sheikha Fatima Bint Mubarak Darley Award Stakes for Purebred Arabian horses being a lady - Sasha Risenhoover on Quick Sand AA - a reflection of the support Her Highness Sheikha Fatima Bint Mubarak, Chairman of the General Women’s Union, Supreme President of the Family Development Foundation (FDF) and Head of the Supreme Council for Motherhood and Childhood, Mother of the UAE extends to women in all fields.”

Three days of celebration concluded with a gala dinner at the Beverly Hills Hotel where the Year of Zayed was marked and Sawaya said: “The year 2018 is being celebrated as Year of Zayed and the year also marks the 100th birth anniversary of the late Sheikh Zayed Bin Sultan Al Nahyan, founding father of the UAE and a passionate promoter of Arabian horses.

“It was a proud moment when the California Senate commended both the contribution of the late Sheikh Zayed and also that of the festival through a resolution presented at the conclusion of the gala dinner.”

The World Arabian Horse Racing Conference continues to be sponsored by the Sheikh Mansoor Festival, with 2018’s edition to be held in Madrid next week.

The latter two series are designed to raise the profiles of female riders and apprentices internationally as well as offering opportunities to ride in venues in Oman, Morocco, Australia, the US and culminating in the World Finals in Abu Dhabi on November 9.

The finals of the ladies and apprentice series take place on the same card as the richest Arabian race in the world, the Sheikh Zayed Bin Sultan Al Nahyan Jewel Crown worth €1,200,000.