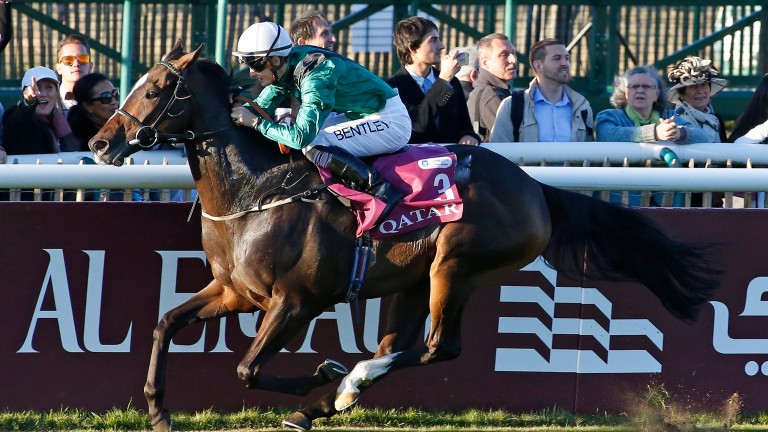 Limato: rider Harry Bentley confident his mount can get the trip
Alan Crowhurst
1 of 1
By Tom Kerr at Santa Anita 9:57AM, NOV 2 2016

Harry Bentley has played down doubts over seven-furlong specialist Limato's ability to handle the trip in Saturday's Breeders' Cup Mile, in which the exceptional Prix de la Foret winner will face Queen Anne winner and reigning champion Tepin in one of this year's headline clashes.

The Henry Candy-trained Limato, bidding to become Britain's first winner of the Mile since Barathea in 1994, has tackled a mile only once before, when he finished fourth in this year's Lockinge Stakes.

"I think his Lockinge run was a very good run," said Bentley. "I know he finished fourth but it was his first run of the season and Mr Candy's horses at the time weren't 100 per cent.

"The ground was softer than ideal and it was a straight mile, so I think there were a lot of positives to take out of that race, and we're coming into this full of confidence.

"Having seen the track, it looks a relatively easy mile, nice and flat. If he's going to get a mile this is his best chance of getting it. I'm happy with how it all looks."

Limato will have a first public workout on Tuesday but Bentley, 24, has been gaining invaluable experience of the track with US Hall of Fame trainer Richard Mandella since he jetted in on Saturday.

Although a well-travelled regular in the Middle East, this will be Bentley's first experience of riding in America, and arguably the biggest race of his career.

He said: "I've had a bit of international experience but this is different altogether, I've never been to the States so it's brilliant to see how it all works.

"If I can pick up another ride, that would be the aim; it's not going to be easy to pick up a spare but it would be fantastic if I could."

Tepin blotted her copybook last time, ending an eight-race winning streak, six of them in 2016, with a Grade 1 second at Keeneland when given too much to do behind a freewheeling front-runner.

However, Bentley is under no illusions about the challenge she represents and continued: "She's a superstar, isn't she? She's done incredibly well, but was second last time which shows she's beatable. It's a massive match-up but I'm confident I'm on a good horse.

"After Keeneland they're not going to make a mistake like that again so I can imagine she'll go in front and probably try to dictate things. But she's had a hard season, she's been pretty heavily campaigned, so if there are any chinks in the armour it would be that she's had plenty of runs."

Arc heroine Found has swerved a Breeders' Cup Classic bout with California Chrome and Arrogate in favour of the Turf, in which she will line up alongside stablemate Highland Reel and bid to repeat last year's victory at Keeneland.

Connections had been leaning towards a debut run on dirt in what looks an intimidatingly strong Classic, for which bookmakers had made her fourth favourite behind the tightly-matched market leaders and Godolphin's Frosted.

The switch to familiar ground in the Turf is a late change of heart for her Coolmore connections, who had been leaning towards having another shot at ending Ballydoyle's long wait for a victory in the feature Breeders' Cup race.

In advance of Monday's draw, Found was reinserted into the Turf market as favourite by Paddy Power and Betfair Sportsbook, at 15-8 and 2-1.

FIRST PUBLISHED 6:11PM, OCT 31 2016
Tepin has had a hard season, she's been pretty heavily campaigned, so if there are any chinks in the armour it would be that she's had plenty of runs