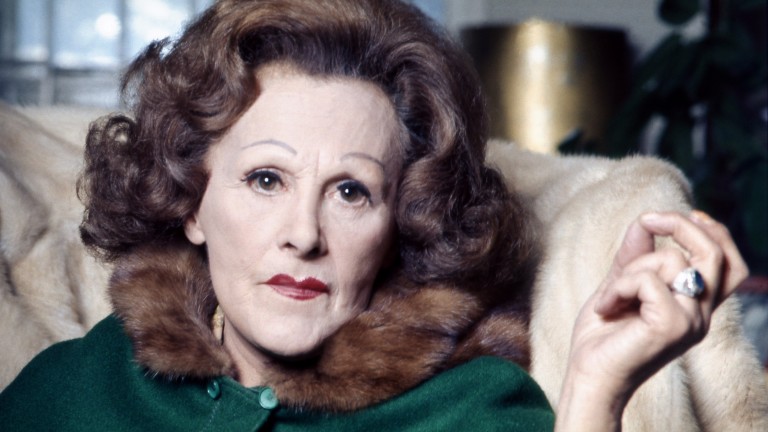 Well, I knew all about Betty Shine but I must say one or two of Fanny Cradock's gifts had passed me by.

It seems they were both well acquainted with famous figures from the past. Betty, a Brighton medium who advised former goalie David Icke, told him he was here to heal the earth and would be world famous. This much became clear from a phone conversation with Socrates (the Greek-Athenian philosopher, not the Brazilian midfield man) via an 800-year-old Chinese priest. To be fair, David is quite famous, though the first part may take a little longer.

Fanny, the daughter of a butterfly collector who was married to Bijou, an actress and singer, claimed to be on intimate terms with the court of Louis XIV. At the age of 17 she eloped with her first husband to Brighton (where else?) but he soon passed away and she met Johnnie, an old Harrovian. They were together for 50 years.

There are several famous stories from the BBC cookery years, the best one featuring Johnnie's carefully-scripted 30-second piece at the end, when he invited viewers to send in for the recipe. This was always word-perfect and exactly 30 seconds in duration. Indeed, he was incapable of cutting it back, always a worry when a programme goes out live.

One day, forced to halve the length – and with an anxious floor manager hardly helping the situation – his precis began: "So there we are, ladies and gentlemen, if you want scones that taste like Fanny's . . ." Needless to say, people loved him even more after that.

They came into the radio sports department on one occasion and I remember it quite vividly because it was Ayr Gold Cup day, 1984.

There was a discreet afternoon drinking club near the Baker & Oven, just off Marylebone High Street in those days and Benny, one of the regulars, a sprint handicap devotee and a proper punter, had narrowed it down to Able Albert and Alakh.

I recall gambling conversations more or less word for word and I mentioned to him that all he needed was the 'A's to come good at Ayr. Indeed, I thought the main danger was Amarone, a superb Italian red when things are going well. But he was deeply into horses trained by Jeremy Tree and Alakh was the call. He had this mental picture of Monica Sheriffe's horse going clear on the far side, with Able Albert doing his best up the stands' rails.

Whether there can ever be justification for a £100 straight forecast, with no saver at all, in a race like this is open to question. However, I had a feeling he was on the 'end it or mend it' road and I've travelled it a few times myself so I wished him well.

I cannot maintain eye contact when an important horserace is in progress so the Cradocks came and went as I fussed around pretending to edit something while the television murmured away, up on the wall behind my left shoulder.

When pressed for a tip these days, commentators will fudge and dissemble like newcomers to a house of pleasure; mustn't get it wrong, oh dear me no. Reputation and all that. Not so Graham Goode, who on this famous day in 1984 makes the point that Able Albert, drawn 29 of 29, is "extremely well in". When he repeats this, even I am with him, though my main bet resembles Benny's. Anyway, Alakh bursts clear on the far side and surely holds on for Pat Eddery. Graham thinks so and so do I, even though I'm pointing the wrong way because I cannot be seen to ignore famous guests in favour of a sprint handicap.

As we know, Able Albert got up by an inch, costing Benny in the region of £10,000. He went away for a while and managed not to emulate the hero in a short story by Balzac called The Last Napoleon, in which a young man takes his time before entering a gambling parlour in Paris, loses his last gold coin, then heads for the Pont Royal and the ultimate solution. It's not the dead of night, either, it's late afternoon.

Benny came back eventually and I bumped into him in Soho; the Mazurka, I think. It's a strange thing but Roger Charlton, who took over from Jeremy Tree, has Projection in the Stewards' Cup on Saturday. All we need is something trained by the Easterbys on the opposite wing, though there's no telling if we'll recoup, of course.

Not unless we bump into Betty Shine.

This is available free as a sample. Members can read the latest RPSunday interviews, features and columns on racingpost.com from 6pm every Saturday

FIRST PUBLISHED 6:00PM, JUL 29 2017
I cannot maintain eye contact when an important horserace is in progress so the Cradocks came and went as I fussed around pretending to edit something

'I had to learn online basics just to bet' - how the pandemic changed punting The drugs bust, the stun gun and the most extraordinary Royal Ascot finish 'Life moves on' - Sir Michael Stoute looks forward after his most painful year Alastair Down is invited into the wonderful world of the truly unique Derby hero Steve Cauthen: 'I was bulimic at times - and at some point you crack' 'I was caught by the dream – and it's gone on to become a compulsion'
Bookmaker
Price
E.W. Terms
bet365
Open Account
Ladbrokes
Open Account
William Hill
Open Account
Coral
Open Account
Paddy Power
Open Account
Betfair
Open Account
Sky Bet
Open Account
Sporting
BetVictor
Boylesport
888sport