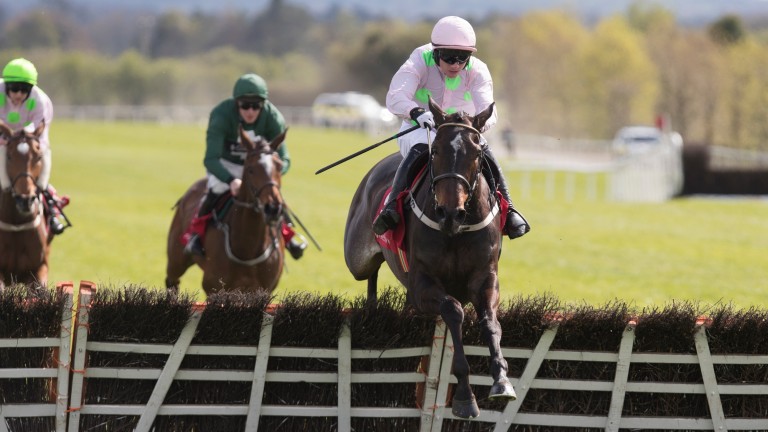 Benie Des Dieux becomes the third horse to do the Cheltenham-Punchestown double this season
Patrick McCann
1 of 1
By David Jennings UPDATED 6:08PM, APR 28 2018

Do you know what nickname Willie Mullins has given to the third horse to complete the Cheltenham-Punchestown double this week? Benie Des Douvan. It tells you all you need to know.

"At home I call her Benie Des Douvan," smiled Mullins after Benie Des Dieux posted a more straightforward success than her hard-earned one at Cheltenham.

"I thought after her first win she had the ability of Douvan. I wondered whether she was a female version of Douvan. She's as good as I thought she was.

"My aim all year was to win the mares' hurdle at Cheltenham and hopefully come back here, and she has done both things properly. She's a real good mare."

A real good mare, indeed. Only real good mares win the Grade 1 Mares' Hurdle at Cheltenham and follow up here. Apple's Jade did the double last year but she has not looked the same animal this year and faded into third having been sent off 5-6 favourite.

Despite gaining the measure of Apple's Jade at Cheltenham, Benie Des Dieux was allowed to go off at 3-1.

Yet she belied those odds with a stylish win under Paul Townend, always doing enough to fend off the late surge of Augusta Kate.

She was only the third horse to follow up Cheltenham glory with Punchestown success - Footpad and The Storyteller being the other two.

Could we see Benie Des Dieux over fences next season given how awesome she looked when winning a beginners' chase at Limerick in 2016 by 30 lengths and how comfortably she disposed of her rivals in Listed company over fences at Naas in February?

Mullins replied: "I want to see what there is over fences for her. Are there races for her over fences that I want to go for? I imagine that's her finished for the season. Saying that we could be tempted by France, though probably not."

Owner Rich Ricci would certainly love to see her back over fences.

He said: "She was very good and it was a great win. I've always liked the mare and would like to see her back over a fence. That's her game. She's a brilliant jumper and today showed she's not short of pace either.

"I couldn't believe Apple's Jade was so short. But she's a great mare and I'm sure she'll bounce back."

Benie Des Dieux was cut into general 3-1 joint-favourite for the 2019 Grade 1 Mares' Hurdle at Cheltenham with stablemate Laurina, the hugely impressive winner of the mares' novice hurdle at the festival last month.

British raider Midnight Tour, who had split Benie Des Dieux and Apple's Jade at Cheltenham, fared less well here, finishing sixth under Davy Russell, for whom it was still a memorable day as he collected the champion jockey prize.

FIRST PUBLISHED 4:05PM, APR 28 2018
I thought after her first win she had the ability of Douvan. I wondered was she a female version of Douvan