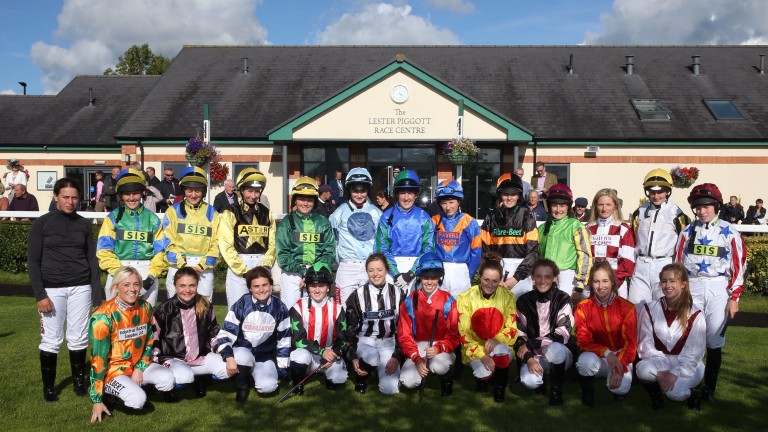 Sisters are doin' it for themselves. Ella McCain and Abbie McCain were just two and four when granddad Ginger won his fourth and final Grand National with Amberleigh House in 2004, and they have grown up watching dad Donald take the stable to the next level.

Now it is their turn to make the headlines, and they provided a remarkable conclusion to Carlisle's #amazingmonday ladies' night, a unique card featuring an all-female cast of jockeys, taking it in turns to win the final two races.

"I don't think I'll have many better days' racing in my life than today," said proud father Donald, a significant statement from a man who has trained Cheltenham Festival winners and has a Grand National win in his own name with Ballabriggs in 2011. 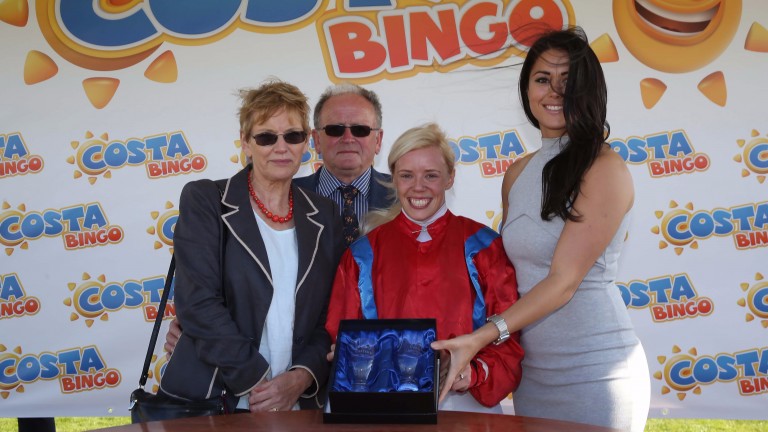 Olympian Sam Quek presents the prize to Cliff's owners Mr and Mrs Burton, and jockey Faye McManoman
John Grossick
Ella had a winner on her first ride, at Carlisle last month just eight days after she turned 16, and she was the first of the sisters on the scoresheet on Monday thanks to Tawseef in the 2m1f handicap. Half an hour later the family were celebrating again as 17-year-old Abbie took the 1m3f handicap on Diamonds A Dancing, owned by mother Sian.

The trainer said: "I'm getting a great kick out of the girls riding and thoroughly enjoying it but I never thought anything like this could happen. You can't help but have huge satisfaction, I'm chuffed to bits, and I've managed to train a winner for my missus, which is even more important!"

Any jockey riding a winner on the card is eligible for a chance to land a £20,000 Jockey Club development award in the opening contest at sister track Haydock on Saturday, something Emma Sayer managed last year.

McCain does not have any horses entered in the Haydock Park Ladies' Trophy but will be keeping an ear out for possible mounts for his daughters. 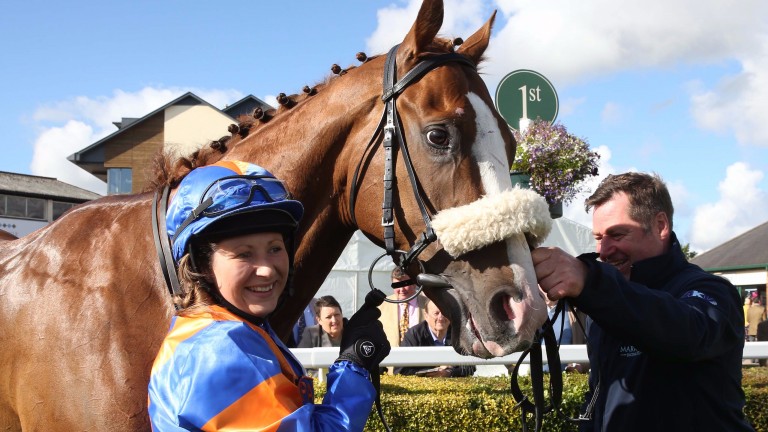 A first ride and a first winner for Kelly Adams on the Noel Wilson-trained Our Place In Loule
John Grossick
He said: "They were going to go to Ayr on Saturday but I'm here with [jockeys' agent] Richard Hale and he helps both of them, so we'll see what we can do. Beg, steal or borrow!"

The Gin Tin and the prosecco bar were proving more popular than the Guinness pumps on #amazingmonday, but the black stuff's old mantra 'good things come to those who wait' still rang true for Kelly Adams.

The amateur was having her first ride at the age of 28 and grasped the opportunity in fine style with a smooth win on Our Place In Loule in the opening 5f handicap.

A delighted but slightly shell-shocked Adams said: "I'm 29 this month and it's a long awaited first ride! I ride that horse every day and I absolutely adore him."

It was a first win at the 16th attempt for the Noel Wilson-trained four-year-old, who had been demoted from first at Musselburgh 13 days earlier for interference.

Adams, who has an eventing background and used to work for Richard Guest, added: "I've worked at Noel's since November and I'm so grateful that he and Mr Paver [owner Graham] have given me the opportunity. It was all a bit of a blur but he kept going for me."

Wilson is having an excellent season, having moved to Barnard Castle, and was full of praise for Adams, saying: "She's a cracking girl, she works hard in the yard and she's made a difference to this horse at home. He's a bit of a fruitcake.

"She rides him, she loves him, and it was always the plan for her to have her first ride on him."

The bond between horse and rider was also evident after Faye McManoman won the second race on Cliff, and her smile lit up the winner's enclosure as she celebrated her second career victory.

"I absolutely love him," beamed the 24-year-old apprentice. "I do everything with him at home, I ride him out and look after him."

Nigel Tinkler, who trains the seven-year-old, said of McManoman: "She's lovely. She rides well, works hard, she's really enthusiastic and deserves it. She looks after the horse and the horse loves her. She's won twice on him now, it's absolutely fantastic."

Rachel Richardson was another to give herself the opportunity to emulate Sayer thanks to a double on Suitcase 'N' Taxi and Parole, both trained by Tim Easterby.

The experienced apprentice said: "It's fantastic to have a winner tonight. It's a great buzz for all the girls and the atmosphere in the weighing room is unbelievable. It's competitive, but really great fun."

John Baker, regional director of Jockey Club Racecourses, owner of Carlisle, said: "When we first came up with the idea for an all-female card in 2011 there were people saying it would never work, but we've stuck with it and it's a great night.

"It's a really nice crowd, 4,000-odd people, and the girls look forward to it. I hope it does something for the sport."

Jane Elliott was the other jockey to qualify for a shot at winning the development award, taking the mile handicap on Les Eyre-trained El Principe, and the prize was presented by Jo Whiley, who was doing a DJ set after racing, and Sam Quek, who won Olympic gold in 2016 as a member of Britain's female hockey team.

Quek, a JCR ambassador, said: "Women's sport at the moment is huge; the cricket and football has been on the TV and been amazing, and we've got the rugby going on this week, and it's the start of this movement.

"It's slowly been coming, but with the success of our national teams, and with more female jockeys coming through, it's a really exciting time."