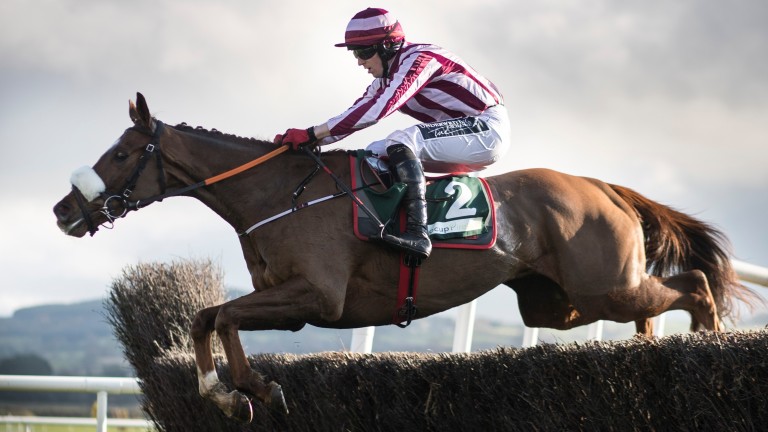 Ben Dundee gets off the mark over fences at Punchestown three weeks ago
Patrick McCann
1 of 1
By Tony O'Hehir UPDATED 7:27PM, DEC 7 2018

Ben Dundee would be an entirely appropriate winner of the Grade 3 Klairon Davis Novice Chase, the feature event on Navan's Saturday card.

Chris Jones, owner of Ben Dundee, is a son of Chris Jones, who owned Klairon Davis, a star chaser of the 1990s whose 20 career wins included the Arkle Chase at Cheltenham in 1995 and the Queen Mother Champion Chase in 1996.

Ben Dundee, who got off the mark over fences at the second attempt when scoring at Punchestown three weeks ago, carries the same maroon and white striped colours as Klairon Davis, who was trained by Arthur Moore and died this year at the age of 29.

Gordon Elliott, trainer of Ben Dundee, is also represented in the five-runner event by Hardline, a 15-length winner on his chasing debut at Fairyhouse in October before finishing second to Voix Du Reve in the Grade 2 Craddockstown Novice Chase at Punchestown last month.

"Both horses are in good form and are going into the race off good performances last time. The trip and the ground should be fine for them and it's difficult to split them," Elliott said.

Us And Them, who represents Joseph O'Brien, won over the course and distance last month when he beat subsequent winner Duca De Thaix, while the other chase winner in the line-up is the Margaret Flynn-trained Dr Mikey, who made all to score narrowly over 2m4f at Gowran Park last month.

Completing the line-up is the Henry de Bromhead-trained Or Jaune De Somoza, who finished third behind Jetz on his chasing debut over this course and distance two weeks ago.

FIRST PUBLISHED 6:00PM, DEC 7 2018
Both are in good form and are going into the race off good performances last time. The trip and the ground should be fine for them