Bellshill shines as Mullins continues to unleash the big guns 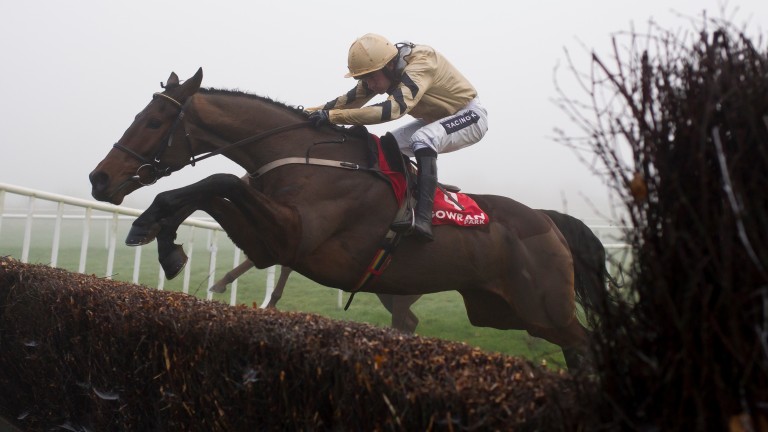 Bellshill and Ruby Walsh fly the second-last during an impressive chasing bow at Gowran Park
Patrick McCann
1 of 1
By Justin O'Hanlon 5:30PM, NOV 26 2016

The first half of the season may well have been dominated by Gordon Elliott after he compiled the fastest ever century of winners in a jumps season, but champion trainer Willie Mullins has not gone away and he continued the process of unveiling the big guns with a vengeance at a fogbound Gowran Park.

He teamed up with Ruby Walsh and owners Andrea and Graham Wylie to land a significant double on the day, highlighted by the very impressive chasing debut of leading staying novice hurdler Bellshill.

With the track enveloped by worsening fog, not very much of this 2m4f begnners chase was visible but what could be seen was impressive. The field was well strung out with Bellshill sauntering home by ten lengths and a jumping display described by Ruby Walsh as "spectacular".

Mullins added: "From what I could see he jumped great and when Ruby asked him for one at the second-last he gave it to him. He can step up to three miles any time."

Earlier, Invitation Only put his unbeaten record on the line in a hot looking 2m maiden hurdle, and looked to be involved in a real struggle coming to the final flight, but even a mistake at that flight didn't cost him as he quickened up takingly to beat multiple French bumper winner Barra by two and three quarter lengths.

The strength of the form is emphasised by the way the pair pulled clear of dual bumper winner New To This Town and Listed-class Flat filly Island Remede.

"We'll find a nice novice for him over Christmas and I would think going up in trip won't be a problem for him," said Mullins, who added: "We think he stays all day but I was delighted to see him show that turn of foot. They opened up a nice gap to the third and they are no slouches. He's a nice one to look forward to."

Relief for Lynch as Zabana scores

After seeing short-priced favourite Ben Dundee resoundingly beaten in the 2m novice hurdle earlier in the day, Andy Lynch was feeling the nerves as stable star Zabana stepped up to face four rivals in the 2m4f chase, but he put his act together well under Davy Russell. His jumping in the second half of the race was crucial as he held off the late surge of the possibly unlucky Kitten Rock by a length and a half, and he was given an 8-1 introductory quote for the Lexus Chase at Leopardstown by Paddy Power.

Fog beats them in the end

With the fog worsening as the afternoon went on, the concluding handicap chase was called off in the interests of safety. Clerk of the course Paddy Graffin commented: "I asked the riders after the beginners chase if they were able to see the next fence and they said it was starting to be a struggle."

Fog or no fog, it was impossible to shroud the quality of the two Willie Mullins winners and what they might achieve. It truly is a wonderful time of the year.

FIRST PUBLISHED 5:30PM, NOV 26 2016
We think he stays all day but I was delighted to see him show that turn of foot