Bell: Fabricate should be competitive after recent return 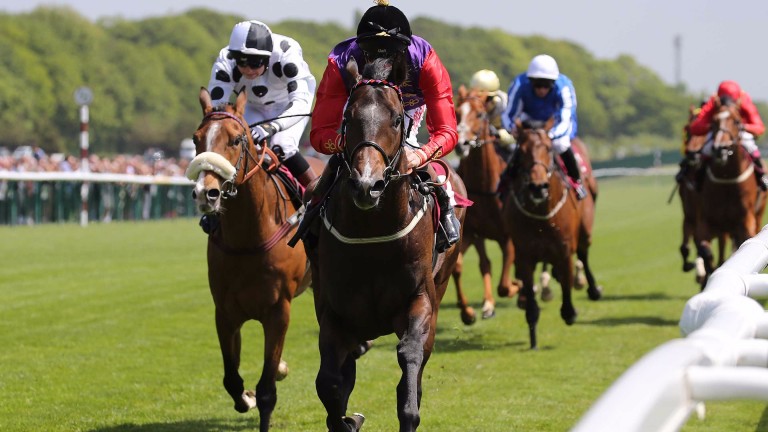 Mark Johnston was among the most vocal critics of Newcastle's decision to ditch its Flat turf track for an all-weather surface, but he was never going to let a middle-distance handicap worth £85,000 go by without representation and runs Abareeq and Final.

Harry Bentley gets a rare call-up from the yard to partner Abareeq, who won twice last month, while PJ McDonald partners Final, second at Pontefract on Tuesday.

Like Final, the George Scott-trained Hamelin is a course-and-distance winner.

Star riders
Last season's champion jockey Jim Crowley rides Mustajeer, while Josephine Gordon, who won the apprentice crown, is aboard To Be Wild. Mustajeer was eight and a half lengths in front of To Be Wild when they met in a Newmarket maiden in 2015.

Dream team
Daniel Tudhope and David O'Meara have already bagged one big handicap this term - the Lincoln with Bravery - and team up here with topweight Tawdeea.

Steward in charge?
Louis Steward, who rides Fabricate for the Queen, had a tricky time last year, but can be relied on in big handicaps with an Ebor, Cambridgeshire and Balmoral on his CV.

Michael Bell, trainer of Fabricate
He looked as though he needed the race at Wolverhampton on his first start of the season, just getting a bit tired in the final furlong. He looks to have come on for that run and should hopefully be competitive.

Charlie Johnston, assistant to Mark Johnston, trainer of Abareeq and Final
Abareeq is clearly very talented on this surface and won very impressively when upped to this trip at Lingfield. They crawled round at Chelmsford next time and he was boxed in and never came off the bridle. That was a bizarre race, and conditions here will suit him much better. Final ran very well at Pontefract and if he had jumped better it might have been close. The step up in trip should help.

Marco Botti, trainer of Well Hacked
I was very pleased with his second at Kempton and although he's gone up 4lb he'll have come on for the run and the extra furlong will help. I wouldn't have chosen stall 14, but it's a nice galloping track and he should cope.

Saeed Bin Suroor, trainer of Good Run
He's doing really well and I don't think the drop to a mile and a half will be any problem.

James Fanshawe, trainer of Lord George
He seems in excellent form at home, which we're hopeful he will transfer onto the racecourse. George Wood did him last year, but had to give him up due to his riding commitments. He's going to ride and take 5lb off his back. I think all the partners are very happy he's riding him.