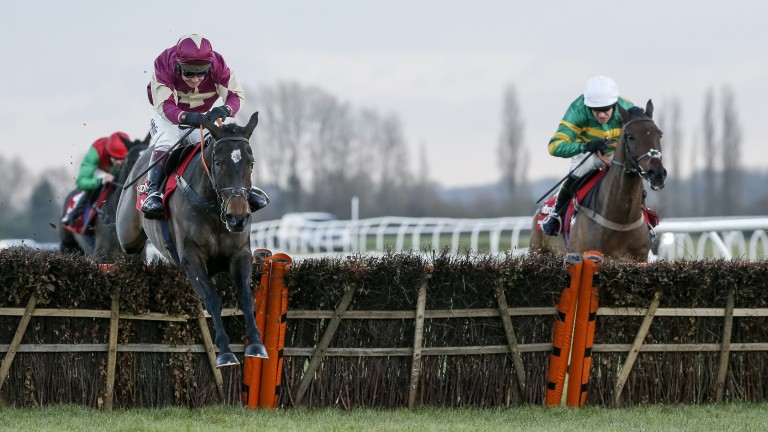 Beer Goggles clears the last ahead of Unowhatimeanharry in the Long Distance Hurdle
Alan Crowhurst
1 of 1
By Graham Dench 11:30AM, JAN 24 2018

Shock Newbury winner Beer Goggles will have his Sun Bets Stayers' Hurdle credentials tested thoroughly when he takes on Finian's Oscar and Wholestone in the galliardhomes.com Cleeve Hurdle at Cheltenham on Saturday.

Richard Woollacott's diminutive seven-year-old caused one of the upsets of the season so far when a 40-1 winner from Unowhatimeanharry in Newbury's Ladbrokes Long Distance Hurdle.

But he will be much shorter odds in a race regarded as a key festival trial after bookmakers made him a top-priced 5-1 chance in early shows for the Grade 2.

Woollacott is looking forward to the race and said: "Beer Goggles is ever so well and we are pleased with where he is. We took him to an away gallop on Saturday to give him a change and he did a good piece of work, so he's in good nick.

"Wholestone [last in the Newbury race] looked a miles better horse last time, and you have to respect Finian's Oscar too, but we just keep pinching ourselves at the improvement Beer Goggles seems to have made. Really heavy ground would be a slight worry, but I don't suppose we will get that and what will be will be. "

The Colin Tizzard-trained Finian's Oscar will be reverting to hurdles after suffering two defeats over fences since winning at Chepstow and Cheltenham.

Five horses out to boost their festival claims at Cheltenham

A top-priced 3-1 chance with bet365 and Paddy Power, he has yet to prove himself at 3m but was a dual Grade 1 winner as a novice over hurdles.

The same card's JCB Triumph Hurdle Trial, won last year by Triumph winner Defi Du Seuil, has been reopened after only eight entries were received. Henderson is known to have entered We Have A Dream as well as Triumph Hurdle ante-post favourite Apple's Shakira.

FIRST PUBLISHED 7:29PM, JAN 22 2018
Beer Goggles is ever so well. We took him to an away gallop on Saturday to give him a change and he did a good piece of work, so he's in good nick