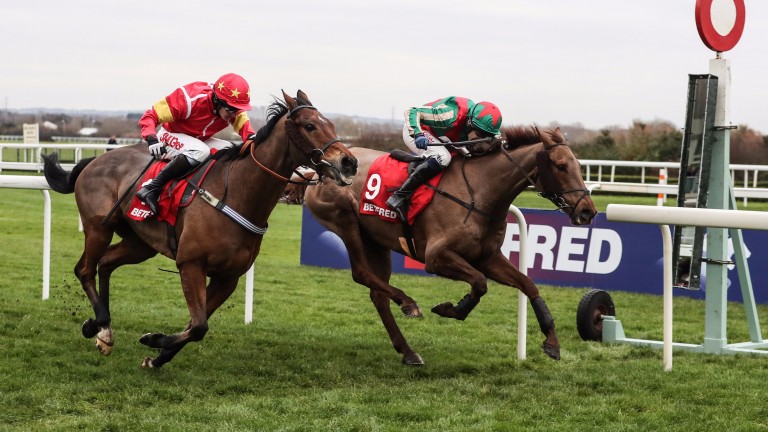 Becher Chase principals Vieux Lion Rouge and Highland Lodge will be able to reoppose in April
GROSSICK RACING PHOTOGRAPHY 0771
1 of 1
By Lee Mottershead and Richard Forristal 7:33AM, FEB 15 2017

The penalty point could yet resurface

The question of whether all the right horses were able to run in last year's race raised its head when both Becher Chase winner Highland Lodge and Bishops Road, successful in Haydock's Betfred Grand National Trial, failed to make the cut.

That triggered a debate over whether winning certain races should secure automatic entry to the National, while some argued penalties should be applicable for those who scored after the release of the weights, as is the case for other handicaps.

Aintree and the BHA opted to maintain the status quo. They will, therefore, be happy to see this season's Becher hero, Vieux Lion Rouge, has a certain place as number 40, while Highland Lodge, touched off close home in the latest Becher, is almost sure to be safe as one of six horses, in effect, bracketed together in 41st position.

That said, there is still scope for future rumblings, given Gas Line Boy and Goodtoknow, both prominent in the betting for Saturday's Haydock trial, are among those sharing 63rd position and are therefore far from safe.

It does, therefore, seem strange an established trial for the National continues to be scheduled four days after the publication of the weights.

The Brits are far from bad but prone to a spill

The strength of Ireland in this year's weights gives the impression the British challenge is set to be below par.

That could well be true, albeit only to an extent.

Against those numbers, this year's principal Brits, The Last Samuri (161), Alary (160) and Minella Rocco (158), are far from an embarrassment, although it is worth pointing out that if one takes into consideration the fourth highest-rated home-trained horse, More Of That, three of the top four British entries either fell or unseated on their latest outing.

Auspicious, that is not.

Movement aplenty at head of weights

There has increasingly been a trend for top jumps horses to move around from one yard to the next, largely due to owners deciding to dispense with the services of a trainer and sending animals elsewhere.

That is very much evident at the head of the National weights, given the top four horses on the page were all based last season with someone different to their current trainer.

Champagne West, who earned his number two spot on the list by running away with the Theyestes Chase, moved from Philip Hobbs to Henry de Bromhead, who himself lost a number of horses when Alan and Ann Potts went elsewhere.

No douze points for cocktails and canapes

It was a case of all change for this Grand National weights launch, with the event moving from its traditional lunch format to a cocktails and canapes event. Add in a new sponsor and a new host, with Ed Chamberlin taking over in light of ITV becoming the race's broadcaster, and this really was a very different affair.

That said, whether there was much wisdom in trying to give the revealing of the weights a dramatic atmosphere akin to the points announcement at the end of the Eurovision Song Contest is debatable.

Trainers were not told the weights in advance of the function – except for Brian Ellison and Gavin Cromwell, whose thoughts featured in an embargoed press release circulated earlier in the day – while the media and bookmakers were either left ignorant, or had to pretend to be ignorant, until 9pm, as a result of which some major newspapers opted not to bother attending.

Many would welcome a return to the lunchtime format in 2018, even if the lunch consists only of a few sandwiches.

The arbitrary manner in which Phil Smith approaches the handicapping of the Grand National field continues to puzzle.

Whereas his established policy has been to reduce highly-rated horses to encourage connections to run, this time he has raised Outlander to a mark of 166 from an Irish rating of 164, with Empire Of Dirt, Don Poli and Carlingford Lough also being asked to run off elevated marks.

Quite what Outlander has done to warrant being rated higher than any other horse that has contested the race in modern times – including Gold Cup winners Synchronised, Imperial Commander and Lord Windermere and previous National heroes Many Clouds, Don't Push It and Hedgehunter – is an absolute mystery to me.

Given his stated desire to see better horses tackle the race, has Mr Smith chosen to artificially create one, in the absence of an authentic star?

Conferring any unique handicapping criteria on the National is wrong-headed and undermines the race's stature.

FIRST PUBLISHED 9:02PM, FEB 14 2017
It does seem strange an established trial continues to be scheduled four days after the publication of the weights