Beat The Bank has been the star of Srivaddhanaprabha's expanding string 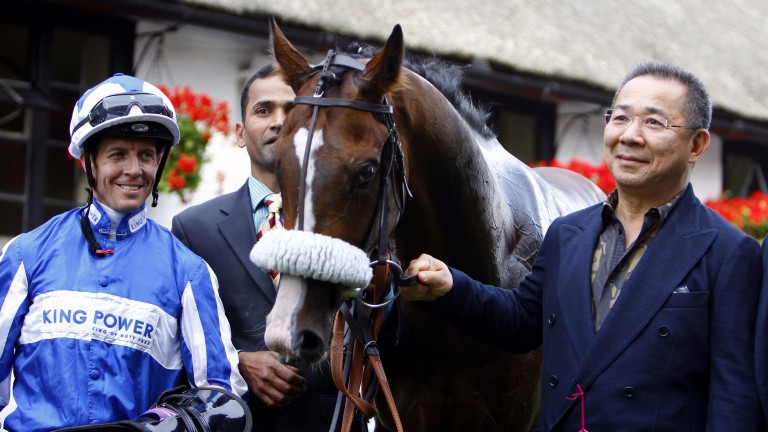 Three-time Group 2 winner Beat The Bank is the best horse to have raced in the increasingly familiar blue and white silks of Leicester City owner and chairman Vichai Srivaddhanaprabha.

Based with the owner's main trainer Andrew Balding, Beat The Bank was a private purchase from the Curragh yard of Darren Bunyan last year and quickly developed into a smart performer, bolting up in the Joel Stakes just over a year ago.

He added the Summer Mile and Celebration Mile to his CV this term, and connections are hoping his breakthrough success at the highest level could come in December's Longines Hong Kong Mile.

Balding enjoyed further Pattern success for the operation as recently as Saturday when Morando dead-heated in what is known as the St Simon Stakes, while the trainer's Donjuan Triumphant has made the frame in this term's Sprint Cup and British Champions Sprint Stakes.

"He's entitled to win a really nice race in testing conditions at some stage," Balding said of the mudloving Donjuan Triumphant recently.

A big-spending emerging force at the sales, Srivaddhanaprabha also enjoyed Listed success in 2018 with Vintage Brut and Well Done Fox and many of his horses carried the Fox prefix in their names in a nod to his football team's nickname; Fox Vardy honoured the East Midlands side's star striker Jamie Vardy.

Balding was by far King Power's best supported trainer, saddling 28 winners from 159 British runners, while Richard Hannon and Ralph Beckett were among others employed.

King Power has had 246 runners in Britain this year, which have resulted in 41 winners.

A replay of Morando dead-heating in the St Simon