Battle of the yards paints perfect picture of racing rivalry

Brightening your day with tales from beyond the tracks 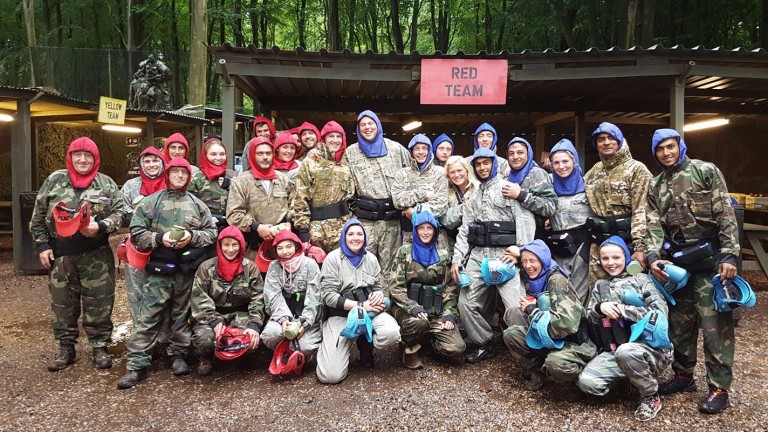 The BHA may need to consider extending the reach of its new stewarding model to off-course events after a paintballing session between the George Scott and Charlie Fellowes yards turned "brutal".

The two teams donned combats and helmets on Monday as part of a belated Racing Staff Week outing, but any message of industry unity was soon lost amid the sound of paint pellets being fired – primarily at the trainers themselves.

"I have quite a few bruises, and it's safe to say Charlie and I were target number one!" says George. "The guy who ran it was pretty shocked. He said it was the most brutal game he'd ever seen – but we won."

Clearly rivalry between the two yards extends well beyond the reaches of the track and, without the watchful eye of any stewards, it seems play may not have been all that fair.

"George's team cheated appallingly," claims Charlie. "Every time they got hit they just kept on running, whereas my team displayed exemplary sportsmanship. I felt Team George Scott Racing were far from accurate in their interpretation of the rules."

Charlie, who reports he is also sporting two rather large bruises on his behind, adds: "It's been well documented recently that racing is really struggling to attract people, and it's so important not only to make the job more attractive, but also to say thank you to the staff."

George concurs: "When you're working with animals it's even more important to have a good team and they put in a huge amount of time and effort – my staff are fantastic, they're hungry like I am, but it's also important for them to enjoy themselves."

Every heart matters for Frankie

Frankie Dettori took time out from his race-riding return to unveil the 'Every Heart Matters' appeal on Monday, a campaign to help build a new cardiac centre at West Suffolk Hospital.

The My WiSH Charity is aiming to raise £500,000 to support the development of a state-of-the-art suite. An increase in patient demand over the last five years has prompted the mission to transform the care on offer. West Suffolk NHS Foundation Trust is investing £5.2 million in the project, with the additional funding required to bring the whole unit together in a purpose-built centre. 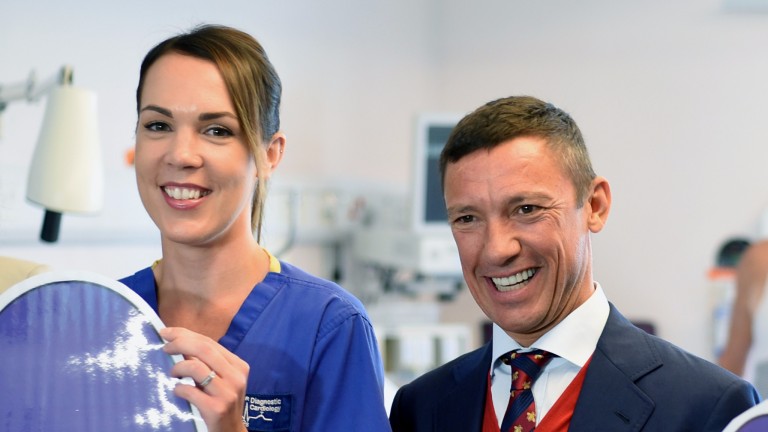 Frankie, the appeal's ambassador, says: "I've spent 31 years in Newmarket and consider myself a Suffolk person – the appeal is very much local to me and my family and we all have the opportunity to support great new facilities in our hospital.

"This is the biggest appeal that the charity has taken on, so let's hope we get the funds to make the dream a reality."

Click here to for more information and to donate.

This year's Retraining of Racehorses National Championships at Aintree will be even bigger and better following the addition of the RoR Dressage Championship to the mix.

Running from Tuesday, August 22, to Sunday, August 27, the six-day gathering will be a full-on celebration of everything retrained racehorses have to offer, with classes for novices, veterans, and everything in between. Numerous champions will be crowned including the prestigious ROA and Goffs UK Supreme Champion, who will net his or her owner £2,500.

The curtain falls with a gala dinner on the Sunday evening at which Aintree ambassador and sporting soprano Laura Wright will perform.

Spectators can attend all six days of the festival free of charge.

Congratulations to the Ontoawinner syndicate which celebrated its 100th winner at Ayr on Monday. The syndicate, which was established only in 2011, hit the century with Cosy Club, trained by Adrian Keatley.

Three notable retirements this week – we wish Cathy Gannon all the best in her new career as a jockey coach, while Trip To Paris and Hawkeyethenoo bow out with heads held high.

Confirmed runners and riders for the Gold Cup at Royal Ascot 'Palace Pier looks like the best miler for a long time but Ascot suits us' Dominant duo Moore and Dettori set to extend stranglehold on riding honours Can one-of-a-kind Jim Bolger pull off more Group 1 heroics with Poetic Flare? Who is Frankie Dettori riding on day one at Royal Ascot on Tuesday? One trainer, one jockey, one horse and one race to note on Royal Ascot day one