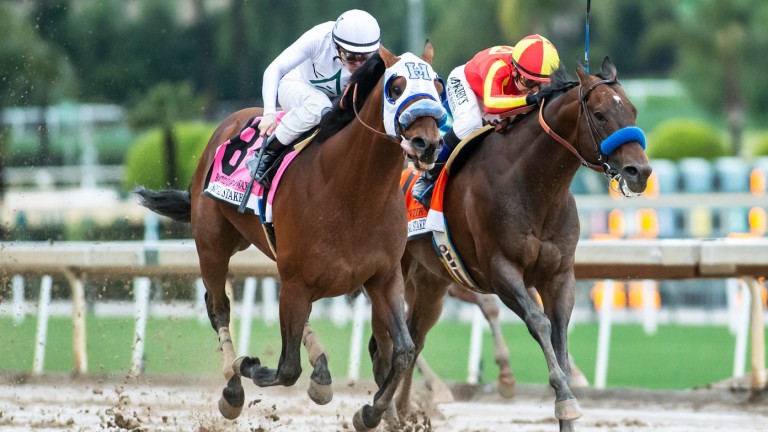 Battle of Midway (left) edged past McKinzie in the San Pasqual Stakes
1 of 1
By Bloodhorse/Jeremy Balan 3:32PM, FEB 3 2019

If you were handicapping jockey behaviour early in the second turn of the $200,000 Grade 2 San Pasqual Stakes at Santa Anita on Saturday, 1-2 favourite McKinzie looked like a clear winner.

Although he was between horses, his two rivals – Giant Expectations on the inside and Battle Of Midway on the outside – appeared to be hard at work.

Jockey Flavien Prat, aboard Battle Of Midway, even brought out the whip to give his mount a couple of cracks to keep up as Mike Smith sat aboard McKinzie looking patient and with plenty of horse under him.

But as Giant Expectations faded, the closing stages were owned by Battle Of Midway and McKinzie, and the horse who needed some reminders to keep up in the turn had plenty of fight left.

Until the final strides, little separated the two Grade 1 winners in a duel to the line, but Battle Of Midway found just enough on the outside to prevail by half a length.

"I think the key was being outside," Prat said of the Jerry Hollendorfer-trained son of Smart Strike owned by Don Alberto Stable and WinStar Farm.

"The draw was very important. I don't think either horse likes to get pressure inside, and I was able to stay just outside of McKinzie the whole way. My horse likes to play around a little when he makes the lead, but he still finished good."

Battle Of Midway, who broke from the outside in the field of five, pretty much shadowed McKinzie (who left stall four), all the way around the racetrack. When McKinzie made his move in the backstretch, Battle Of Midway moved too, and never lost touch.

"I broke in front of him, but if I had to do it over again I would have taken my horse back," Smith said.

"I thought we could get McKinzie, and I thought Prat rode a great race," Hollendorfer said. "The other horse fought back, but we got lucky in the last couple of jumps."

The San Pasqual was the fourth graded win for Battle Of Midway, who was bred by Thor-Bred Stables in Kentucky out of the Grade 1-winning Concerto mare Rigoletta. He has now earned more than $1.5 million in 16 starts.

Harvey Wallbanger a shock to the system in Holy Bull

There was the way everyone expected the $350,000 Fasig-Tipton Holy Bull Stakes to go down, and then there was one Harvey Wallbanger.

Racing up the rail in the 1m½f Grade 2 at Gulfstream Park on Saturday, the son of Congrats threw a 30-1 wrench in the plans of 9-10 favourite Maximus Mischief when he galloped straight and true into the picture as one to watch on the road to the Kentucky Derby.

With a gritty run under Brian Hernandez jnr, Harvey Wallbanger went from the back of the pack to the front and from maiden special weight winner to graded stakes victor in the span of 1m 43.69s, the final time for the three-year-old contest. The bay colt was making his stakes debut here for trainer Ken McPeek and strung together back-to-back victories after he began his career with three consecutive runner-up efforts.

Maximus Mischief finished third to suffer his first loss in four starts, as he was unable to withstand the inside challenge of the winner after gaining the lead from front-runner Epic Dreamer in the stretch.

McPeek said: "It's a horse race. You can't duck one, can you? He showed he had some good, solid ability. I was thinking he'd rise up to whatever level you put him in.

"All we did last fall was really kind of teach him what to do. The end of the season he was a little tired after his fourth race, and we backed off, came down here, and took our time." 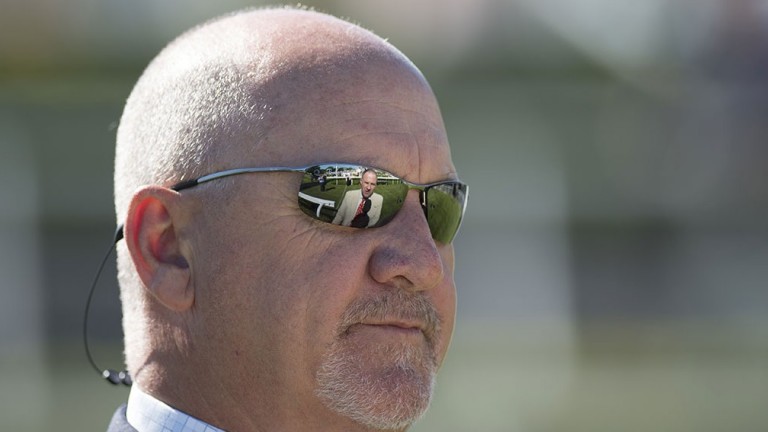 Hernandez executed the plan to perfection. "It was great," he said. "We had a horse that likes to come from behind, and we thought they'd go quick in front. I was able to just kind of sit there. I knew to trust in my horse because he was second in a couple of good maiden races, and he always runs to his competition, so I thought he'd give a good showing today.

"We'd have been happy if he'd have been second or third, but for him to jump up and win showed that he's a good horse and he's turned into a good three-year-old. When we turned for home and I got within range of them, I thought I had enough horse to where I'd get past them. I mean, he spurted through there quickly, and he did it like a good horse."

With the Holy Bull victory, Harvey Wallbanger earned ten points on the road to the Kentucky Derby, good for 12th spot on the leaderboard.

"Let's just enjoy the evening here and then figure it out," McPeek said of future plans for his Holy Bull winner.

"I've already got Signalman kind of circled for the Fountain of Youth, but that doesn't mean that they both couldn't run. I'd like to keep them apart if I can, but one step at a time."

FIRST PUBLISHED 3:32PM, FEB 3 2019
The draw was very important. I don't think either horse likes to get pressure inside

'This is a dream' - Zurekin a gallant third for the Leech team in Prix la Barka 'I wish the Cox Plate was in two weeks' - Zaaki stars for rookie Brit trainer Fury, lawsuits but 'no flailing away': how US no-whip racing has been received Bob Baffert and Medina Spirit owner file lawsuit over Kentucky Derby test result