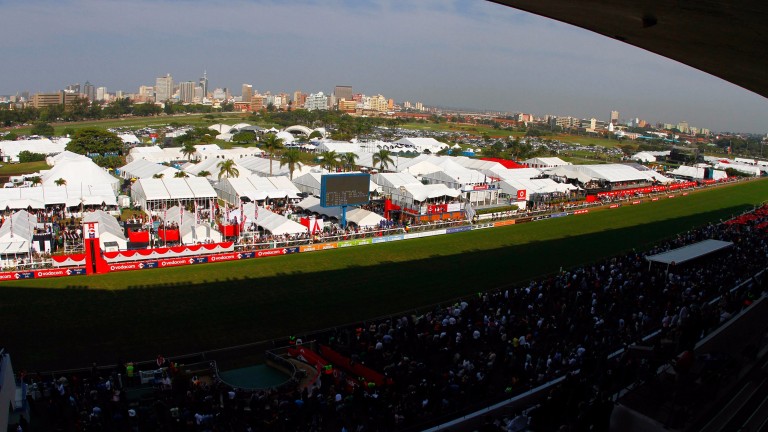 Candice Bass-Robinson became the first woman trainer to win South Africa’s greatest race – the Grade 1 Vodacom Durban July handicap –when 17-1 chance Marinaresco got up in the last stride to become only the second horse to defy topweight since El Picha scored for the second time in 2000.

Bernard Fayd’Herbe, 35, who also scored on the other topweight – dead-heater Pocket Power in the same colours in 2008 – rode a patient waiting race on last year’s runner-up but had to switch right to get a run inside the final furlong. He beat 4-1 favourite Al Sahem by a head.

Fayd’Herbe said: “I was waiting for him to get going but at the end I wasn’t sure if I had got it. But S’Manga Khumalo on Al Sahem shouted across to me ‘you’ve won.’”

Mrs Bass-Robinson, who also had the fourth and the sixth, took over the licence from her father Mike Bass at the beginning of the season. He won the Durban July three times including with Pocket Power.

She said: “I was watching the other two horses and I didn’t even know that I had won the race. I’d thought Marinaresco looked out of it.”

The winner was to go to America with five or six other top South African horses early this year but the venture fell through.

Part-owner Marsh Shirtliff had intended to put him into quarantine tomorrow but this also failed to come off. Now he is planning to send him abroad next year.

Delpech said: “This is a very good filly and this was the best I’ve known her. She is phenomenal.”

FIRST PUBLISHED 5:40PM, JUL 1 2017
I was watching the other two horses and I didn’t even know that I had won the race