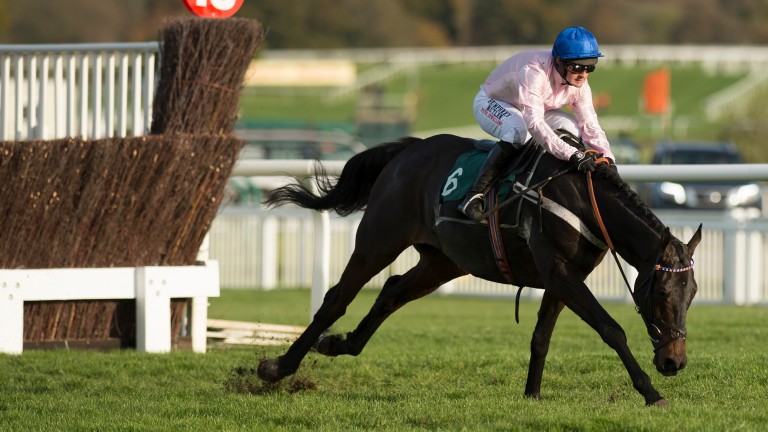 Ben Pauling is confident Barters Hill will return to the racecourse but as a slightly slower horse after the trainer was robbed of his stable star's services for an indefinite period due to a tendon injury sustained at Cheltenham.

The eagerly-awaited chasing debut of the smart staying novice hurdler ended in a sad anti-climax when the festival fourth was pulled up by David Bass in front of packed grandstands following the seventh fence of the track's novice chase.

Victory went to the potentially high-class recruit O O Seven but, while the race provided reasons for Nicky Henderson to be pleased, his former assistant Pauling was left to reflect on a rotten slice of luck.

Pauling said: "He was wanting to rejoin the race and wasn't crippled lame, but he has slipped his tendon off a hock.

"It's not career-ending but he'll require a certain amount of time off. Whether he'll be back this season all depends on how severe it is, but with a horse like Barters Hill patience is everything.

"He doesn't deserve it and it's a terribly sad day but we still have him. Let's hope it's only a stumbling block. He'll return to racing but he'll definitely want three miles not two and a half, as they lose a bit of speed."

Aside from nodding at the penultimate fence, O O Seven – twice a Grade 1 second over hurdles – enjoyed a scare-free round and produced a performance that led to BoyleSports quoting him at 20-1 for the RSA Chase and JLT Novices' Chase.

"He's a gorgeous horse and this is what we've been waiting for," said Henderson.

"They run in bumpers and novice hurdles but this is where his life really begins. His technique has always been very special and you have to be good to come here on your first time over fences."

Rider Nico de Boinville added: "I think eventually he may end up at three miles but I think for now we'll leave him at this trip."

Shishkin ready to fill Altior void after 'phenomenal' progress over the summer 'Angels Breath's as good as any of them, but the road back is long' Epatante camp hope back surgery can help but remain wary of Honeysuckle threat Confidence high in exciting Dusart whether he goes over fences or stays hurdling 'Queen's Flat success is a joy but we must step up and Blue Heaven can help' 'Horses like Jonbon and I Am Maximus keep you going'