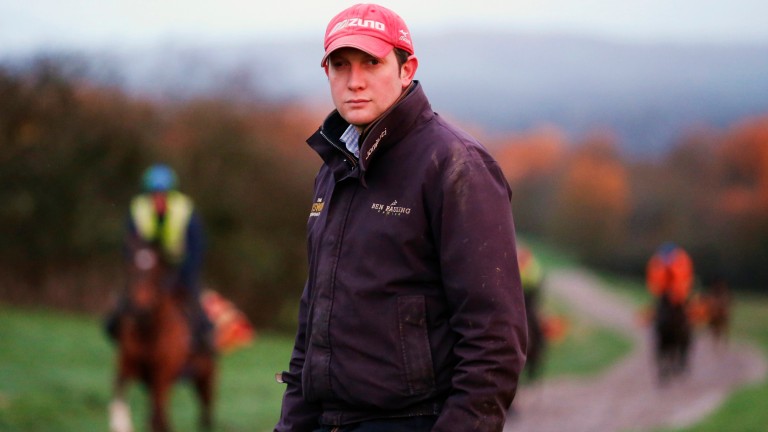 Ben Pauling is relishing a potentially memorable Open meeting at Cheltenham in which he will unleash top novice chase prospect Barters Hill over fences for the first time and fire a triple salvo at the Stanjames.com Greatwood Hurdle.

The ex-Nicky Henderson assistant will pitch A Hare Breath, Leoncavallo and Cyrus Moriviere into Sunday's £100,000 handicap and has also committed the exciting Barters Hill to tomorrow's Steel Plate And Sections Novices' Chase.

Until yesterday, Pauling had abandoned the idea of running Barters Hill, beaten only once in eight starts, at Cheltenham because of the ground, but rain has prompted a change of mind.

"I had drawn a line through it," he said. "I wanted a decent amount of rain, enough to change the going. We got that and they're due a bit more. I'll still walk the course but shouldn't think there'll be any problem.

"It's a big weekend. There are a lot easier starts than this for Barters Hill but he's a classy individual with a big engine. It won't be the easiest introduction to novice chasing but he's well up to the task. He schooled brilliantly today, which was the icing on the cake."

Pauling left his mark on the corresponding meeting last year when A Hare Breath was backed into 6-1 from 25-1 before winning a handicap hurdle on his first start in two years.

The same horse will be back on Sunday to contest the Greatwood off a 17lb higher mark. He is 12-1 with the race sponsor behind 10-1 chance Leoncavallo, who was runner-up to Sceau Royal last time and was well backed yesterday, having been 16-1 in the morning. Cyrus Moriviere is 25-1.

"All three will run," said Pauling, who has had four winners from his last six runners. "I've never had A Hare Breath better. He wasn't quite right at the end of last season so we gave him a long summer off.

"He's done a lot of work and I think he's raring to go. It's quite a big task first time out in the Greatwood but we think he's best fresh and I know he'll do himself justice.

"Leoncavallo was new to me before he ran in October. I didn't know what to expect; he'd come off a Flat season. I think he's inspired by a hurdle and nowhere near as good on the Flat.

"He ran very nicely at Cheltenham last month. We weren't tough on him and he finished very well when Sceau Royal had flown.

"He'll run off a mark 5lb lower than his official mark because he went up when Sceau Royal won again at the weekend and he was standing in his box. I think 5lb is extortionate after we were well beaten. I'm pleased we have our original weight and Alex Ferguson will be able to claim his 7lb, which he wasn't last time."

He added: "Cyrus Moriviere is a very lively outsider. He was improving every run last season. I knew he wasn't ready last time out, he needed it badly. He has come out of the race well and will give a good account of himself."

More Of That received strong support yesterday for Saturday's big race, the BetVictor Gold Cup, as the 7-1 available in the morning disappeared with 9-2 being the best on offer last night.

Trainer Jonjo O'Neill said: "After discussions between owner JP McManus, his racing manager Frank Berry and Sir Anthony McCoy, it has been decided that the intention is to run More Of That at Cheltenham on Saturday. The rain that has fallen has been a major factor in the decision."

Barry Geraghty would be expected to ride More Of That, while Aidan Coleman has been booked for stablemate Taquin Du Seuil.

FIRST PUBLISHED 7:05PM, NOV 9 2016
I wanted a decent amount of rain, enough to change the going. We got that and they're due a bit more