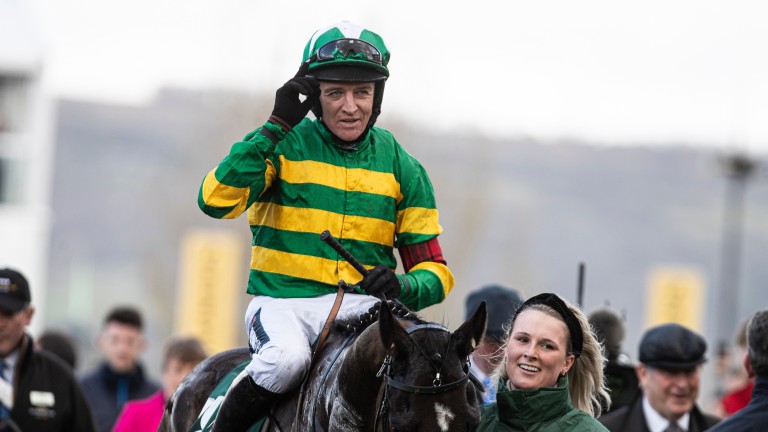 Barry Geraghty returns after the final victory of his career on Saint Roi in the County Hurdle at the Cheltenham Festival in March
Patrick McCann
1 of 1
By Racing Post Staff UPDATED 7:24AM, JUL 12 2020

Barry Geraghty, who has graced jumps racing in Ireland and Britain for more than two decades, has announced his retirement from race-riding at the age of 40.

The rider, whose greatest days in the saddle came on chasing giants Moscow Flyer and Sprinter Sacre, Cheltenham Gold Cup winners Kicking King and Bobs Worth, and the Grand National winner Monty's Pass, made the announcement on Twitter on Saturday night.

"I am happy to say I'm announcing my retirement," Geraghty said. "A big thank you to my family, friends and everyone who has supported me over the last 24 years.

"I've been blessed to have had a wonderful career and I'm looking to what the future holds."

He made a courageous return from a succession of injuries, including a broken tibia and fibula on the eve of last year's Grand National, to ride five winners at the Cheltenham Festival this year, including the Champion Hurdle on Epatante for a record-equalling fourth victory in the race, all on different horses.

A big thank you to my Family Friends and Everyone who has supported me over the last 24 years tonight I am happy to say I am announcing my retirement.... I’ve been blessed to have had a wonderful career and I’m looking to what the future holds....pic.twitter.com/UoD5HKfN3k

This year's festival also provided the stage for one of Geraghty's most dramatic victories when Champ surged home from a seemingly impossible position at the last fence for victory in the RSA Chase, a success which owed much to the rider's determination and strength.

Geraghty's final success at this year's festival, Saint Roi in the County Hurdle, also proved to be the last of his career, his final winning ride in Ireland having come on Charli Parcs at Leopardstown earlier in March.

Geraghty, who was Irish champion jump jockey in 2000 and 2004, is the second most successful rider in Cheltenham Festival history with 43 wins, behind only Ruby Walsh, who retired last year.

More on this story will follow on Sunday morning.

FIRST PUBLISHED 12:41AM, JUL 12 2020
I've been blessed to have had a wonderful career and I'm looking to what the future holds