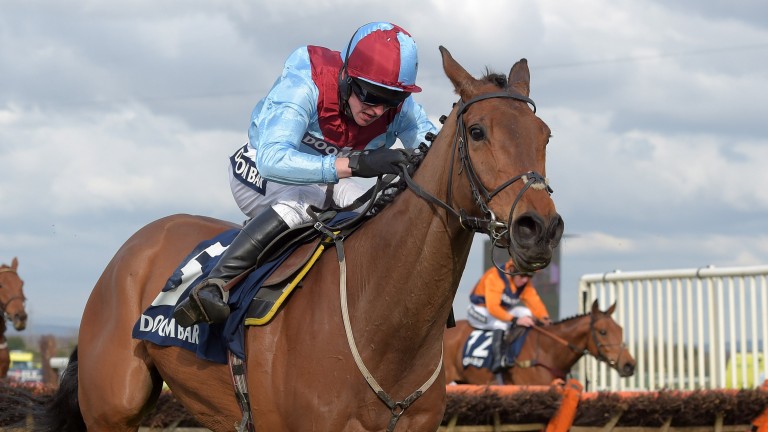 Nigel Twiston-Davies is hoping last season's Aintree Grade 1 novice winner Ballyoptic can gain compensation for a costly slip at Wetherby that was not his fault and confirm himself a serious candidate for the World Hurdle at Cheltenham in March.

The jury is out on whether Ballyoptic would have won Wetherby's West Yorkshire Hurdle but for the mishap, but he would have been thereabouts and had already won a hot handicap at Chepstow, so is clearly in rude health.

Twiston-Davies is understandably optimistic and said: "Ballyoptic jumped the hurdle all right but slipped on landing two strides after it, but it hasn’t dented his confidence as he's schooled well since.

"We think he'd have won that day, but we would wouldn't we? He was going very well though, and the softer ground will help here. I'm very happy with him."

Unowhatimeanharry, now racing for JP McManus, has 10lb to find on Ballyoptic according to official ratings, but he was hugely progressive when going through last season unbeaten and there is no telling what the limit of his ability might be.

The Wetherby race was once pencilled in for his return, but the ground was too quick there. However, it was then too testing for a first run of the season at Haydock last Saturday.

Trainer Harry Fry said: "He was never going to Wetherby on the ground, and then at Haydock last weekend we decided that, because some of mine have been needing their first run, it was the wrong race to start him in, given the testing ground conditions under top weight.

"We decided to come here but at the weights he's got plenty to find. He had a great season last season but he's got to progress again if he's to hold his own in the three-mile division. We'll know where we're going for the rest of the campaign after this, but we're all set and raring to go."

Menorah, who bypassed last Saturday’s Betfair Chase, is a fascinating runner on his first hurdles start in nearly five years. Philip Hobbs points out that on the figures the former Supreme Novices' winner is "entitled to be competitive".

The trainer added: "He didn't go to Haydock because of the ground but he's in very good form and there's nothing to lose. There's no other chase for him until Ascot in three weeks' time, and he could still run there, but he'll be having a winter break before coming back for the end-of-season Sandown chase he's won three times before.”

Gary Moore's Ubak is at double-figure odds but no forlorn hope. Moore said: "It's a tough race, but I've always thought he was up to this grade and there isn't much alternative anyway as he gets a lot of weight in handicaps.

"I was very pleased with him at Aintree and thought he ran a nice race. This track will suit much better and, although I'm not saying he'll win, I do think he has a serious chance. I hope the wind dries it out a bit though."

Snow Falcon's rider Sean Flanagan said: "We're dipping our toes in the water to see how it goes. Three miles is right up his ally and he comes into the race on the back of two good runs, especially last time at Navan where he travelled well and quickened up nicely. He travelled over well and I'm really looking forward to it."