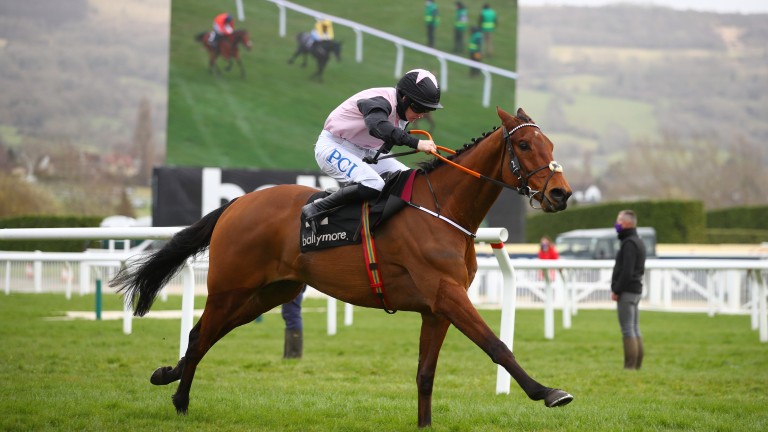 Ballymore winner Bob Olinger has been ruled out of his highly anticipated chase debut at Punchestown today due to a stone bruise.

The six-year-old had an almost unblemished campaign for Henry de Bromhead last season and won the Grade 1 Lawlor's Of Naas Novice Hurdle before striking at Cheltenham under Rachael Blackmore.

He was the long odds-on favourite for the 2m3½f beginners' chase (12.00) that opens the seven-race card at Punchestown. French Dynamite, who also runs in the Robcour colours, is now favourite.

Punters latch on to Minella Encore

Minella Encore has been backed into 9-2 (from 8-1) in the Jewson Tool Hire Amateur Jockeys' Handicap Chase (1.05) at Cheltenham.

He is on a career-high mark after scoring at Fakenham on his first start of the season and will be partnered by amateur Luke Scott.

The nine-year-old, who ran six times for Willie Mullins in Ireland, has won once from five starts over fences for trainer Richard Newland.

Six races are set to be shown live on ITV from Cheltenham and Zanza has been backed into 9-1 (from 11-1 generally) to strike in the feature Paddy Power Gold Cup (2.15) for trainer Philip Hobbs.

The seven-year-old was third in the Haldon Gold Cup at Exeter on his seasonal reappearance and steps up to two and a half miles for the first time under Tom O'Brien, who struck last year on Coole Cody.

The market is headed by Al Dancer, who was 25-1 when the betting opened but has gradually shortened to 6-1 for trainer Sam Thomas. There has also been some support for Midnight Shadow, who has been backed into 9-1, having opened at 12-1 with bet365 today.

ITV Racing tips: one key runner from each of the six races on ITV on Saturday