Ball D'Arc makes it another Sunday special for Gigginstown 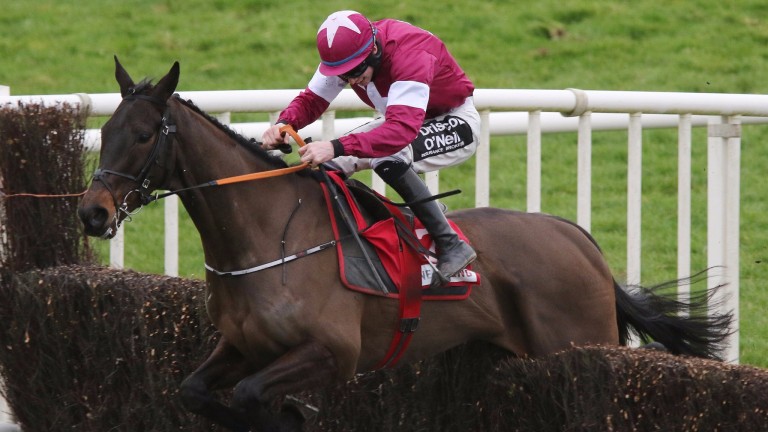 Ball D'Arc and Jack Kennedy jump the last on the way to victory in the Dan Moore Memorial
CAROLINE NORRIS
1 of 1
By Bruce Jackson 12:36PM, JAN 16 2017

Gigginstown, Gordon Elliott and Jack Kennedy struck in the big race on successive Sundays as Ball D'Arc justified favouritism in the Bar One Racing Dan Moore Handicap Chase at Fairyhouse.

A week after combining for Grade 1 hurdle glory with Death Duty the team struck again in this Grade A chase as Kennedy stayed cool when Ttebbob raced into a clear lead of more than 20 lengths passing halfway.

The complexion changed dramatically into the home straight as Kennedy, surviving a pitch on landing three out, drove Ball D'Arc clear to beat Pairofbrowneyes and Draycott Place.

"He didn't miss a beat the whole way, bar the first fence across the bottom. He had plenty in hand. He did it fairly well and should progress from that," said Kennedy. 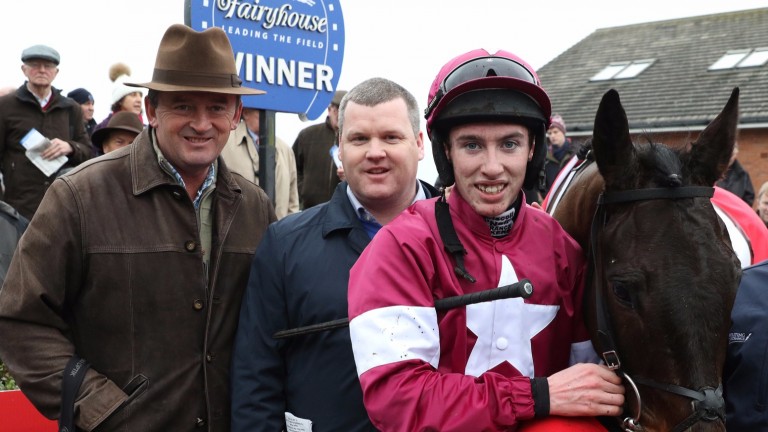 Ball D'Arc with Gigginstown's Eddie O'Leary (left), trainer Gordon Elliott and Jack Kennedy after their big-race success
CAROLINE NORRIS
Elliott, completing a double, stretched his lead over Willie Mullins in their title battle with the €59,000 prize, with the Mullins contender Jarry D'Honneur falling three out.

He said: "These are the one you want to be winning. He was unlucky at Leopardstown but, at the same time, I'm not convinced he would have won.

"The softer ground today suited him well as it allowed him to get into a nice rhythm. This was the obvious race to come after Leopardstown."

He added: "We might look at the Grand Annual, but he's still a novice so the Ryanair Gold Cup, back here at Easter, might be an option too."

Run at a frantic pace

Neil Mulholland's Baltimore Rock was never travelling at the back and Ruby Walsh, replacing the injured Noel Fehily, pulled him up before four out.

The 2m1f Grade A chase was run at a frantic pace as Mister Hotelier and Ttebbob raced clear of the pack and Ttebbob was still clear turning down the side of the course before weakening quickly.

Ball D'Arc was always travelling well towards the head of the pack and only Pairofbrowneyes could go with him off the home bend.

He shook him off after the second-last to forge clear with the race won into the last to stretch Elliott's title lead back to more than €300,000.

FIRST PUBLISHED 3:45PM, JAN 15 2017
He didn't miss a beat the whole way, bar the first fence across the bottom. He had plenty in hand. He did it fairly well and should progress from that