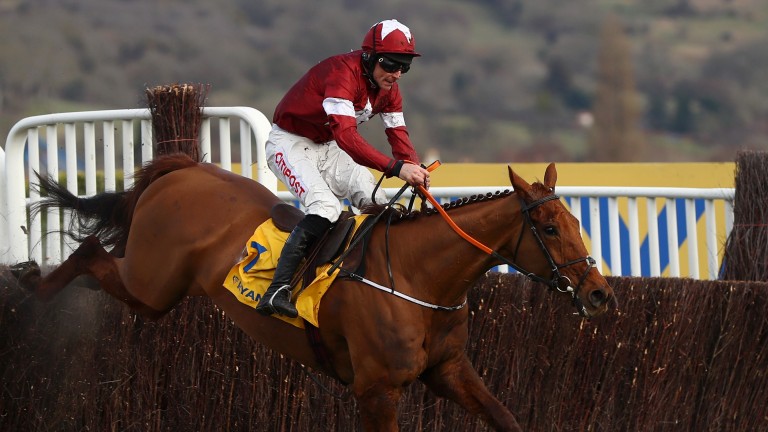 Finally, a smooth landing. There was little or no turbulence during the flight either, as Balko Des Flos provided Ryanair chief Michael O'Leary with a first win in the race he has sponsored since its second running in 2006.

"When you fire enough bullets one of them is bound to hit the target at some stage - we just haven't had enough bullets," said O'Leary, who was celebrating his third winner on the trot following the victories of Shattered Love in the JLT and Delta Work in the Pertemps Final.

"I think I've had a runner every year since we've sponsored and we've had so many seconds and thirds so this is very special. It has cost me a fortune trying to win this race." 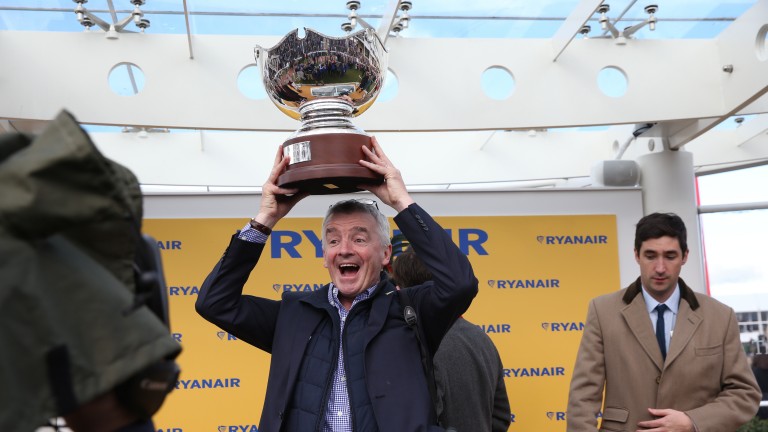 This particular bullet was powerful enough to destroy a surprisingly small Ryanair field, but one which included the defending champion Un De Sceaux and the commendable Cue Card, whose age finally seems to have caught up with him.

Paddy Brennan decided one of the bravest soldiers of the modern era was not enjoying himself so pulled him up before the serious stuff started. It was only fair. Cue Card owes us nothing and we will never even come close to paying him back.

It developed into a duel from some way out as the ever-exuberant Un De Sceaux tried to take his rivals out of their comfort zone, just as he had done in the race 12 months ago. He almost achieved the feat, but Balko Des Flos would not budge.

Davy Russell went in pursuit of the pacesetter coming down the hill and pounced before the home turn. It proved the decisive move.

Un De Sceaux is a champion and fought like one, chasing a lost cause all the way to the line, but last summer's runaway Galway Plate winner has come a long way since his handicap days and was four and a half lengths too good.

It was an utterly dominant display from a rapidly-improving seven-year who is just 6-1 to defend his crown in 2019 with Paddy Power. 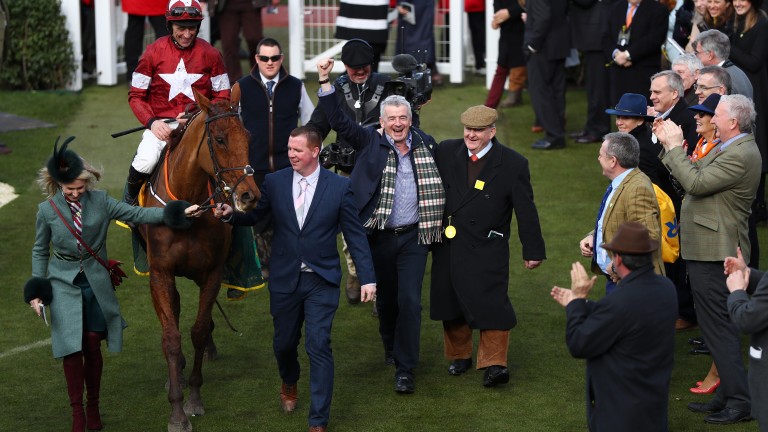 Balko Des Flos ridden by Davy Russell is lead in the the winners enclosure by Michael O'Leary after victory in the Ryanair Chase.
Michael Steele

Some were surprised, but the winning jockey was not among them.

"I'm not surprised, to be honest," he said. "For a normal Cheltenham Festival I'd have fancied Balko Des Flos. On his last run at Leopardstown he showed he could compete at the top level. We thought on nice ground there would be some improvement in him, though I thought his chance had lessened given the rain that fell.

"It wasn't ideal to hit the front that early but the further he went, the more confident he was getting. He's trained by a master and I'm sure he'll do the right thing for him going forward."

That master trainer, Henry de Bromhead, now thinks he might just have a Cheltenham Gold Cup contender on his hands.

"Hopefully next year he might develop into a Gold Cup horse," he said. "To beat Un De Sceaux, who is one of the best around, is fantastic.

"I was hoping he'd run very well but I was a little bit disappointed that the ground wasn't the usual type of Cheltenham ground, which would have been more in our favour than Un De Sceaux's.

"I thought our chances of upsetting him were slipping. But he got such a cool ride. He got into such a lovely rhythm and his jumping was brilliant."

Brilliant indeed, well apart from the last which he crashed through. Un De Sceaux was unable to take advantage, though, and Willie Mullins - who trained Balko Des Flos until his split with Gigginstown in 2016 - admitted the odds-on favourite was simply beaten by a better horse on the day.

"It's always disappointing when you have a beaten favourite here but we've no excuses," said Mullins.