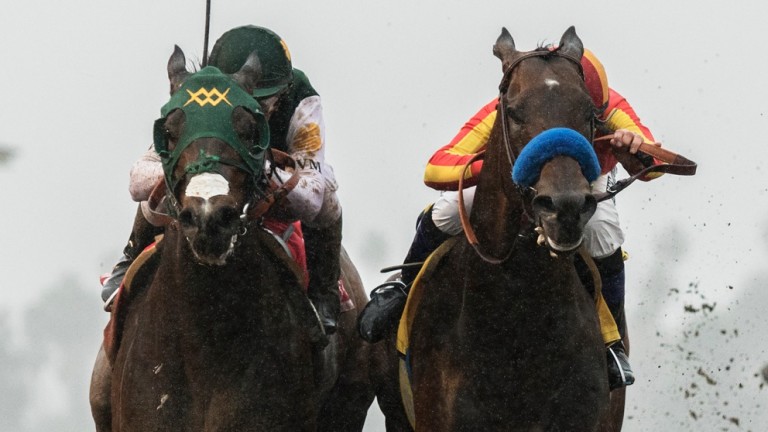 The Kentucky Derby trail caught fire on Saturday with an epic stretch duel followed by a controversial decision from the stewards as leading Classic contenders Bolt D'Oro and McKinzie went head-to-head at Santa Anita.

In a gutsy effort, McKinzie just held off his rival to pass the post first by a head in the San Felipe Stakes – only for Bolt D'Oro (Mick Ruis/Javier Castellano) to be awarded the Grade 2 contest for alleged interference in a fierce battle.

The result was amended only after an 11-minute inquiry – a lifetime in US racing terms – and it looked a harsh verdict indeed, as both horses were equally culpable, as Bolt D'Oro had leaned on his rival at the head of the stretch.

McKinzie's trainer Bob Baffert was left fuming. "That's some bull****," he said. "Javier had a better story I guess. I'm shocked, after the way he hit us at the top of the stretch. I don't know what they're looking at but apparently he talked them into it. That’s why they should never talk to the jockeys, just watch it themselves."

Either way, with Bolt D'Oro six and a half lengths ahead of the third, both principals emerged with reputations enhanced; battle will be rejoined in the Santa Anita Derby on April 7. They are vying for Kentucky Derby favouritism with British bookmakers.

Bolt D'Oro's owner-trainer Mick Ruis expects his son of Medaglia D'Oro to come on for the run. "This was a stepping stone and that's all we needed," he said.

"Hopefully, we’re moving forward and he’ll be at his best in a couple of months. This horse has the heart of a lion. Nine weeks ago he was undergoing a nuclear scan and here we are today. Just being within a nose of Baffert, I’m happy." 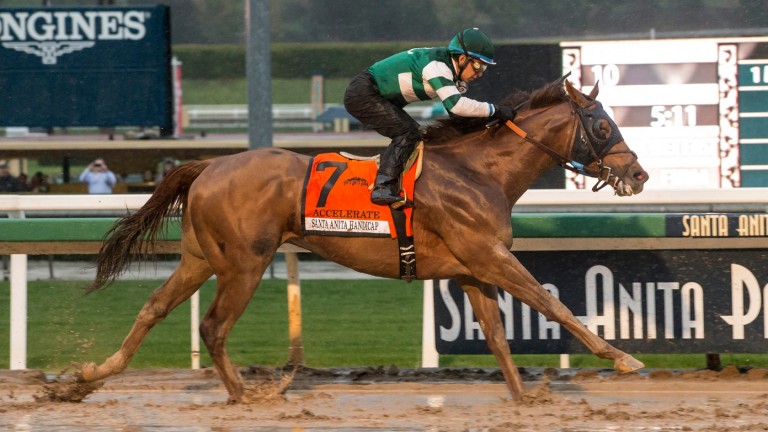 Long since regarded as a Grade 1 performer, Accelerate (John Sadler/Victor Espinoza) finally recorded a Grade 1 victory as he stepped up in trip for the storied Big Cap.

Sitting just off the pace, the five-year-old assumed command turning into the stretch before powering away on a track labelled 'wet-fast' after rain. He beat Mubtaahij by five-and-a-half lengths to claim the $600,000 highlight of a stakes-laden card.

A lacklustre effort from Breeders' Cup Mile hero World Approval signalled the end of his winning streak as Corey Nakatani bided his time on 8-1 shot Bowies Hero (Phil d'Amato), who sat off the pace before striking a furlong out.

A dismal fifth, World Approval – a Royal Ascot target this year – was flat according to trainer Mark Casse, who had nothing to offer beyond an "off-day".

Godolphin's Enticed (Kiaran McLaughlin/Junior Alvarado) got himself back into the Kentucky Derby reckoning with an excellent display in a hot-looking renewal of the Gotham. Despite having the outside gate and being forced four wide down the back straight, he scored by two and three-quarter lengths to erase the memory of a disappointing effort behind leading Classic hope Audible on his seasonal debut at Gulfstream.

Former Bill Mott assistant Rodolphe Brisset, who set out on his own less than 12 months ago, landed his biggest success to date as 19-1 outsider Quip (Florent Geroux) held the late charge of Flameaway by a length to claim this $400,000 contest. The Kentucky Derby beckons.

Street Sense won this before winning in Kentucky in 2007, while Super Saver was third in Tampa before claiming America's greatest race three years later.