Baffert: I feel confident about West Coast laying down the law in World Cup 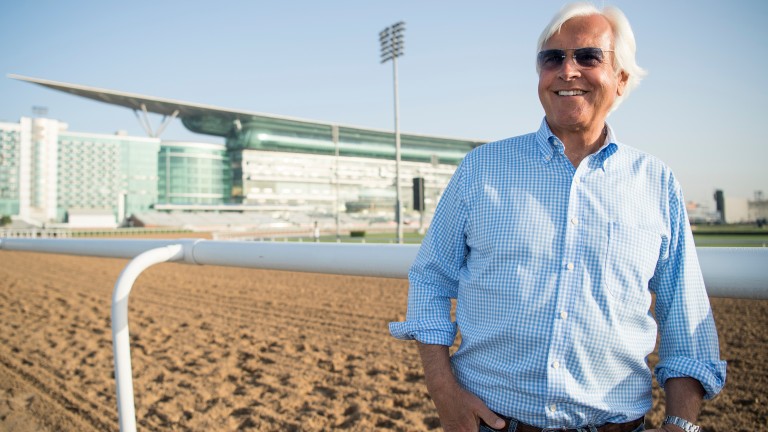 There may have been no sign of West Coast on the track at Meydan on Tuesday morning but that did not stop three-time Dubai World Cup-winning trainer Bob Baffert talking up the chances of his leading hope for Saturday's $10,000,000 spectacular.

A bout of jet lag kicked in at 3.30am for the trainer of 2015 Triple Crown winner American Pharoah, so much so that he was up in bed and watching breeze-ups from Fasig-Tipton Gulfstream sale.

Although it was a light schedule limited to walking in the stable area for his World Cup contenders, Baffert was up and at em' on course and issued positive vibes about West Coast, the mount of Javier Castellano, who is 5-6 favourite with Sky Bet and Coral.

Baffert said: "He's held his form since the Pegasus and worked really well before we came over here. He looks happy, strong and healthy.

"This is West Coast's chance to do what all those top horses have achieved – he's the best older horse in the US right now and he's getting better and better. He's pretty exciting and the raw talent is there. I don't want to jinx myself, but I feel confident."

Success in the highlight race on the world's richest raceday takes a trainer's reputation to the next level. Baffert, 65, knows just that and has the experience to handle the occasion, but does he feel the pressure?

He said: "There's always pressure in these big races – if he was 40-1 or 50-1 then you don't feel any pressure and you're just glad to be here – but when you feel you can win the race there is added pressure. If there's expectations then that means we've got him in the right spot."

While Pegasus World Cup runner-up West Coast brings a certain reputation, it is incomparable to that of former stablemate Arrogate, who confirmed himself the best in the world for a second year running with a dramatic last-to-first victory in the race last campaign.

Baffert said: "It was the greatest performance you will ever see, although it was no fun watching it. It was horrible. I was so mad that I couldn't even enjoy the win. It took me a while to cool off – I couldn't believe what I had seen. It was a race for the ages and it left a mark.

"People turn up to see the elite athletes and Arrogate was one of those. Golf fans go to see Tiger Woods and horseracing fans were drawn to the track by Arrogate – he was a real winner."

Baffert pinpointed the Andre Fabre-trained Talismanic as a main danger to the Gary and Mary West-owned West Coast and also runs Meydan regular and general 20-1 shot Mubtaahij, partnered by Victor Espinoza, successful in the race aboard California Chrome two years ago.

The Californian-based trainer said: "Mubtaahij is a picture of health and likes it over here. He loves this track and you need that.

"He's competitive wherever he goes – he's a professional and really straightforward."

Champion US mare Forever Unbridled is a steady second favourite at a general 8-1 on what will be her final start before retiring to stud.

Her trainer Dallas Stewart, enthused by her workout at the track on Tuesday, said of Mike Smith's mount: "She was awesome this morning – we stretched her out a little bit and she loved it as she loves to train.

“Mike likes her, he’s been watching her and has been wanting to ride her for some time now. There’s no need to give him any instructions on Saturday. He’s really pumped up and he'll have his head in the game. His style will suit her well and he knows this track.”

Big Orange, 7-1 third favourite for the Dubai Gold Cup, did not exercise on the track on Tuesday and was instead led around the quarantine barn after suffering a bout of setfast following a canter on the training track on Monday.

Connections with runners in the Dubai World Cup, as well as the other five Group 1 races on Saturday's card, will find out their fate regarding the draw at 8.30GMT on Wednesday morning.

Ertijaal, a general 8-1 shot for the Al Quoz Sprint, will miss the race after suffering a stress fracture, while the Ali Rashid Al Rayhi-trained stablemate Muaarab will not contest the Golden Shaheen after being found to be lame.

Jim Crowley will now ride the David Hayes-trained Faatinah in the Al Quoz Sprint, replacing Dane O'Neill in the saddle.

FIRST PUBLISHED 3:05PM, MAR 27 2018
If there's expectations then that means we've got him in the right spot