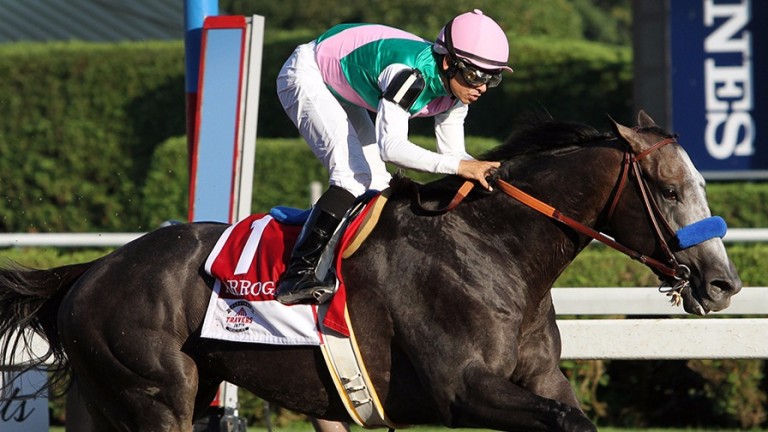 The question for those who fancy Arrogate's Classic chances is quite straightforward – can he reproduce his explosive all-the-way Travers Stakes victory or was it a freakish one-off display?

Jockey Mike Smith is optimistic. "He's been training unbelievably," said Smith, the most successful rider in Breeders' Cup history. "He'll need to repeat the race he ran in the Travers to beat California Chrome and the others, but he's got the talent."

Owned by Khalid Abdullah's Juddmonte operation, the lightly raced Arrogate shot to the head of the US three-year-old rankings with that gigantic Saratoga effort, running right away to score by 13 and a half lengths in track-record time.

"I think he can do it again," said trainer Bob Baffert.

"We don't know how good Arrogate is," added the Californian-based legend, seeking a Classic hat-trick after Bayern and American Pharoah. "The only time we set him down was in the Travers. I haven't seen anything to tell me he can't do it again. This is the best he's ever been."

Baffert has the utmost respect for California Chrome, however, adding: "I don't know if we can beat him, but I think we have a horse who can be competitive with him."

Arrogate breaks from the outside post in a ten-runner field. "A lot will depend on the break but it's a long run to the turn and it'll get sorted out," said Baffert. "At least we're not in the number one, where if they don't break someone will shut them off."

Stablemate Hoppertunity, who won the Jockey Club Gold Cup at Belmont last month, breaks from next door in gate nine, and Baffert added: "He runs so much better away from California. He likes a deeper, softer racetrack, but right now he couldn't be doing any better. He's coming into this race better than he ever has."

Pros Looked a monster with wide-margin track-record victory in the Travers at Saratoga, which produced a huge Beyer speed figure; trained locally at Santa Anita by Bob Baffert.

Cons Got the perfect trip as he flew in under the radar in the Travers – can he repeat that dazzling performance here where he is bound to face more pressure on the front end?