Talk of the Tracks KELSO 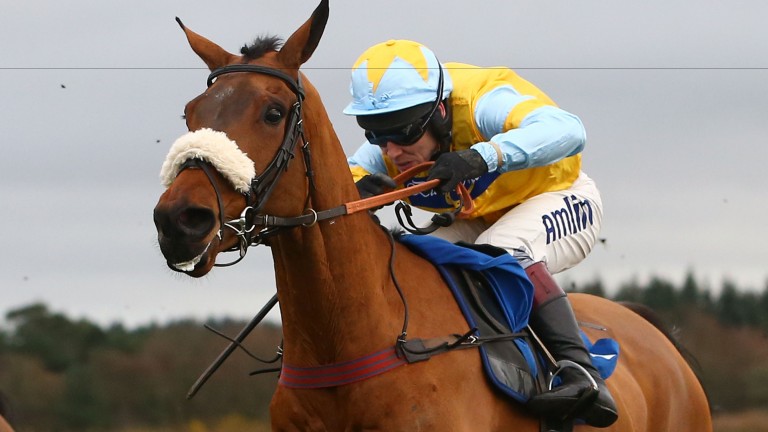 IMJOEKING, diverted from a crack at a valuable prize at the home of the Grand National, secured a handsome consolation prize in the Scottish Borders.

The nine-year-old put up an exhibition round of jumping to brush aside seven rivals in the £12,000 featured 2m1f handicap chase.

Making all, Imjoeking stayed on strongly on the long run to line to come home six lengths clear of Quick Decisson.

“We considered going for a more valuable race at Aintree but I'm always delighted to have a winner at Kelso,” said trainer Lucinda Russell.

“He’s jumped well today and if anything we were inconvenienced by the last fence being missed out.”

Russell‘s stable has been in the doldrums but fortunes are looking up with three winners at Hexham on Friday to go with this latest success.

“I can’t really put my finger on why things have suddenly improved,” said Russell. “You just work harder at home when it's not going well and we've changed one or two things.”

Winning jockey Derek Fox had earlier been given a seven-day ban for using his whip above the permitted level aboard the stable's Misfits in the novice handicap chase.

Jefferson does the trick
Malcolm Jefferson is another trainer to have struck a rich vein of form and he was on the mark with Trickaway in the 2m5½f handicap chase.

The eight-year-old stayed on well under Brian Hughes for a three-and-a-half-length victory over Shimla Dawn.

Some had questioned the attitude of Trickaway, who joined Jefferson in September after previously being with Philip Hobbs.

Jefferson said: “I’ve been given all sorts of instructions about how this horse should be ridden but I just try to get them fit and on the course.

“Everyone tells me he’s a quick horse but Brian thought he should go up to three miles and that’s probably what we’ll do now.“

Jumping fits the Bill
Another Bill put up a much-improved round of jumping and underlined his potential with a ten-length success in the 2m6½f novice hurdle.

The 5-6 favourite made light of 14lb of penalties as he stretched away after the last to take care of long-time leader Tree Of Liberty.

“He’s had plenty of practice and jumps much better now. He’s done well to give so much weight away to an unexposed horse,” said trainer Nicky Richards.

He added: “We’ll wait to see what the handicapper does before deciding whether to go down the handicap route with him.”

Trainer George Bewley has his 20-strong string in good shape and he was on the mark when Casual Cavalier narrowly prevailed in the novice handicap chase.

“He hasn’t run for some time as he wasn't right,” said Bewley. “He’s bone idle and Brian [Hughes] said we should get the blinkers on him.“

Thought for the day
The system of following in-form trainers paid handsome dividends as Malcolm Jefferson, Lucinda Russell and George Bewley were all on the mark.