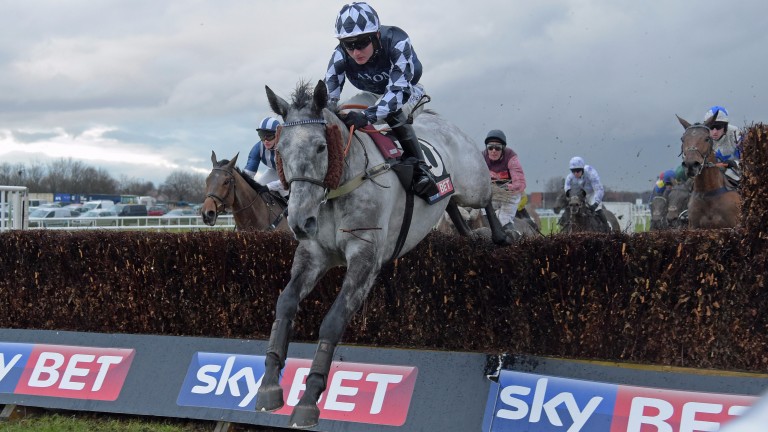 The fact that Tom Bellamy and Ziga Boy emerged from the Sky Bet Chase the only ones unstained by the Doncaster mud was a perfect metaphor for what had just taken place.

The pair had made virtually all in a fiercely competitive handicap, jumping fluently and galloping resolutely as his rivals dropped off one by one.

For Ziga Boy, it was for the second year in a row and he became the first dual winner of this race in its near 70-year history. Not for Bellamy, however, who rode like a man wronged. In a sense, he had been.

"I was too fat to ride him last year!" he laughed afterwards, referring to the fact that the 2016 renewal was the only time in the horse's last eight runs that he has not been aboard. "He's up in the handicap now so I could make the weights and it’s all worked out in the end."

He played down the significance of his daring ride, preferring to imply that the gods had thrown him a bone.

"It was always the plan to make the running with him, but the rain might have helped him. I spoke to Brendan [Powell], who rode him last year, and we thought that though he doesn't need soft ground, the rain beforehand may just help slow the others down and make it easier for him to do what he did. It sounds a bit mad, but it seemed to have worked out there."

The only real threat to Ziga Boy up the straight was Looking Well, whose charge never looked likely to pay off on this occasion but promised plenty for another.

"To say I'm pleased would be an understatement," said trainer Nicky Richards. "He's stayed on really strongly and as a chaser he's still a young horse. We might look at the 3m handicap at Cheltenham or the Scottish National – he'll get 4m on that evidence and next year we might be thinking about the big one at Aintree."

Ziga Boy, on the other hand, has served his time waiting for the Grand National, as trainer Alan King intimated at Cheltenham. "He'll get further and we've always thought about the National for him one day," echoed Bellamy. "Now he's up in the weights it might be this year."

FIRST PUBLISHED 4:25PM, JAN 28 2017
It was always the plan to make the running with him, but the rain might have helped him