News BACK IN BUSINESS 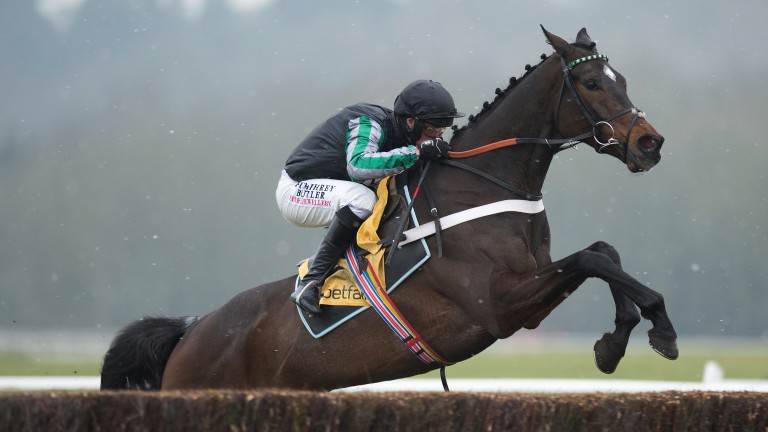 Altior puts in a flying leap on his way to victory at Newbury
Edward Whitaker (racingpost.com/photos)
1 of 1
By Jon Lees UPDATED 3:25PM, FEB 5 2018

The ten-month wait for the next glimpse of the outstanding Altior on a racecourse is near its end after he was entered to run at Newbury on Saturday.

Last year's Racing Post Arkle winner, who is unbeaten in 11 starts over jumps, had his seasonal return delayed because of a breathing issue in November.

But after minor surgery interrupted his training schedule, trainer Nicky Henderson declared on Monday that Altior was ready to run again on Betfair Super Saturday provided the ground does not deteriorate.

"Altior has been given an entry for @NewburyRacing on Saturday and the intention is very much to run," he said on Twitter.

"His work has been good and we’re very happy. We’ll keep an eye on the weather but if it stays good to soft/soft, he’ll be declared."

Altior has not raced since April, when he beat Queen Mother Champion Chase winner Special Tiara in the Celebration Chase at Sandown.

He was due to return to Sandown to begin his senior campaign in the Tingle Creek Chase only for plans to be scrapped when Henderson revealed the horse had made "a whistling noise" during work. Vets subsequently diagnosed a wind issue with a scope showing his larynx was not opening fully for which the horse underwent a minor procedure.

Altior was among seven entries in the Grade 2 Betfair Exchange Chase, otherwise known as the Game Spirit and the race he won 12 months ago as a novice. His likely opponents, who are set to include Tingle Creek winner Politologue, will not be known for 24 hours after the race was reopened. 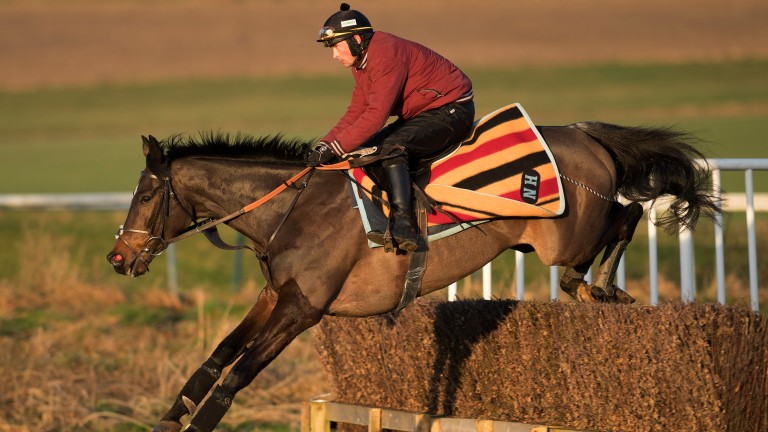 Altior: chaser takes a fence in his stride on the schooling grounds
Edward Whitaker / racingpost.com/photos
Henderson said his announcement on Altior was not quite a green light to run but a declaration of intent provided conditions at Newbury do not worsen from good to soft or soft. It would be his only start before the Betway Queen Mother Champion Chase, for which he is 6-5 favourite.

"We are on amber waiting for it to go red or green," he said on Monday. "The ground will dictate it. Wind is amplified by very soft ground. I have no worries about his wind whatsoever but there is no point putting it under a severe test.

"We don't need to, but if it was nice enough ground he would run. He has a bit of work to do tomorrow and that would be that. The ground is soft/good to soft which would be fine. He is very, very well."

Despite including Altior among a Newbury team that includes five in the Betfair Hurdle [Verdana Blue, Charli Parcs, Jenkins, Kayf Grace, Lough Derg Spirit] there was no place for Might Bite in the Betfair Denman Chase, which was also reopened. The King George winner will head straight to the Timico Cheltenham Gold Cup.

"I didn't seriously consider running Might Bite," Henderson said. "I would have had to have started with him a fortnight ago and I never did. He is in great order. He is good fresh."

He added: "All five are still in the Betfair Hurdle and all five intended runners."

The going at Newbury was soft, good to soft in places, on Monday when the whole course was being put under protective covers.

Clerk of the course Richard Osgood said: "We are covering today. They are talking about some frosts coming mainly tomorrow, Wednesday and Thursday morning. Thursday into Friday there may not be even a frost and Friday into Saturday there may be a light frost hitting -1C at the worst. I have covered because you have to be careful with frosts.

"I am happier today than I was before the weekend. The forecast has changed for the better."

Supreme Novices' Hurdle, Cheltenham, March 2016
Taking up the lead after the second-last, Altior charged up the hill in the manner of a top-class horse to win by seven lengths, lowering the colours of the Rich Ricci-owned hotpot Min. 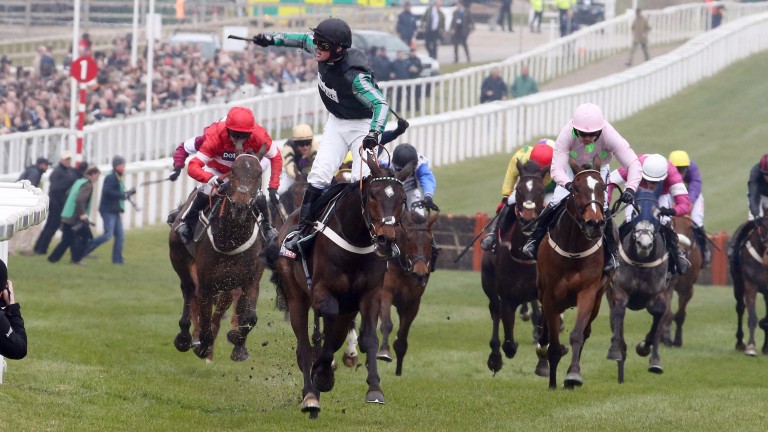 Betfair Exchange Chase, Newbury, February 2017
In a performance that belied his lack of experience over fences, Altior sauntered home ahead of the likes of Fox Norton and Dodging Bullets to earn comparisons with the brilliant Sprinter Sacre, who also won this race en route to Arkle victory.

Celebration Chase, Sandown, April 2017
His second foray out of novice company and pitted against the Champion Chase winner Special Tiara, this was arguably Altior's biggest test yet. However, he slammed Henry de Bromhead's star by eight lengths.
Kitty Trice

FIRST PUBLISHED 12:11PM, FEB 5 2018
We are on amber waiting for it to go red or green. The ground will dictate it. He is very well