Back in action: William Buick cleared to return at Newmarket on Friday evening 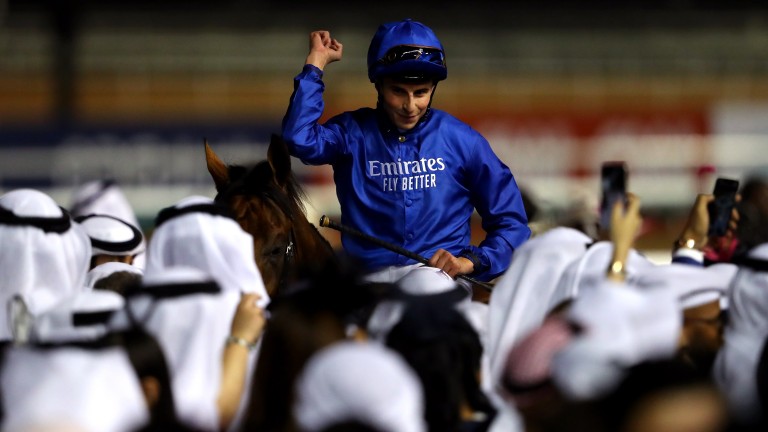 William Buick has been cleared by the BHA to return to raceriding on Friday after nearly 12 weeks out of action since a fall at Ascot in May.

"I ticked the last box this morning," said a relieved Buick on Thursday. "I have been given the all-clear to get back and I feel good.

"It has obviously been frustrating but everyone has been very supportive. My family, Sheikh Mohammed and Charlie [Appleby] have been incredibly supportive."

Appleby's stable jockey has been out of action since May with post head-injury syndrome sustained after a fall on the way to the start at Ascot. The symptoms did not develop for more than 24 hours as Buick completed a full book of rides the next day and rode a winner.

Buick added: "I fell off on the way to the start at Ascot and hit my head. I had a late reaction to that, what you would call delayed concussion."

Asked about his fitness, Buick added: "I feel I have done as much as I can do and have been riding out for a while now. I have had plenty of time to prepare and get ready, and it will be nice to get back and going again.

"I have missed a very important part of the season but there is still a hell of a lot of the season left with plenty of important meetings and races, and I am refocusing on that with a lot of nice two-year-olds to come out."

Buick, 31, enjoyed a spectacular winter in Dubai thanks to the likes of Blue Point in the Al Quoz Sprint, Cross Counter in the Dubai Gold Cup and Old Persian in the Sheema Classic, but had ridden just 13 winners in Britain this year.

Members can read the latest exclusive interviews, news analysis and comment available from 6pm daily on racingpost.com via https://www.racingpost.com/members-club/

Buick and Balding earn leading jockey and trainer titles after glorious week Suesa's connections mull over Nunthorpe bid with Abbaye ultimate goal Brilliant Baaeed strolls to fourth victory to leave Haggas aiming at the top Charlie Appleby outlines plans for top three-year-olds Adayar and Hurricane Lane Forgive the gushing enthusiasm but I feel like I have seen something special Are we looking at a Group 1 horse in a handicap? International Stakes insight