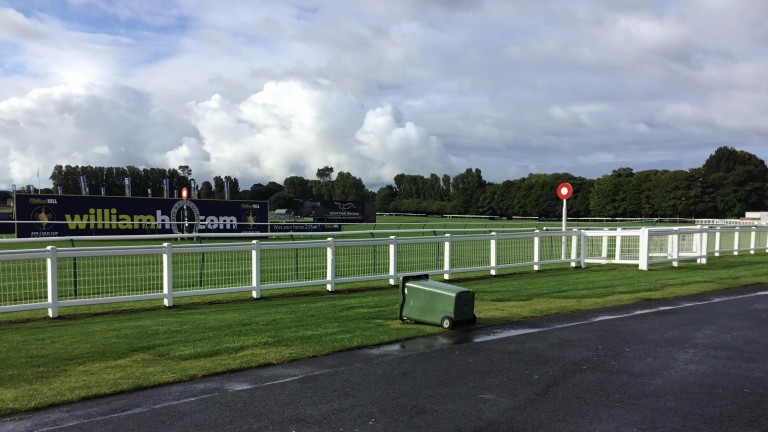 Ayr's Western meeting was dealt a hammer blow on Thursday evening when the decision was taken at 7.07pm to cancel Friday's card due to waterlogging.

The three-day meeting did not start as planned on Thursday as heavy rain left a patch of ground in the home straight unraceable and the card was called off.

An inspection had been planned for Friday morning prior to the afternoon's racing, but following a check on Thursday evening, the area of unraceable ground had not improved sufficiently.

Ayr's head of public relations Iain Ferguson said: "Chris Dennis, the inspector of courses, has been on the track and it is not going to make it for tomorrow.

"So we will inspect tomorrow for Saturday. PJ McDonald is driving up and he will be out on the track with the clerk of the course Graeme Anderson."

The inspection for Saturday's card, which features the £200,000 highlight, the William Hill Ayr Gold Cup, will be at noon on Friday.

The decision to cancel the card late on Thursday was a blow to many, including John Gallagher, who had made the seven-hour journey up from his base in Gloucestershire in preparation for running Quench Dolly in the Listed fillies' race on Friday.

But shortly after arriving at the track, his trip proved to be in vain, leaving the trainer disappointed that officials had not waited until Friday morning to make the call.

"It's bloody annoying," he said. "In my eyes it would have been much better had they waited until tomorrow morning, as at least you would have felt they'd waited overnight to give it more of a chance, but what can you do."

A major Gold Cup gamble developed on Ice Age following Thursday's draw, after connections opted to go close to the middle of the 25-runner field in stall 11, with low draws proving popular.

Having been as big as 16-1 before the draw, Ice Age, Eve Johnson Houghton's hope and the mount of Edward Greatrex, was on Thursday evening a general 10-1 chance behind 8-1 favourite Shanghai Glory.

"He loves soft ground; we'll see if I've drawn right," Johnson Houghton said on Thursday. "He doesn't need to follow anything, he can make his own pace."

Ice Age's winning streak began with a pair of Windsor victories last month before he went to the Curragh and claimed a valuable handicap.

"He's in great form and is rapidly improving, so we're hopeful," said the in-form trainer, enjoying her best season with 44 wins. "It's a big ask but he deserves to be there."

In the draw stalls towards the far side of the course were overwhelmingly popular. Trainers of 12 of the first 13 horses out of the drum chose low numbers, with David O'Meara's Edward Lewis (stall 18) the one exception.

Tim Easterby, whose Golden Apollo was the first selected and will break from stall six, said: "I was on the track this morning and I took the opinion that's where I wanted to go after walking the track.

"When the ground is good to soft down to good you want to be where the pace is and there has maybe not been a massive draw bias, but when it comes heavy it's a different world."

Richard Fahey chose low numbers for the first two of his eight runners but was forced to go high with the remainder. Paul Hanagan has switched from Toscanini to Stamp Hill and the sponsors have reacted by cutting his new mount to 14-1 (from 16) while pushing out Toscanini to 14-1 (from 12).

Both horses are trained by Fahey, who said: "I was very sweet on Toscanini but heavy ground will be a little bit of a worry.

"Paul won the Tote International on Stamp Hill and it's hard to get off a horse who does that – he's a progressive horse and he's probably the only one for me [with a bit of improvement].

"If it was seven furlongs I think he'd be favourite and win."

FIRST PUBLISHED 7:37PM, SEP 21 2017
Chris Dennis, the inspector of courses, has been on the track and it is not going to make it for tomorrow