Awesome Altior looks in different league to his rivals 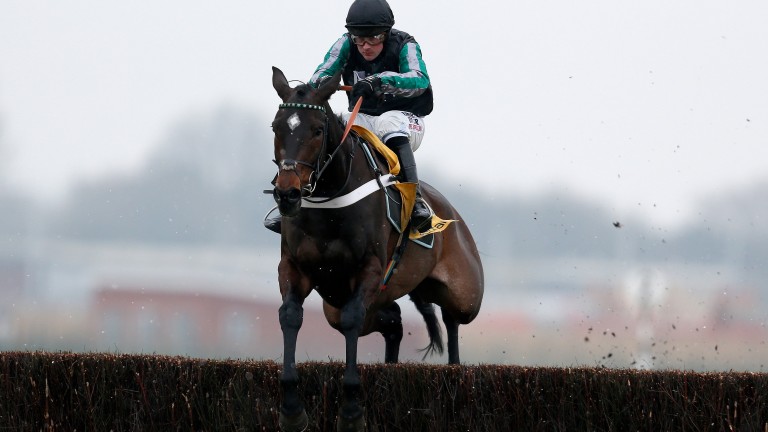 Altior: has been sensational in his preparation for today's test
Alan Crowhurst
1 of 1
By Stuart Riley 6:00PM, MAR 13 2017

Altior kicked off the 2016 Cheltenham Festival with a breathtaking performance in the Supreme Novices' and everything he has done since has led to the expectation this year's display of dominance will be even more emphatic.

Nicky Henderson's star comes into the race with a higher rating than the wondrous Sprinter Sacre brought in 2012 - thanks to a 13-length thumping he handed out to clear Champion Chase second favourite Fox Norton in last month's Game Spirit at Newbury while in receipt of just 5lb.

That was the same race in which his illustrious stablemate had his final preparation for this contest and it is not the only comparison that can be made between the two, with Henderson on record as stating this could be the horse to fill the void in the yard left by Sprinter Sacre's retirement.

The fact that plenty of judges, Sam Twiston-Davies and Noel Fehily among them, were prepared to side with the seven-year-old had he taken on Douvan in the Champion Chase is a reflection of just how far clear he is of his rivals today and barring a fall the rest look to be fighting for second place.

Let the market be your guide

Just once in the last ten years has the winner come from outside the first four in the betting, and that was 33-1 shot Western Warhorse in 2014. There have been four winning favourites, two second favourites and two third favourites in that time. There have been just five horses priced bigger than 14-1 who have hit the frame in that time and Charbel, Royal Caviar and Cloudy Dream are the next three in the betting.

Henry de Bromhead saddles a third of the field with three runners and that is as many as he has had in this race in the last ten years. He knows his way around a good two-miler and has had an Arkle winner and a second, so his battalion should be respected.

Ben Pauling, trainer of A Hare Breath
Most of the field is realistically hoping to finish second. A fast-run, two-mile chase around Cheltenham will suit him down to the ground. He goes well at the track, is ever so well at home and if he got in the places, we'd be thrilled.

Nicky Henderson, trainer of Altior
Everything has gone right in his preparation and now he's got to go and do it again on the track. He's had a similar preparation to Sprinter, albeit in different races until we ended up in the Game Spirit and he was impressive there - just as Sprinter was. He's been very good and I don't know what more to say. Cheltenham is a big test of jumping, but he had a good test around Sandown in the Henry VIII. We don't have to make the running, but he's a forward going sort of horse and won't mind it if he has to, although I wouldn't be surprised if Charbel gave him a lead, as he did at Sandown. It's not imperative either way.

Kim Bailey, trainer of Charbel
I'm very happy with him and he's had a break because he wasn't right after his last run. He goes there in good nick and he's never been further than two miles so it's difficult to go further when you haven't done it.

Malcolm Jefferson, trainer of Cloudy Dream
I don't suppose anything's going to beat Altior, but he's in good order. I'd like to think he can be in the first three. He always comes to himself at this time of year, he's a better horse in the spring, so we're very happy with him and if all goes well he should run a good race.

Brian Ellison, trainer of Forest Bihan
I'm really happy with him and he's working well. The ground's perfect, the track will suit him and he's got a brilliant turn of foot. We're very hopeful of a big run.

Henry de Bromhead, trainer of Ordinary World, Some Plan and Three Stars
Ordinary World is a very slick jumper and the more the ground dries out the better his chance will be. There probably isn't a lot between the three of them and Altior is going to be very difficult to beat. Some Plan finished alone in the Arkle at Leopardstown but he's three from four over fences and was in the lead when he fell two out at the November meeting here. Three Stars has plenty of experience but is rated a few pounds lower than the other two.

Point of fact
Nicky Henderson’s last seven favourites in Grade 1 novice races have finished 1112111. He is going for a record-breaking sixth Racing Post Arkle win and success for Altior would give him one more in the race than Tom Dreaper. Remittance Man (1991), Travado (1993), Tiutchev (2000), Sprinter Sacre (2012) and Simonsig (2013) are his winners so far.