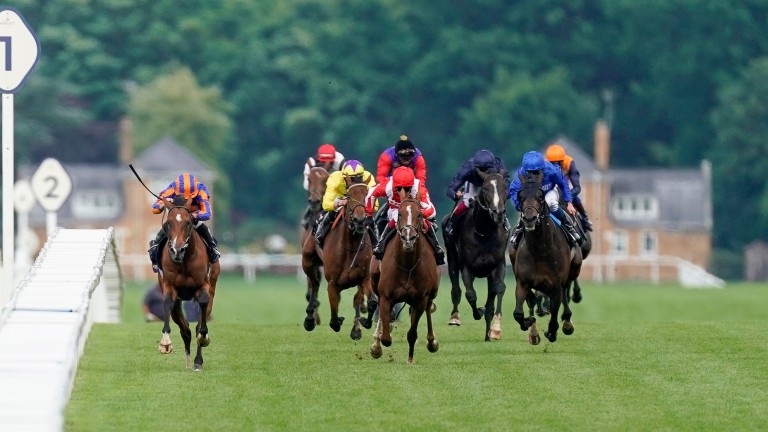 Aidan O'Brien has won the Irish Derby 13 times – six of those have arrived since 2010 – but not since Australia justified his skimpy starting price of 1-8 in 2014 has he won it with what everybody believed to be his first string.

Capri was sent off at 6-1 in 2017 when Ryan Moore opted to ride Epsom hero Wings Of Eagles, and we all know what happened 12 months ago when Padraig Beggy stole a march on 33-1 rag Sovereign with those in behind barely seeing which way he went.

So just because Seamie Heffernan is on Santiago does not necessarily mean he is the chosen one for Ballydoyle.

In saying that, Santiago's sailing in the Queen's Vase at Royal Ascot could hardly have been smoother. He settled beautifully in the hands of Moore and, when the race was there to be won, he quickly put it to bed.

You could even argue he beat Berkshire Rocco every bit as easily as English King did at Lingfield, and Ed Walker's most prized possession is a shorter price for Epsom glory than Santiago is here at the Curragh. 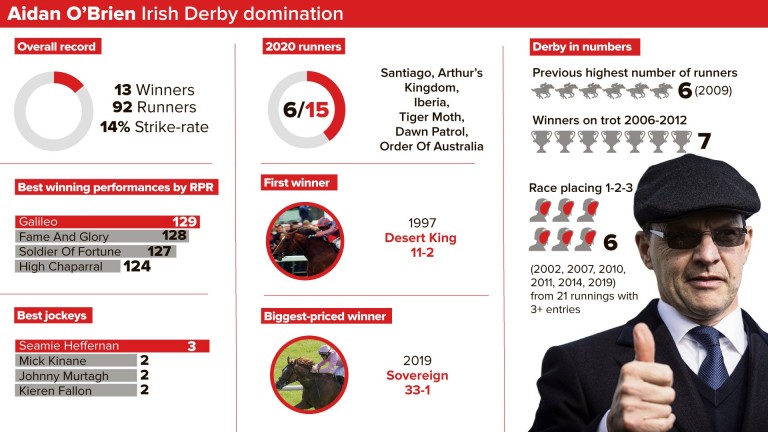 Arthur's Kingdom went into the King Edward VII Stakes as something of a forgotten horse. All eyes were on stablemate Mogul, but there was plenty to like about the way Frankie Dettori's mount performed and he was only two lengths off winner Pyledriver at the line. He's tough and what he lacks in class he appears to make up for in attitude.

Tiger Moth led home Dawn Patrol and Order Of Australia in a Leopardstown maiden last time and there was nothing we saw there to suggest they will not finish in the same order here, but are any of them good enough? That is the big question.

Iberia is rated 106, but he was well beaten by Cormorant in the Derrinstown Stud Derby Trial so needs to step up considerably on that to feature here.

Joseph O'Brien, successful with Latrobe in 2018, is triple-handed and the unbeaten Crossfirehurricane leads his team into battle. He is four from four and the way in which he won the Gallinule screamed that he was a star.

This longer trip and better opposition will test the Kitten's Joy colt, but who knows how good he actually is? He could well be the real deal.

Seldom have so many maidens had such strong credentials in the Irish Derby. Fiscal Rules was a fine fifth on his second start in the Irish 2,000 Guineas behind Siskin, while Chiricahua was runner-up in a pair of hot maidens. Neither could be written off with confidence.

Donnacha O'Brien has a chance too with Sherpa. He has a length and three-quarters to make up on Crossfirehurricane from their Gallinule showdown, but this stiffer test of stamina looks sure to bring them closer together.

There are avenues to be explored everywhere you look, but it all comes back to Santiago. You sense if he is in the same sort of form as he was at Ascot then he is the one they all have to beat.

Donnacha O'Brien went mightily close with his first Classic runner Fancy Blue finishing fast to chase home Peaceful in the Irish 1,000 Guineas a fortnight ago, and he might pose the biggest threat to his father's quest for a 14th Irish Derby with the exciting Sherpa.

Aidan better start getting used to his sons trying to spoil his fun and Donnacha has already made a smooth transition from jockey to trainer.

Sherpa was a Roscommon maiden winner on his final start for Aidan last season and the way he stormed home for third in the Gallinule, over 1m2f on what was his first official start for Donnacha, suggests the Derby trip will be right up his street.

His revised rating of 102 leaves him with 9lb to find with Santiago, but his trainer thinks there is more to come from Sherpa now that he steps up to a more suitable trip.

O'Brien said: "He's in good form and we think that 12 furlongs will definitely suit him. Any rain that arrives at the Curragh will suit him as well. You'd have to be very pleased with the way he hit the line in the Gallinule and he seems to have been in good form since."

Asked what it would mean to him to win the Irish Derby only a couple of months into his new job, the 21-year-old laughed before replying: "It wouldn't be a bad start, would it?"

It certainly would not, and Sherpa would appear to have a decent chance of helping him achieve the feat.

Aidan O'Brien, trainer of Arthur's Kingdom, Dawn Patrol, Iberia, Order Of Australia, Santiago and Tiger Moth
Santiago obviously hasn't done much since Ascot, but we're happy. He settled lovely and travelled through the race nicely at Ascot. He's done that from day one. He always travels well in his races. He went through the race at Ascot like a real middle-distance horse. We know he gets 1m6f now and we're just hoping he has enough class for 1m4f. Everything seems fine with him, but the quick turnaround from Ascot is an obvious worry. Arthur's Kingdom is a very straightfoward, honest, horse. We know he gets a mile and a half very well after Ascot. Iberia is similar in that he is very honest. He likes nice ground. Dawn Patrol came out of his maiden very well and, although he is still a maiden, we think the trip will suit and he's gone the right way since Leopardstown. Tiger Moth won that maiden at Leopardstown and he's a nice relaxed colt who will handle the ground. Order Of Australia was just behind the two of them in that Leopardstown maiden and he's done very well since then. We're putting the blinkers on him because he is very laid-back.

Joseph O'Brien, trainer of Crossfirehurricane, New York Girl and Galileo Chrome
We'd be hoping the rain will stay away for Crossfirehurricane. He has been in good shape since his win in the Gallinule and has earned his crack at the race. He's done nothing wrong his whole career and has the pedigree to be a good horse. He's taken every challenge we have put to him and we're looking forward to seeing how he gets on. It might be a big ask for Galileo Chrome given how inexperienced he is. This is just his third lifetime start having won a maiden last time, but he is a real nice horse for the future. It's a big ask but we're hopeful. New York Girl had a very good run in the 1,000 Guineas and I think the crop of three-year-old fillies are very strong. It's an open Irish Derby and, while I would have liked a better draw for all three of them, she goes there with a chance provided she stays.

Jessica Harrington, trainer of Gold Maze
He's in great form. He's under-raced and I think he's improved from his first run of the season. It looks a wide-open race and I actually think he's got a bit of a chance.

Emmet Mullins, trainer of King Of The Throne
We've always thought plenty of him, that's why we kept him in the race over the winter. We're hoping he will hold his own and run into a bit of prize-money. Rachael [Blackmore] had a big winner for me the other day and it would be great if they could team up for another big run.

Andy Slattery, trainer of Sunchart
If the showers come, the ground will be more suitable for him than it was at Leopardstown. He was lame for four days after it. It was a messy race too. He seems great now, but we did miss work with him. I do think we have him fit enough, though.

FIRST PUBLISHED 6:00PM, JUN 26 2020
Santiago's sailing in the Queen's Vase at Royal Ascot could hardly have been smoother

Is Snowfall the best filly O'Brien has trained? It's now a question worth asking Would you side with Snowfall or Love if they go head-to-head? Sublime Snowfall records biggest winning margin in Irish Oaks for over 100 years Can Breeders' Cup Mile winner Order Of Australia handle this tricky speed test? Best could yet be to come from Pretty Polly fourth Insinuendo The Queen is the owner to follow after Friday treble and fabulous fortnight