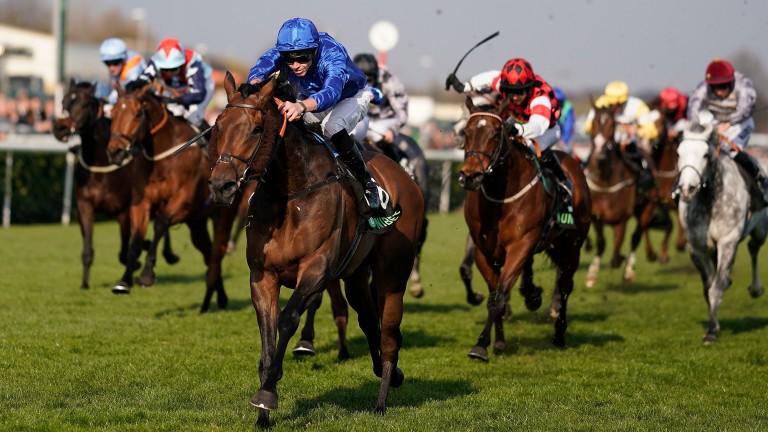 Auxerre leads the field in the Lincoln at Doncaster
Alan Crowhurst
1 of 1
By Andrew Dietz UPDATED 6:18PM, MAR 30 2019

Heavily backed 5-2 favourite Auxerre turned one of the most competitive mile handicaps of the season into a procession, returning the shortest-priced Lincoln winner since it was transferred to Doncaster in 1965.

Full of belief he was on the best horse in the race, James Doyle grabbed the early lead on the Godolphin-owned Auxerre down the centre of the track and the pair were not for passing as they held off the challengers before stretching clear to land the Unibet-sponsored race by two and a quarter lengths.

Doyle had been expecting to ride on Dubai World Cup night but was diverted to the opening day of the British Flat season and won the traditional curtain-raiser for the second year in a row following success on Addeybb.

It was also trainer Charlie Appleby's second Lincoln win, in his case from just two attempts after Secret Brief landed the race in 2016.

Many questioned whether the inexperienced Auxerre should be as short as the 4-1 price he was at the start of the day. He had made just four previous starts and the Lincoln had become a favourites' graveyard with the last one obliging in 2010 and upsets aplenty ever since.

However, the market moved strongly in the four-year-old's favour just before the off and he laid those ghosts to rest to the delight of favourite-backers and despair of bookmakers, who are now staring down the barrel with Tiger Roll set to go off a short-priced favourite for the Randox Health Grand National, which forms the second leg of what is popularly known as the Spring Double.

Doyle, who enjoyed a career-best season in 2018 with 156 winners in Britain and seven Group 1 victories worldwide, was always confident he was riding a horse possessing Group-race potential.

"He's lightly raced and had only run once before in a double-figure field and to go out and make all was impressive," he said.

"He was a little bit fresh and is going to improve a hell of a lot. He pulled quite hard going to the start and was a little edgy in the gates but that will settle him down. He was the unknown quantity in the race and I don't think we'll see him in handicap company again."

Regarding possible future targets for Auxerre, Doyle said: "I wouldn't tell Charlie what to do but I guess the path Addeybb went on last year with the race at Sandown [Group 2 Mile] could be an option and we know he can go with a bit of cut in the ground."

Doyle had mixed emotions about being at Doncaster rather than Dubai, but was delighted to get the domestic season off to a flying start.

"It was a shame to miss the big night at Meydan but it's certainly nice to come back and win the Lincoln," he said. "Charlie is so great to ride for. I spoke to him on his way to Meydan this morning and he just said 'you're there, I'm here, you sort it out, have confidence in the horse'."

Like Auxerre, Kynren came in for strong late support with his odds crashing to 9-2 (from 7), and he ran on strongly for second ahead of Linda Jewell-trained 40-1 shot Breden and fellow leading fancy Beringer (9-1).

Get exclusive insight from the track and live tipping with our up-to-the-minute Raceday Live service on the Racing Post mobile app - go to the Today tab in cards, click on a race and then click live, or click on the Raceday Live tab in news

FIRST PUBLISHED 3:49PM, MAR 30 2019
He was the unknown quantity in the race and I don't think we'll see him in handicap company again