Edouard de Rothschild will negotiate with the new government of Emmanuel Macron in the hopes of a new financial deal for racing
Martin Lynch (racingpost.com/photos)
1 of 1
By Scott Burton 2:30PM, JUN 21 2017

French racing's lavish prize-money structure could be in danger of a €25 million cut unless authorities can persuade the incoming political regime in Paris that the sport is in need of a new financial deal.

France Galop president Edouard Rothschild said of the forthcoming talks with the new government of Emmanuel Macron: "After the second round of legislative elections we now have a government in place, with negotiators ready to work towards a new agreement between racing and the state, and the development for the first time of a gambling policy."

France Galop reported a deficit of €38m in 2016, an accumulated result of sluggish betting revenues over the last six years as the French economy struggled to recover.

On Monday France Galop's administrative council approved a number of reports on economies prepared inside the organisation, as well as external work done across the PMU and the trotting authorities.

Among the last-ditch solutions tabled is a €25m cut to the annual basket of prize-money – which also includes premiums, travel allowances and contributions to refunding VAT payments – a sum which currently stands at €282m a year. 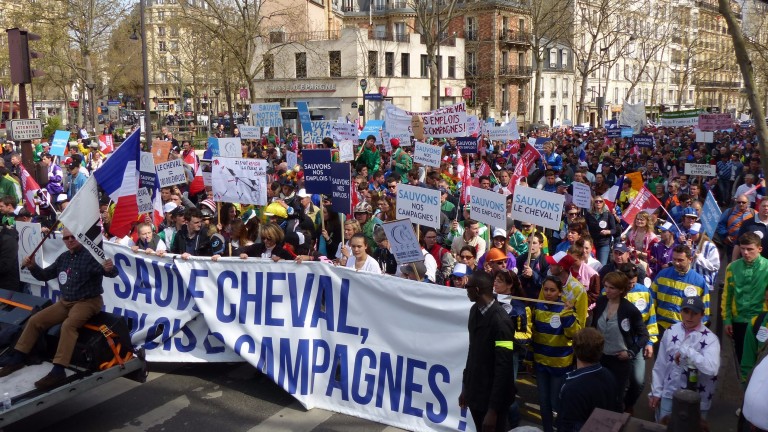 Up to 6,000 people joined the JPFC march in Paris to protest against the in play betting pilot being staged by France's lottery operato
Scott Burton / Racing Post
The administrative council agreed there will be no move to enforce any cuts to prize money until the negotiations have been completed and that, in the unhappy event of such a move proving necessary, France Galop is committed to returning to current levels as quickly as possible.

One of the most urgent matters for discussion with the new government will be the status of a pilot scheme for live sports betting, which was launched by the lottery operator FDJ in April but quickly suspended in the wake of protests from the racing industry.