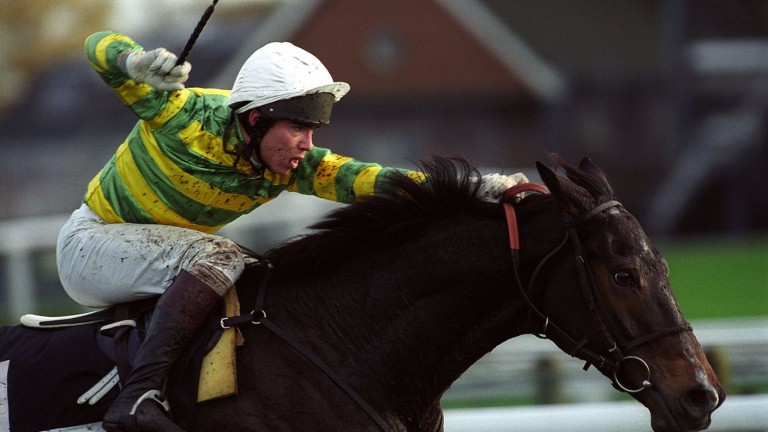 Baracouda was a four-time winner of the Long Walk, which Alex De Larredya is set to tackle next month
George Selwyn
1 of 1
By Scott Burton 6:45PM, NOV 8 2016

Alex De Larredya is set to provide a fascinating international angle to the JLT Long Walk Hurdle at Ascot next month, according to his in-form trainer Francois Nicolle.

Alex De Larredya, who carries the colours of Simon Munir and Isaac Souede, stormed to a seven-length success in the Grade 1 Grand Prix d'Automne at Auteuil on Saturday, leaving the Paul Nicholls-trained Ptit Zig and Aubusson in his wake.

Nicolle said on Tuesday: "I think the trip will suit him and the track will be fine for him. He's really well and didn’t have an unduly hard race, so we’re planning to go there."

Nicolle's compatriot Francois Doumen won four Long Walks with Baracouda, but at the moment there is no plan for Alex De Larredya to follow his example by heading towards the World Hurdle at the Cheltenham Festival next March.

"It's more a question of the programme book than any particular race," said Nicolle. "In March there are good races for him at Auteuil. Right now he's improving and, by the time Cheltenham arrives, it's more difficult to fit in a trip around the Auteuil programme."

Nicolle enjoyed a landmark weekend, with three-year-old hurdler De Bon Coeur waltzing to a nine-lengths success in the Prix Camabaceres.

Festival regulars hoping to see her in next year's JCB Triumph Hurdle look set to be disappointed as De Bon Coeur is also likely to be kept to Auteuil next spring.

"She'll be staying in France, primarily because her part-owner bred her and he'll want to keep her as a broodmare," said Nicolle. "I doubt you'll see her racing in Britain."

Nicolle saddled his first Cheltenham Festival runner this year when Le Curieux finished down the field in the Fred Winter Juvenile Hurdle.

FIRST PUBLISHED 6:44PM, NOV 8 2016
I think the the trip will suit him and the track profile will be fine for him. The horse is really well and didn't have an unduly hard race so we're planning to go there