Attraction imperious yet again as unique treble is landed 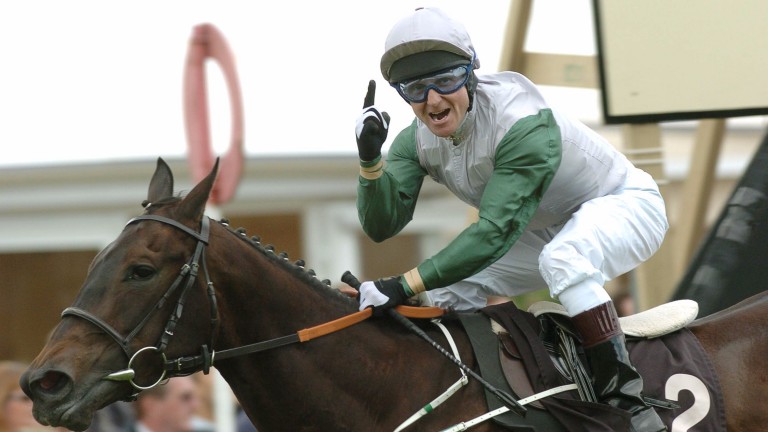 Kevin Darley celebrates as Attraction stretched her unbeaten run to eight with another dominant display in the Coronation Stakes
1 of 1
By Graham Dench 1:44PM, JUN 7 2017

In the latest in our series, with 13 days until Royal Ascot we look back at a memorable event from the summer showpiece from 13 years ago

Runaway 2003 Queen Mary winner Attraction returned to Royal Ascot for the Coronation Stakes unbeaten in seven races, having overcome ten months off the track with a cracked pedal bone and proven herself an extraordinary talent to complete a historic first Guineas double with dominant all-the-way wins at both Newmarket and the Curragh.

A filly with imperfect forelegs and far from regal breeding, she had originally been sent to Mark Johnston with the aim of simply winning a race and getting black type, a brief that had been completed within five weeks of her first setting foot on a racecourse. The rest then had all been a bonus, and what a bonus.

Ten fillies lined up against her in the Coronation on ground getting quicker by the day, but none could touch her on form and she was sent off odds against only because of a niggling concern about coughing in her yard.

Racing around a bend for the first time and drawn close to the rail, Attraction put up her best performance yet, quickly finding her rhythm at the head of affairs and quickening away impressively when asked to put the race to bed two out.

The form book confirms her winning margin over Majestic Bloom as two and a half lengths, but Attraction was value for significantly more as Kevin Darley had taken his foot off the pedal and passed the post wagging a finger in celebration. Even so, she was only 0.03 seconds outside the course record.

Darley recalls: "I got a bollocking from [owner] the Duke Of Roxburghe for that as he said she'd have broken the record if I hadn't been messing about!

"She had that unorthodox action, but she always felt perfectly balanced when you were sat on her. Her initial pace was frightening and you would think you must be going too fast, but she would just keep lengthening and keep finding for you.

"For me that was her most impressive win. She was certainly the best filly I ever rode."

Johnston described Attraction at the time as "the most phenomenal racehorse I have trained by a long way".

He has had many more top-class horses through his hands since, but there can never be another quite like her.

FIRST PUBLISHED 9:19AM, JUN 7 2017
You'd think you must be going too fast, but she would keep lengthening and keep finding. She was certainly the best filly I ever rode