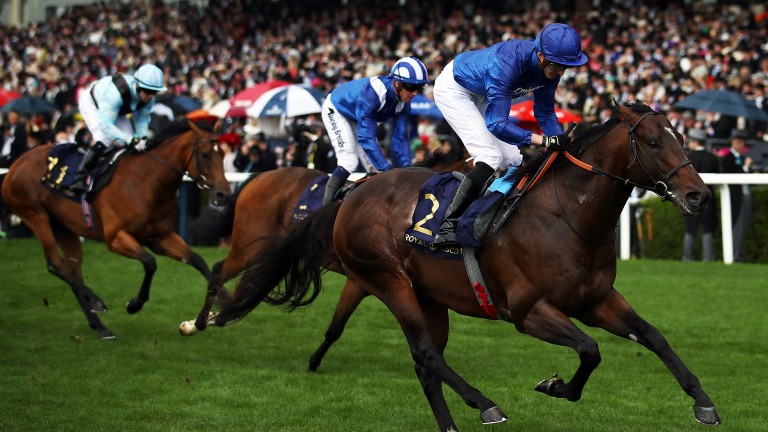 Blue Point, Godolphin's explosive sprinter who etched his name into Royal Ascot folklore by winning the King's Stand and Diamond Jubilee last week, has soared to the top of the latest standings for the Cartier Horse of the Year.

Trained by Charlie Appleby, Blue Point, who was retired on Monday, became only the second horse in 99 years to achieve the double and more dual honours could be heading his way if he ends 2019 as Cartier's Sprinter and Horse of the Year – a brace the lightning Lochsong last achieved in 1993.

The Cartier Racing Awards, now in their 29th year, take place in London on November 12 and points earned in Pattern races, awarded by an expert panel and voted for by Racing Post and Daily Telegraph readers and ITV viewers determine the main prize.

The five-year-old has 106 points, putting him ten clear of 1,000 Guineas and Irish 1,000 Guineas heroine Hermosa, who finished second behind Watch Me in last week's Coronation Stakes at the royal meeting.

Her Aidan O'Brien-trained stablemate Magical, third in the list with 80 points, also had to settle for second, losing out in the Prince of Wales's Stakes to Crystal Ocean, who joins Gold Cup hero Stradivarius in fourth with 64 points.

Hardwicke winner Defoe is next in the Horse of the Year race, his total of 56 putting him on a par with Persian King, successful in this season's Poule d'Essai des Poulains, while Lord Glitters, who won the Queen Anne Stakes at Ascot, has accrued 54 points.