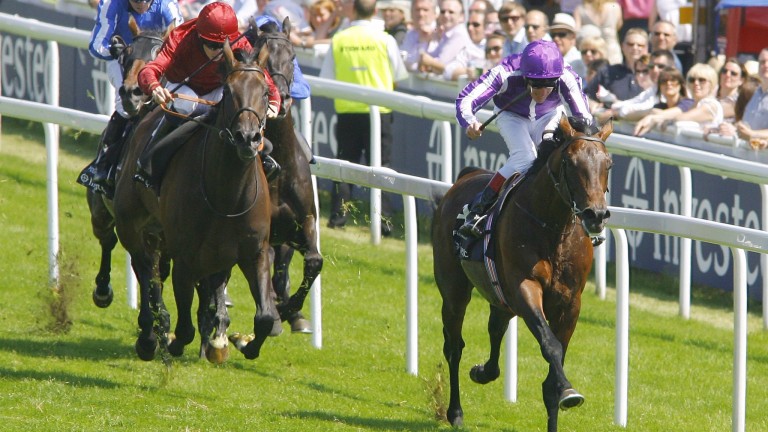 Fame And Glory, winner of the Irish Derby and Ascot Gold Cup in a career that included five Group 1 wins, has died at the age of 11.

The son of Montjeu won 14 of his 26 career starts, amassing more than £2.3 million in prize-money, starting with an unbeaten two-year-old campaign, including the Group 1 Criterium de Saint-Cloud.

Fame And Glory was reported to have died after suffering a suspected heart attack while covering a mare.

Albert Sherwood, manager at Grange Stud where Fame And Glory was standing, said: "It's a great shame as he was a grand horse and based on the quality of his stock, we thought he had the makings of a hugely successful stallion."

Sent off favourite for the Derby at Epsom, he was beaten by Sea The Stars before winning the Irish Derby in that superstar's absence.

Again beaten by Sea The Stars when sixth in the Arc, the Aidan O'Brien-trained horse beat the previous year's Oaks winner Sariska to win the Coronation Cup the following year before suffering the same fate in the Arc when finishing fifth to Workforce.

With Jim and Fitri Hay joining his Coolmore syndicate owners in 2011, Jamie Spencer took over from Johnny Murtagh in the saddle to win the Ascot Gold Cup and Champions Long Distance Cup.

Spencer said: "I am saddened to hear of his death. He was a great horse over several seasons for all involved and he won the ultimate staying prize in winning the Ascot Gold Cup.

"From a personal point of view, his victory in that race stands out as one of my favourite ever moments of the royal meeting."

Murtagh, who won the 2009 Irish Derby and 2010 Tattersalls Gold Cup and Coronation Cup on Fame And Glory, added: "He was a pure gentleman to deal with on the racetrack and even in the mornings when you were riding him out. He was a pleasure to have anything to do with, a real classy horse.

"One of my finest moments on him came when we won the Irish Derby together. We had been waiting for a clash with Sea The Stars in the race but it never came to fruition because of the ground.

"In the end we beat Golden Sword comfortably by five lengths but I think we would have been hard to beat no matter what we faced that day as he was in such good form.

"I was somewhat surprised to see how well he did over further when he won an Ascot Gold Cup. His class got him through. He will be sadly missed."

FIRST PUBLISHED 6:40PM, FEB 13 2017
He was a pure gentleman to deal with on the racetrack and even in the mornings when you were riding him out