Arthur's victory tour continues as Scotland revels in the spotlight 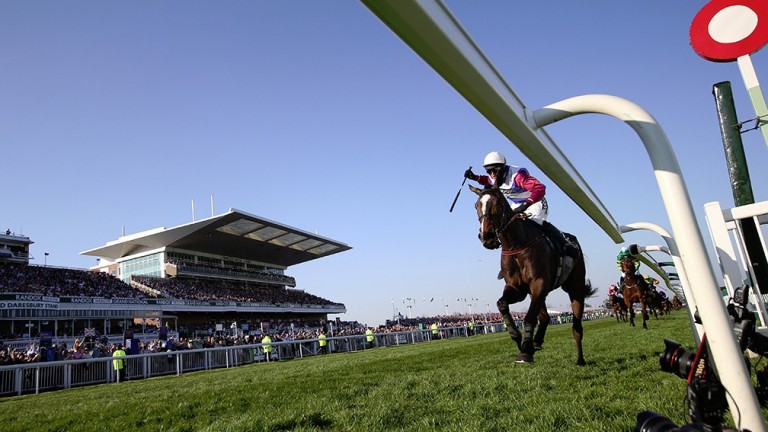 Grand National hero One For Arthur will be parading at Musselburgh on Saturday
John Grossick
1 of 1
6:00PM, APR 14 2017

Last week it was One For Arthur and one for Scotland. For the nation that celebrated only its second ever Grand National triumph, and its first in 38 years, Arthur's Aintree heroics kickstarted what is set to be an April to remember.

In seven days time the spotlight will fall on Ayr as the coastal town (or 'popular seaside resort', according to Visit Scotland) hosts the Coral Scottish Grand National, the most valuable and prestigious race staged north of the border.

As an aperitif, Scotland again takes centre stage on Saturday, with Musselburgh providing the base for both ITV4's afternoon coverage and the country's latest sporting hero.

Prior to racing, One For Arthur will make the short journey from his Kinross home to Musselburgh, where he will parade before admiring racegoers, who will also see groom Jaimie Duff finally presented with the trophy she was unable to receive last week because she remained at the side of the superstar horse in her care.

Musselburgh may not welcome as many equine headline acts as some of the sport's more glittering venues, but chief executive Bill Farnsworth is indefatigable in his mission to improve the quality of the course's fare. That effort has been rewarded here with a Saturday card that features what is, in effect, a brand new race, a £100,000 open handicap celebrating a recent visit by the sport's most famous patron.

The Queen last year came to Musselburgh to mark its bi-centenary, and although she will not be there for its Easter Saturday card, the contest run in her name, the Totepool Queen's Cup, has attracted a strong field that, like the preceding Royal Mile, boasts multiple runners fielded by northern Flat powerhouses Mark Johnston and Richard Fahey.

It's Easter - so it must be Kempton

Flat fans can also look forward to some decent early-season action at Kempton, where once upon a time the Easter Saturday card was a Classic trials occasion.

That is no longer the case, but although the Easter and Masaka Stakes have been dropped, the conditions races that replace them include some interesting youngsters.

Kempton's most valuable event is the Racing UK-sponsored Snowdrop Stakes, a Listed heat for fillies and mares the betting market for which will surely be headed by Godolphin's progressive Laugh Aloud.

Yet Kempton's most historic event is another prize named after the Queen, namely the Queen's Prize.

When staged on turf it was a handicap of some distinction. Much of that distinction has gone, but this year's running, scheduled for the end of the card at around the time the Grand National field was last week jumping the Canal Turn for the first time, is a really interesting affair, hosting leading 188Bet Chester Cup fancies Magic Circle and Endless Acres.

A short drive from Aintree's famous fences are those belonging to Haydock, which puts on a grand show of Saturday jumping.

Six of the seven races are the finals in the Challenger Series, aimed at horses bracketed just below the highest level. Pleasingly, quite a few of them running at Haydock are trained in the north, including Mumgos Debut, representing Grand National winners Lucinda Russell and Derek Fox.

One week on, those words will sound no less sweet to Arthur's happy humans.

FIRST PUBLISHED 4:39PM, APR 14 2017
Groom Jaimie Duff will be presented with the trophy she was unable to receive last week because she remained at the side of her superstar horse

'It's like T20' - changes promised after new £1.8 million series gets going 'He knows what he's doing' - longer trip no problem for Goldie star Tommy G Bookies call Sunday Series 'an absolute winner' after promising day one turnover Big-priced outsider Abel Handy has early pace to outrun his odds 'He should have a very good chance' - Tim Easterby keen on Danzan's prospects Why Keith Dalgleish's prolific stayer might struggle to land another success