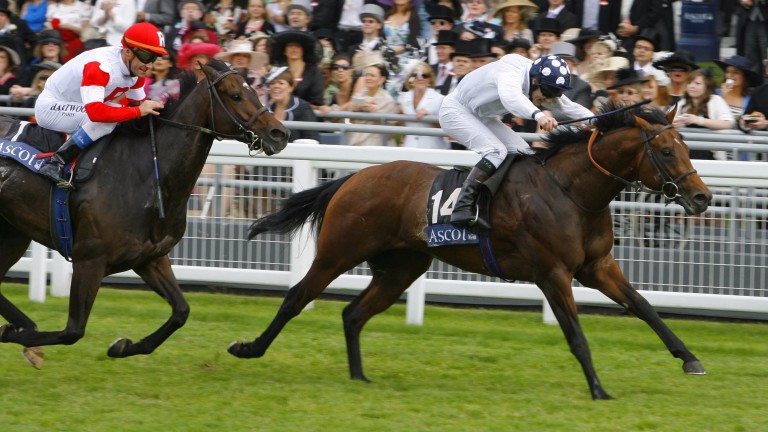 With eight days to go until Royal Ascot our countdown series has reached eight years ago, when there was a typically strong overseas challenge for the Golden Jubilee. But it was not strong enough . . .

In 2009, Michael Bell celebrated what remains his biggest Royal Ascot victory when Art Connoisseur overcame a cosmopolitan field in the Group 1 Golden Jubilee – and no-one was more surprised than the trainer.

The victory of the 20-1 chance was also a notable landmark for jockey Tom Queally as it was his first win at the highest level, and only came about because of an episode in the stewards' room a few weeks beforehand.

Bell recalls: "Jamie Spencer was supposed to ride Art Connoisseur at Royal Ascot but was suspended. I remembered I owed Tom Queally a favour as he had tried no histrionics in the stewards' inquiry into the Oaks at Epsom just a few weeks previously when Sariska had beaten his mount Midday."

Owned by Richard Green, Art Connoisseur had been a speedy two-year-old in 2008, winning his first three races including the Group 2 Coventry Stakes at the royal meeting – something that stood him in good stead a year later.

The son of Lucky Story then went on to taste defeat for the first time at the hands of Mastercraftsman in the Group 1 Phoenix Stakes at the Curragh that year and was put away after disappointing next time.

Bell continues: "We ran him in the Free Handicap on his return in 2009 but he didn't stay so we decided to go back to sprinting. I'd earmarked the Golden Jubilee for him as he'd acted so well at Ascot the previous year when winning the Coventry, and not every horse takes to the track as well as he did."

With international stars – South African favourite J J The Jet Plane, US hope Cannonball and Hong Kong raider Sacred Kingdom – lying in wait, Bell had enough on his plate without a setback.

He adds: "Unfortunately, he popped a splint about three weeks before the race and we had to get him fit in the swimming pool.

"You could say we were not exactly brimming with confidence beforehand, but Tom gave him a lovely ride up the stands' rail to hold Wesley Ward's Cannonball by a neck and it was nice to pay him back for his kindness at Epsom."

FIRST PUBLISHED 9:00AM, JUN 12 2017
Unfortunately, he popped a splint about three weeks before the race and we had to get him fit in the swimming pool