Arrogate v Frankel - how does Cup hero match up to a legend? 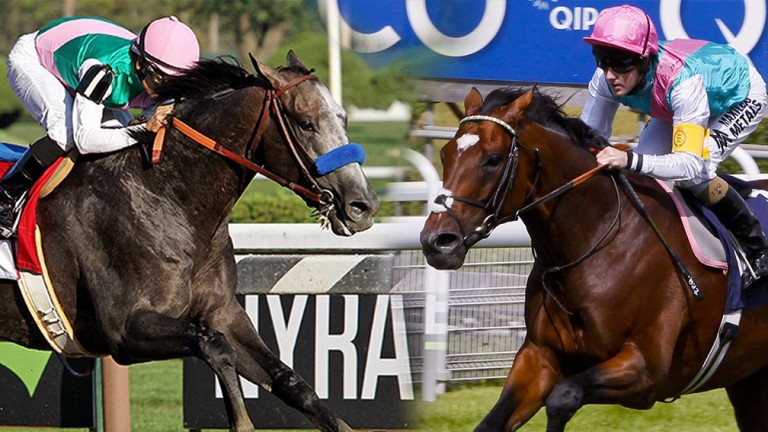 Comparing any two racehorses is a tricky business, let alone two stars strutting their stuff at different times, on different surfaces and in different continents.

However, in Arrogate and Frankel we have been fortunate to enjoy two horses who seem to reconfigure what's possible every time they step on the racetrack and it is therefore inevitable that racing enthusiasts worldwide will ask the question: which of the Juddmonte-owned superstars is the greatest?

It would be a little harsh to attach too much significance to this one, given Arrogate's career is not over yet and indeed had not even started this time last year. Four of Arrogate's eight career starts have been at the highest level and he is unbeaten in Grade 1 company. That stands up perfectly alongside Frankel, who at the same stage of his career had also won four Group 1 races.

More often than not, when Arrogate wins, he does so with authority. That said, had California Chrome performed up to scratch in the Pegasus World Cup, the grey's average winning margin might be a little narrower.

In Frankel's case, outside his debut defeat of Nathaniel, the only time he was ever in any danger was when he beat Zoffany by three- quarters of a length in the St James's Palace Stakes, in which he was clearly not at his very best.

Arrogate stacks up impressively with Frankel in this regard, especially given how few starts he has had. One of the hallmarks of Frankel's greatness was that he was not only beating all-comers but that, had they raced in other eras, the likes of Cirrus Des Aigles, Farhh and Excelebration could have been champions in their own right.

It helps Arrogate that California Chrome pushed him so hard at Santa Anita and with Gun Runner second and having seemingly run a fine race at Meydan, Arrogate's profile is starting to have a similar look.

In this category, Frankel is well in command of the new kid on the block, with his peak RPR achieved twice in 2012 in both the Queen Anne Stakes and the Juddmonte International. Indeed, on seven occasions Frankel either matched or bettered Arrogate's 136.

With California Chrome off the scene, unless a high class three-year-old emerges to serve it up to Arrogate in the Breeders' Cup Classic, he may struggle to push it to Frankel heights.

That is not a typo. Perhaps the most staggering statistic about Arrogate's rise is the fact that after only 11 months of racing, he is the highest-earning horse of all time.

With the Dubai World Cup never a target for Frankel and the Pegasus World Cup or similar concepts not in existence, it is hard to see how Frankel could have got any closer to Arrogate's haul without connections rolling the dice to contest a Derby and Arc at a mile and a half. Even then, Arrogate would still be way out in front.

With his performance on Saturday, Arrogate proved he is capable of overcoming adversity to win with authority, something Frankel was also able to do, as in his final outing at Ascot when missing the break badly in the Champion Stakes.

Frankel never ventured any further than York, while Arrogate has been not only all over North America but now to the Middle East as well and so could be said to be the better traveller. However, given the nature of dirt racing, it would be fair to say Arrogate has never been tested by different racecourses the way Frankel was.

There is little similarity between Newmarket's Rowley Mile, Goodwood and York, for example, whereas Arrogate has done his work on left-handed, flat tracks.

Here is where we complete our journey away from objective number study and make our way towards the subjective as we try to reach a verdict.

While Arrogate's burst on to the scene and subsequent dominance has been thrilling, it is still hard to feel he can truly be considered up to the level achieved by Frankel.

The American horse has astonishing reserves of stamina that allow him to produce the kind of sectional time performances on dirt that make heads spin. He is simply more powerful than his rivals when it matters most.

But there was something altogether otherworldly about Frankel, who was able to annihilate high-class rivals a long way from home by virtue of his electric speed.

Arrogate could well be the best dirt horse we have ever seen but Frankel breathes air that is rarer still and for now remains untouchable this century.

FIRST PUBLISHED 2:15PM, MAR 28 2017
Arrogate proved he is capable of overcoming adversity in a race to win with authority, something Frankel was also able to do