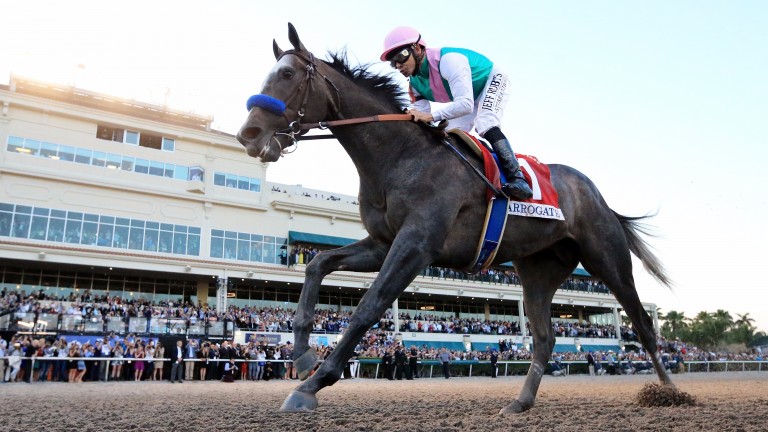 Arrogate coasts to victory in the inaugural running of the Pegasus World Cup in January; next year's race will be worth $4m more
Mike Ehrmann/Getty Images
1 of 1
By Nicholas Godfrey in Miami 11:22AM, MAR 13 2017

They call him 'Big Money Mike' for a reason. With a record second to none in top-dollar races, jockey Mike Smith certainly knows the value of a dime but even he admitted to some butterflies before riding the favourite Arrogate in the first running of the world's richest race at Gulfstream Park on Saturday.

Indeed so, in financial terms if nothing else: the Breeders' Cup Classic is worth $6 million, while the inaugural Pegasus World Cup was worth $12m, with $7m going to the winning connections, a decent chunk of which was heading Big Money's Mike's way after what was little more than a walk in the park for the Bob Baffert-trained Arrogate.

Everybody said it would be a two-horse race and everybody was wrong. The inaugural Pegasus World Cup was the very definition of a one-horse race as Arrogate comfortably claimed the cash.

Among those left trailing in the big-striding galloper's shadow was America's most popular horse California Chrome, who exits the scene for stud duties after a thoroughly underwhelming showing. Clearly the sentimental choice of the Florida crowd, the newly crowned Horse of the Year could beat only three home, virtually pulled up nearly 30 lengths behind his arch rival. It later emerged he had some fluid on a knee.

If the Breeders' Cup Classic had been an epic two-horse war, this was a less extraordinary rendition, a sequel lacking the drama of the original. However, one of the lead actors gave a sensational performance, as Arrogate showed just why he is the world's
top-rated racehorse.

Carrying the colours of Khalid Abdullah's Juddmonte operation, he was utterly dominant; in hindsight, the result was not in any serious doubt from the moment Smith moved him out sharply from the potentially troublesome inside berth.

He sat third on the rail a couple of lengths behind front-running Noble Bird before Smith moved him three wide on the far turn and the lanky roan colt stretched his legs. He strolled home nearly five lengths clear of Grade 1 winner Shaman Ghost.

"I say this with all due respect to the other horses – he got to gear down for the last good hundred yards," marvelled Smith. "He's got some turn of foot and some stride. Once I got out going into the far turn, I knew we were going to be tough to beat. Once I got out, I was loaded; he was gone. As far as winning the world’s richest race, I’m absolutely numb."

Baffert, who also admitted to pre-race nerves, stood in awe of Arrogate. "You know what? He's a superior horse," said the west-coast legend. "He’s just a great horse. To be able to train a horse like that is pretty incredible. When he made that move at the three-eighths pole I knew right there: boy, this horse is throwing into the gears. It was going to take something really special to run him down."

Baffert declined to compare the winner to his Triple Crown hero American Pharoah, however. "It's like trying to compare your two children," he said.

Gulfstream has not hosted a large-scale event like this for nearly two decades since the most recent of the venue's three Breeders' Cups. A $100 minimum admission price ensured things never become too uncomfortable for an enthusiastic crowd that grew gradually throughout a 12-race card; by post-time for the main event a few sections were verging on the raucous.

Arrogate shaded favouritism but there was also little doubt which horse the majority were supporting: the 'Vote Chrome for President' button badges were a bit of a giveaway on that score.

The six-year-old received boisterous cheers while being led to the saddling boxes and during the post parade, where mention of his name over the PA was the cue for whoops and hollers from a crowd four or five deep on the rail, mobile phones aloft.

But the 'Chromies' were to be disappointed. Although they gave their vanquished hero a hearty reception as he cantered back past the stands, it was to be Arrogate on the front page of Miami's Sunday papers, and it was Mike Smith who was fist-pumping the skies and pointing to the heavens after the race.

Looking to the future, Arrogate's defence of his Breeders' Cup crown is Baffert's priority this season, and the trainer also mentioned coming back to the Pegasus again in 12 months' time. Dubai, though not entirely ruled out, seems an unlikely prospect. "Today obviously was the primary goal," said Garrett O'Rourke, Juddmonte Farms' US manager. Mission accomplished.

FIRST PUBLISHED 11:21AM, MAR 13 2017
I say this with all due respect to the other horses, he got to gear down for the last good hundred yards. He's got some turn of foot and some stride