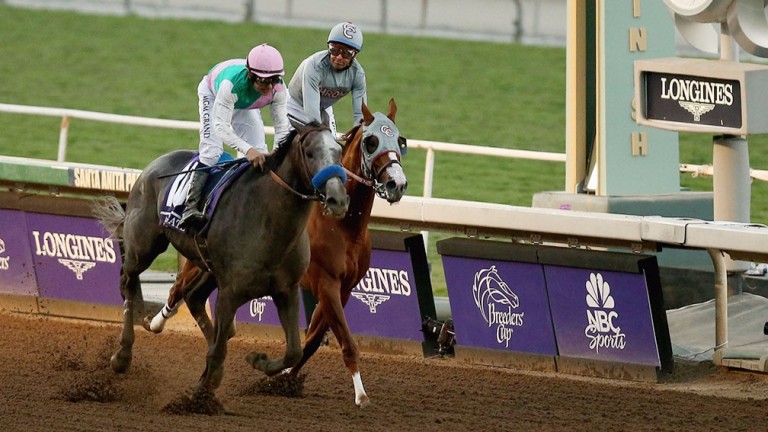 Arrogate (left) and California Chrome will clash on Saturday
Edward Whitaker
1 of 1
By Tony McFadden 11:33AM, JAN 9 2017

Breeders' Cup Classic winner Arrogate stepped up his preparation for the Pegasus World Cup, and a mouthwatering rematch with California Chrome, with a racecourse gallop at Santa Anita on Sunday.

Eager to get some work into Arrogate ahead of the inaugural running of the $12 million Pegasus World Cup on Saturday January 28, trainer Bob Baffert sent the colt for a spin around Santa Anita having withdrawn him from an intended run in the San Pasqual Stakes last week because of a wet track.

The highest-rated Flat horse in the world completed six furlongs in 1min 11.94sec. After the gallop Baffert said: "It's good, I was happy. He got the work in and that was important. We got some nice, stiff work into him."

Arrogate's finest hour came when overhauling California Chrome late on in the Breeders' Cup Classic in November and Baffert believes his horse is at his most effective when given a target to chase.

He said: "He has an idle tendency – he likes to chase something. He has a tremendous drive and his stride is his biggest weapon."

Arrogate's big rival California Chrome stretched his legs on Sunday with a jog around Gulfstream Park, the track set to stage the world's richest race.

Having jogged around one circuit regular workrider Dihigi Gladney suggested that a fresh California Chrome would benefit from another lap.

"He was feeling really good, so we decided to take him another lap," Alan Sherman, assistant to trainer Art Sherman, told the Blood Horse. "It's easier on everybody when he gets a little bit out of it. Otherwise he just feels so good and gets a little tough to handle."

FIRST PUBLISHED 11:33AM, JAN 9 2017
He has a tremendous drive. His stride is his biggest weapon