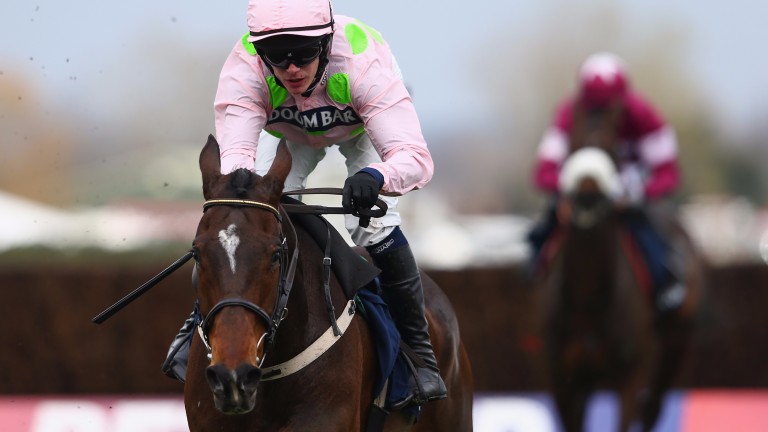 Paul Townend will be back on board superstar chaser Douvan in the Hilly Way at his local track in Cork
Michael Steele
1 of 1
By Brian Sheerin 12:52PM, DEC 11 2016

Already just a 4-6 shot with the sponsor for the Betway Queen Mother Champion Chase, Rich Ricci’s superstar chaser Douvan tackles seven rivals on his eagerly-awaited return to action in the Hilly Way Chase at Cork (2.15) today.

While a field of eight is nothing to write home about, the six-year-old has never encountered this many rivals over fences before.

Since announcing himself as a top-notch prospect when winning the 2015 Supreme Novices’ Hurdle, the son of Walk In The Park has stretched his unbeaten run to ten for trainer Willie Mullins and recorded five Grade 1 wins over fences, including victories at Cheltenham, Aintree and Punchestown.

With regular rider Ruby Walsh engaged at Punchestown, former champion jockey Paul Townend is set for the thrill of partnering the hugely exciting chaser again at his local track.

Townend said: "I'm very grateful for the opportunity and it's hugely exciting, especially at my local track. I have ridden him before and am looking forward to it."

Mullins, who has won eight of the last nine Hilly Ways, added: “We are looking forward to Douvan making his first appearance of the season. Everyone knows the high regard we hold him, and after an excellent novice hurdle campaign he was unbeaten as a novice chaser last season as well.

“He is in good form and we decided to stay local with him for his seasonal debut, picking this race instead of sending him to Sandown for the Tingle Creek."

The trainer added: “He's a good jumper and the two-mile trip will suit. We are hoping that he can put in a good round and make a successful start to the season.”

The Game Changer finished behind Douvan at Cheltenham, Aintree and Punchestown last season and looks unlikely to be helped in his bid to turn the tables by the ground.

Trainer Gordon Elliott said: “With Douvan in the race it’s going to be difficult, but he’s fit and well and we hope he can run his usual good race. The ground is a worry as he needs good ground to be at his best.”

Henry de Bromhead is the only other trainer bar Willie Mullins to have won the Hilly Way since 2006, winning in 2012 with Days Hotel, who is back for more.

“He’s been a fantastic servant down through the years for us and we are looking forward to running him," said the trainer. "It’s a very good race, but there is good prize-money on offer and hopefully he can run well."

Randox Health Grand National-bound Gilgamboa was only narrowly touched off by Arctic Skipper in the Fortria Chase at Navan on his seasonal debut, and Enda Bolger is hoping his charge can make the frame at least.

“All roads lead to Aintree for him and we are keen not to stretch him out just yet with regards trip,” said the trainer.

“We are well aware of the task at hand with Douvan in the line-up, but there is plenty of place prize-money on offer."

FIRST PUBLISHED 6:00PM, DEC 10 2016
We are hoping that he can put in a good round and make a successful start to the season