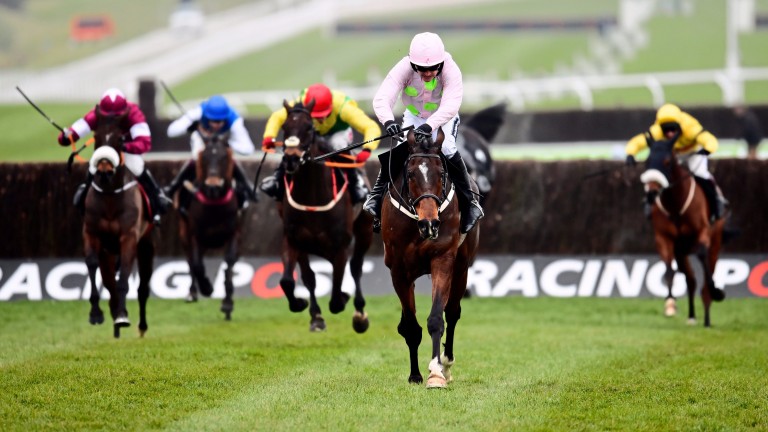 Racing Post Arkle winner Douvan could be set to reappear at Sandown on Saturday
Mike Hewitt
1 of 1
By Graham Dench 6:59PM, NOV 29 2016

But he is realistic enough to know that Willie Mullins could scupper what promises to be a huge day for the family at Sandown with either Douvan, odds-on favourite for the Queen Mother Champion Chase, or Un De Sceaux.

Either Mullins entry would test the mettle of the Moore pair, but the trainer, whose divided loyalties will extend to his riders – with sons Jamie on Sire De Grugy and Josh on Ar Mad – believes both have plenty in their favour.

Moore said: "So far as I’m concerned Sire De Grugy wasn’t far off his best form at Ascot the other day and, on a line through Vaniteux, who was third, he beats Ar Mad, who only beat Vaniteux at Kempton because he outstayed him.

"But if you go back to last year's Tingle Creek day when Ar Mad won the novice chase, Ar Mad is about five seconds [around 25 lengths] quicker than Sire and would have been ahead at every stage of the race."

Ar Mad impressed in four front-running novice wins, notably when a bold-jumping ten-length winner from Bristol De Mai in the Grade 1 Henry VIII Novices' Chase on the Tingle Creek undercard, but he suffered a leg fracture in the lead up to Cheltenham when a major fancy for Arkle.

Moore said yesterday: "Ar Mad is as ready as I can get him at home and he's a busy horse, so you would think he would get fitter quicker than some, but last year he ran bad in a donkey race at Plumpton first time. Everything went wrong that day, though, so I'm hoping it's not a reflection of what might happen first time out again this year.

"He schooled this morning, because I was a bit worried when I saw it could get down to -5C overnight, and he was just electric. He loves to jump and that’s what makes him the horse he is."

The Tingle Creek was reopened when only eight entries were received on Monday, but with triple Grade 1 winner God's Own and recent Haldon Gold Cup winner Sir Valentino both set to represent Tom George, and last year's third Vibrato Valtat an entry for Paul Nicholls, it is already looking well up to standard.

Douvan was unbeaten in six chases last season, including the Racing Post Arkle, while Un De Sceaux was second to Sprinter Sacre in the Champion Chase.

Mullins confirmed he had made the entries but added: "There are no plans yet. It will be another couple of days before any decisions are made."

Ar Mad and God's Own also have entries in Sunday's Betfred Peterborough Chase at Huntingdon, but Sandown is the preference for both.

With regard to the Peterborough Chase entry, Moore said: "The Tingle Creek is my preference, because I would sooner start him off at two miles than two and a half, but that might change if Sandown was frozen off or if the ground there was nearer good than good to soft.

"I'm going to talk to Ar Mad's owner Ashley Head and have a good look at the entries. We'll be keeping options open until later in the week."

George, whose impressive Huntingdon winner Max Ward is among only six entered for the Henry VIII, also reopened, hopes to run both of his Tingle Creek entries and is encouraged by the dry forecast.

He said: "It looks as if God's Own might get his ground and he's as fresh as paint. You would never know he ran at Ascot on ground too soft for him just over a week ago.

"Sir Valentino has got to improve again, but he warrants his place in the line-up."

Sandown clerk of the course Andrew Cooper confirmed that no rain is forecast this week, although he does not expect much drying out.

Cooper said: "It's currently good, good to soft in places on the chase course, where I would say 50 per cent of the track is proper good ground, and good to soft, good in places over hurdles, which represents a slight tightening up over the last 36 hours.

"If the weather forecast is correct we should be fine, as Monday and Tuesday are set to be the coldest nights, and then the rest of the week it's above freezing, albeit not far above."

FIRST PUBLISHED 4:21PM, NOV 28 2016
He's a busy horse, so you would think he would get fitter quicker, but last year he ran bad in a donkey race at Plumpton first time